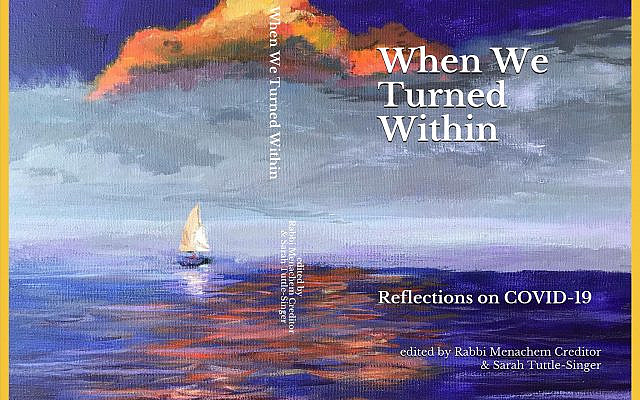 When We Turned Within: Reflections of COVID-19, painting by Rabbi Karen Byer Silberman

During the past months, our world has truly turned upside-down. We’ve lost so very much. What was casual just yesterday has become priceless today: smiles are covered beneath masks, generations divided by invisible boundaries, and physical togetherness deemed a danger.

Ever since the news about a new virus began to eke into the news early this year, and the numbers began to rise — the sick, the dead — people we love, parents of close friends… As we careen through this new abnormal, this strange new world of face masks, of social distancing, where the world is at our fingertips, but seeing each other’s face requires a screen, we have felt a palpable sense of grief.

And yet. Harmonies have been sung from balconies and bedrooms spanning the globe. Applause regularly erupts for cashiers and sanitation workers and nurses and those everyday heroes who keep the world balanced.

And yet. Synagogue buildings are empty and the comfort of a minyan has become digital. Funerals are hug-less, as are inter-generational family moments. And the number of souls we’ve buried… There simply aren’t words.

And yet. The skies are clearer and birdsong has returned. More people have convened for many a Zoom meal or online class than ever could have in person. We have come to know our neighbors just a bit more.

And yet. Amidst all this, protests erupted in reaction to the horrific killings of George Floyd, Breonna Taylor, Ahmaud Arbery, unarmed black people whose deaths have sparked an international response, shining light on the systemic racism and injustice that have cast a long, harsh shadow on the United States since its earliest days. The pandemic exacerbated already-present inequalities, and the murders in 2020 America of three human beings for the colors of their skin gave this injustice a face.

And yet. The responses to racism and isolation are growing in volume, and the voices of common citizens of all colors and orientations and faiths are calling out for justice, for an honest reckoning with the way things have been, for the end of all that keeps us apart, for a world in which no virus nor societal illness can deny a person their breath.

A few weeks ago, my friend Sarah Tuttle-Singer and I  launched a special project: to collect stories, poems, and prayers being written by so many people from all over the world — people weathering the same storm, riding the same waves in their different ways, all of us as individuals and as a community. The project took a name: “When We Turned Within: Reflections of COVID-19.”

Our book is much more than a record of loss. It is a collection of reflections, prayers, and poems of many, many individual souls — 165 to be exact — who collectively tell the story of right now with depth and heart and startling brilliance. On the pages of our collection you will find honest testimony of a very difficult time on our planet.

It has been truly humbling work to assemble these voices and see patterns emerge, to feel the pain and longing and hope and faith and frustration and loneliness and transcendence of each contribution. We are more convinced than ever that all people share a common humanity, that our souls bind us together, that a better day is possible. Toward that collective spirit, we made the decision to send all proceeds from sales of “When We Turned Within” to support the COVID-relief work of UJA-Federation NY, where more than $46 million has already been allocated to meet needs across the New York region and Israel for the most vulnerable people.

The arc of history will only bend toward justice under enough pressure, and the glorious weight of us all will be enough. May the days ahead be better – for all people – than those we’ve left behind.

The above was co-authored with Sarah Tuttle-Singer