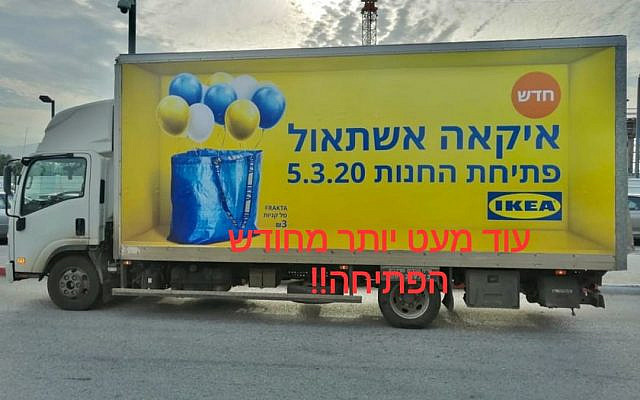 IKEA continues to expand in Israel with its newest store due to open on March 5, 2020 at Moshav Eshtaol as the sign read.

IKEA is a European multinational group that designs and sells ready-to-assemble furniture, kitchen appliances and home accessories, among other useful goods and occasionally home services. IKEA has stores in Israel, Egypt and Jordan.

An IKEA store near Beit Shemesh is expected to open on March 5, 2020. The new store will cover an area of ​​25,000 meters in the Har Tuv Industrial Zone.  This will be the fifth IKEA store to open in Israel. IKEA’s first Israeli store opened in the coastal city of Netanya in 2001, and was followed by branches in Rishon Lezion, in the center of the country; in Kiryat Atta in the north; and, earlier this year, in the southern city of Beersheba.

Regarding the stores in Egypt and Jordan, IKEA management must have had enough confidence to allow their stores to expand into these two countries for at least one very important reason. Both countries have signed a peace treaty with Israel.

The Israel–Jordan peace treaty or in full “Treaty of Peace Between the State of Israel and the Hashemite Kingdom of Jordan” (Hebrew: הסכם השלום בין ישראל לירדן‎; transliterated: Heskem Ha-Shalom beyn Yisra’el Le-Yarden; Arabic: معاهدة السلام الأردنية الإسرائيلية‎; Arabic transliteration: Mu’ahadat as-Salaam al-‘Urdunniyah al-Isra’yliyah), sometimes referred to as Wadi Araba Treaty, was signed in 1994. The signing ceremony took place at the southern border crossing of Arabah on 26 October 1994. Jordan was the second Arab country, after Egypt, to sign a peace accord with Israel.

Therefore, doesn’t it make perfect sense for the Palestinians to put down their arms, dismantle those rockets and come to the bargaining table to sign a genuine peace agreement with Israel?

The current Palestinian position toward Israel has not changed. Since Israel was granted its independence, the Palestinians have had the view that Israel should not exist.

But the reality is that Israel is a strong and growing nation, which will continue to get stronger as each day passes. Egypt and Jordan saw that reality a long time ago. It was Egypt and Jordan who fought alongside other Arab nations against Israel in the major battles that took place. Egypt and Jordan changed their attitude toward Israel and they have benefitted tremendously from this decision.

What Could Happen If The Palestinians Sign A Genuine Peace Agreement?

Let’s assume that now those rockets have been dismantled, and the Palestinians agree to work toward a genuine peace agreement by laying down their weapons.

Israel would work with them to rebuild their towns and cities. This would mean improved housing for its citizens as well as improved medical facilities. Schools would be built, office buildings would rise from the ground and many other benefits would be available for its residents.

Once this takes place, major overseas companies like IKEA would suddenly appear on the scene to offer their services and products to the Palestinians. And this would result in a winning formula which creates a more vibrant economy which benefits its entire people for many years to come.

IKEA Was Smart To Expand In The Beit Shemesh Area

Anyone wanting to see why IKEA chose Beit Shemesh must come for a visit. Once you reach the outskirts of the newer part of the city, you will see a massive amount of housing developments under construction. Naturally, once they are near completion, there will be a sharp increase in demand for the products IKEA sells.

IKEA’s new location is only 30 kilometers from Jerusalem which does not have its own IKEA and therefore, there will be many people travelling to this new store from the Holy City and surrounding areas to purchase products for their homes or offices.

Of Course, This Is All A Dream At The Moment

It is very sad that the Palestinians are unwilling to see the benefits that will result from a genuine peace agreement with Israel. They continue to blame Israel and its government for the situation they find themselves in. But the reality is that the Palestinians themselves are to blame. Their attitude will affect future generations to come if they continue to avoid making genuine peace with Israel.

Unfortunately, IKEA and any other major international corporations are unlikely to want to enter the Palestinian Territories or any other Arab country that does not recognize the fundamental right of Israel to exist. Egypt and Jordan got the message a long time ago, it remains to be seen when the Palestinians will do the same.

About the Author
Born and raised in the Minneapolis suburb of St. Louis Park. Married to a South African, we lived in Johannesburg from 1979 to 1996. Made Aliyah with our seven children on Parshat Lech Lecha. BSB Accounting Degree from the University of Minnesota. Investment Portfolio Manager and Analyst. Served in the US Army Reserves Semi Retired spending quality time with my wife, children, grandchildren and attend Kollel while analyzing current events as they relate to Torah and Mitzvahs.
Related Topics
Related Posts
Comments