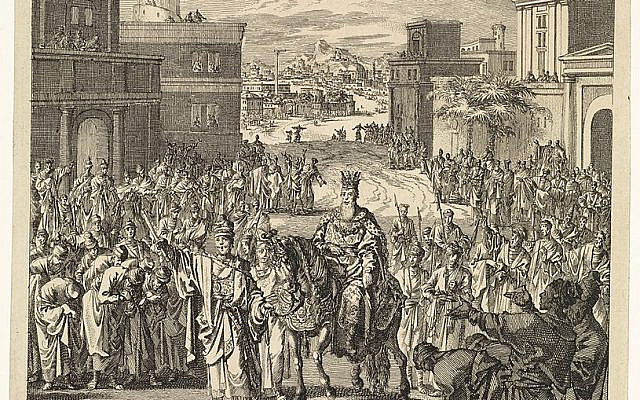 When Moses first inducted his brother Aaron into the office of the High Priest he led him to the door of the Tent of Meeting, washed him and garbed him in his new, splendid regalia. He began to conduct an elaborate, sacrificial ceremony involving a bull, two rams, and three different types of unleavened bread. Moses did everything according to the instruction he had received from the Most High.

God’s instruction to Moses to ordain Aaron and his sons began with the statement “And this is the thing which you shall do to them to sanctify them…” (Ex 29,1). It is not the most economical use of language and the unusual phrasing caught the eye of the ancient bible interpreters, the compilers of the Midrash. What extra meaning, they wondered, is added by the apparently superfluous words “this is the thing which you shall do”? Why not just say “this is what you shall do?”

The Hebrew word translated as ‘thing’ can also be translated as ‘word’, and this is the sense in which the interpreters understood the verse. They read it as; “This is the word that you shall make for them to sanctify them”. They then tried to explain what this word was.

They turned to a verse from the prophet Hosea: “Take words with you and return to the Lord”. Words, according to Hosea, seem to be a route through which humanity can reach God. Words therefore, they reasoned, were the most effective instrument for the priest to use, when acting as a conduit between the nation and God. Although the priest’s regular activity was to offer sacrifices, it seems from this analysis that the Midrash considered words to be preferable.

Having stressed the importance of words, the Midrash deviates to a new subject. It quotes from the very end of Deuteronomy: “There is none like God. … who will drive the enemy from before you.” (33,27-8). The enemy in this verse, the Midrash explains is Haman, the archetypal anti-Semite. He is specifically referred to in the Book of Esther as ‘an oppressor and enemy.’

There seems no real reason to introduce Haman at this point, he has nothing to do with the induction of Aaron.  But the compilers of this Midrash, who probably followed the Babylonian cycle of Torah reading, were aware that the passage describing Aaron’s induction into office is frequently read in synagogues just before Purim, when the Book of Esther is read.  By intorducing Haman, the Midrash is trying to weave two themes together, and does so skilfully, if a little artificially.

In the Book of Esther Haman is obliged by the king to honour Mordechai by parading him, dressed in royal apparel and on horseback, through the streets of Shushan, the capital city. It is a deeply humiliating experience for Haman. But Mordechai does not revel in his new glory. When the parade is over he removes his royal garments. He returns to the city gate where, dressed in sackcloth, he has been humbly entreating God to overturn Haman’s plan to exterminate the Jews. He succeeds. Through his prayers, and the actions of Queen Esther, the Jews are saved. Haman is defeated.

Aaron is inducted into office wearing his exquisite priestly garments. Mordechai is honoured in the street of Sushan in royal clothes. But, according to the Midrash, it is not the honour granted to Mordechai that saves the Jews, nor is it the regalia he is dressed in. It is the simple words of his prayers, nothing more elaborate, that bring salvation.

Similarly,  it will not be the clothes that Aaron wears which ensure that he is successful in his priestly ministering. It will be his words, and the sincerity with which expresses them. That’s why his induction ceremony is introduced by the phrase “This is the word that you shall make for them to sanctify them”.