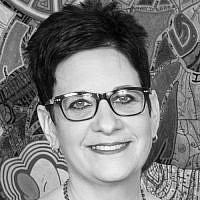 I’ve had some experience with being invisible. A variety of circumstances and situations have all caused me to feel unseen at different times in my life. I’ve been a fat teenager and young adult in a culture obsessed with weight and looks, and I was single well past the age when all my friends were already married and having children. I was non-observant in an ultra-Orthodox home, and a lesbian in an environment where heterosexuality was presented as the only option. It’s hard to find balance between desperately wanting to fit in and therefore not stand out as different, while at the same time trying to live one’s truth. It’s painful to be aware of the fact that to be visible to others, you also have to allow yourself to stay partially invisible. Sometimes that means that you have to hide a piece of who you are or how you really feel, and sometimes you are hidden because there is no place for you at all.

These days, I’ve gotten fairly adept at making sure that my voice is heard and that I am seen. I spent much of my childhood being painfully shy and trying to be perfect by never expressing an opinion or stating a clear preference for anything. I’ve more than made up for that time with the strong personality and big mouth I have now. I’ve been fortunate to have found spaces in community where I am free to be myself, and I recognize that this is a result of a fair amount of therapy, and a good amount of privilege that these spaces exist at all. Before I had children, I was part of a group of friends who were, like me, in committed relationships. As we each started to have children, we found ourselves part of a larger group — young families. There were special events, ‘children’s service’ get-togethers at synagogue, and an email list dedicated to making sure our needs were addressed. When my children entered preschool, day school, summer camp, and even college, there has always been a community that comes along with each transition. Sometimes, the responsibilities that come with belonging feel like a burden and I need to step away and ‘hide’ for a bit to allow my naturally introverted self to replenish. Even in those moments though, I am keenly aware that the choice to appear or disappear is entirely within my own control.

“On the outside, always looking in
Will I ever be more than I’ve always been?
‘Cause I’m tap, tap, tapping on the glass
I’m waving through a window
I try to speak, but nobody can hear
So I wait around for an answer to appear
While I’m watch, watch, watching people pass
I’m waving through a window, oh
Can anybody see, is anybody waving back at me?”

One of my closest friends is a woman a few years younger than I am. On the surface, if one did not look beyond the details of backgrounds, one might wonder how we are friends. I was raised in an Hasidic home in Brooklyn, while she grew up a completely secular Israeli in Israel. She hates cooking, musicals, and awful reality tv, I love all those things. She is straight, single w/o children, and loves her pet cat. I am entirely the opposite including being horribly allergic to cats. Despite all of these differences we’ve been able to maintain a close friendship. My friend has been with me through all major life events for the last 16 years. She has been a steady part of my children’s lives for as long as they can remember, and she has celebrated milestones like the birth of my youngest son, two Bar Mitzvahs (so far), school plays, and graduations. In fact, the first name my youngest said outside of Mama, was hers. She was the one to take me to the emergency room when I had a life threatening infection after surgery, and spent every day sitting in my room for hours — even as I was not conscious enough to be aware of her presence. Over the years, we have spent a lot of time talking about a lot of things, and yet I never realized that she was becoming invisible.

Think about it. How many of our shared spaces and community gatherings make room for single people who are of an age where most are part of a pair? Even our synagogues have not been set up as a welcoming, embracing space for this particular demographic. Synagogues often have groups and events geared for 20’s and 30’s. There is a place for young families, and for those with children in Nursery School and/or Religious School. We arrange to have talks and trips for senior members that range from managing Medicare to the latest exhibit at the local art museum (pre-Covid-19). We all do many things to engage people, to keep them connected to community and each other, but what happens to those that don’t fall into any of these groups? Where does someone belong if they are in their 40s or 50s? Or they are single. Or they don’t have children. Or they are all those things combined. People become invisible, and when we allow this to happen whether by malice or by apathy, the result is the same. When we don’t create space for all people to be seen, we are letting them know that they don’t matter to us, that their needs are not important.

In hindsight, I wish I would have come to this realization on my own without needing my friend to point it out to me, but invisibility is by its very nature, difficult to see. It seems obvious now that it would be hard to be the only single at a table full of couples, or celebrating the accomplishments of other people’s children regardless of how much you love them. I don’t know how to make this better or easier for my friend, and honestly I don’t think that I have that kind of power. I also don’t believe however, that we can continue to exist solely within our own bubbles and keeping those that don’t quite fit in, on the periphery. At the very least, we need to stop shying away from talking about that which makes us uncomfortable.