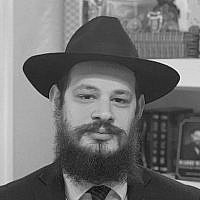 The Blogs
Shlomo Litvin
Apply for a Blog
Please note that the posts on The Blogs are contributed by third parties. The opinions, facts and any media content in them are presented solely by the authors, and neither The Times of Israel nor its partners assume any responsibility for them. Please contact us in case of abuse. In case of abuse,
Report this post.

This past month, as the Hamas terrorist criminal organization launched a war against Israeli citizens, another war broke out online. Flames of antisemitism long ignored by social media companies and the world at large exploded in an inferno of hate, threats of violence, demonization, and targeted harassment.

From vapid models to hateful Congress members, the list seemed endless with even smut workers joining in the hate.

Week-long rooms on Clubhouse, a new social media app, spread Nazi propaganda and demonized Jews, and at the same time, TikTok and Instagram were filled with posts targeting Jews and Judaism.

While many directed their loathing at the Jewish world at large, a great deal of vile attacks were also levied on young individual Jews on Twitter, much of it completely unhinged.

Some tweets were so beyond the pale that they inspired a host of parodies and ridicule as Jewish Twitter sought to cope with the rising tensions and dangerous rhetoric.

One of those tweets couldn’t make me laugh, however. It read, in all Caps: “WHERE THE EXPLETIVE ARE JEWISH LEADERS? WHAT HAVE YOU GOT TO SAY FOR YOURSELVES?”

While many laughed at this tweet, it struck a chord with me. While the intention was hateful and destructive, this antisemite had stumbled on a great question.

Where are the self-described Jewish leaders? Where are the ADL, the AJC, and the Federations? Where is Hillel, the URJ, or the Rabbinical Assembly?

Where are those who claim to speak for the Jewish community?

Sadly, this is not a new question. Many asked this question as Traditional-Orthodox Jews were targeted, assaulted, and beaten across the New York area, and much of the Jewish world intentionally turned a blind eye.

I asked it when at the University of Kentucky, where antisemitism has been rising sharply to near-total silence, both locally from Jewish Studies, Jewish Student Life, and the Jewish Federation, and from national Jewish organizations. In January,  when Chabad joined civic and communal leaders from across Lexington to speak out against Jew-hatred, they stood alone, and when a man was assaulted and hospitalized in a ramming attack at a UK menorah lighting in the heart of Lexington, the silence was deafening.

I asked the question again as I saw the near-total abandonment of young Jews as they face this onslaught of hate online.

Where are the Jewish leaders? What do they have to say for themselves?

This Sunday I was blessed to join a pro-Israel picnic in Central Park, with dozens of young Jews. Each and every one of them has faced targeted harassment, and sometimes death threats online, and many have seen the same in their daily lives.

The event was planned to replace the canceled Israel Day Parade by two young brilliant activists, Sasha Goodman, and Jordyn Tilchen, both of whom are shining lights combating antisemitism, not yet as a career, but simply due to their roles as proud Jews online.

Goodman and Tilchen, working with no funding, planned the event, provided security, and created a space for young Jews to come together to eat, drink, dance, pray, and to live as Jews.

The stories I heard from some of the participants were horrifying, but the unity — the Achdus — felt in that clearing was extraordinary.

The two remarkable young Jewish women are not alone.

When Jewish students at the University of Kentucky experienced antisemitism they relied not only on Chabad, but on Jewish on Campus, another rising Jewish organization run by passionate young Jews. When stunned by the silence by Jewish Studies and Jewish Student Life, it was Jewish on Campus, as well as the Brandeis Center who elevated voices and helped force a response.

When Jews face demonization, exclusion, and threats of violence for their faith or their support for Israel, and have lacked the talking points to express their views, groups like New Zionist Congress have filled the void, providing information, belonging, and pride to many young Jews under siege.

So despite the recent issues, the question of Jewish leadership no longer gives me pause, whether coming from those with good intentions or evil ones.

Where are Jewish leaders? They’re in Central Park on a Sunday afternoon, providing a space and support to young Jews. They’re on Clubhouse, Twitter, and Instagram, standing up for themselves and their people.

Following the Yom Kippur war, an IDF general met with Rabbi Menachem Mendel Schneerson, Lubavitcher Rebbe, my personal mentor and the foremost Jewish leader of the modern era. The Rebbe pointed out a key flaw in the IDF, namely the age of its upper officers. The General admitted the Rebbe was of course correct and spoke of the efforts being made to bring in a significant number of young officers. The Rebbe pointed out with a smile that the vast majority of his “Soldiers” were young men, and credited them with Chabads historic success and reach.

It is time the rest of the Jewish world learned this lesson.

Recently the JCRIF began a highly publicized search for a big idea in which to invest 10 million dollars. While I know that a traditional orthodox organization like my own would never be considered, attention should be paid to these young, passionate, phenomenal voices. The JCRIF and the other “Legacy organizations” should get behind young leaders like Sasha and Jordyn, especially if they want to remain relevant in the future. Any Jewish organization that has chosen to remain silent and thereby abdicated leadership has two options left. Support and Follow, or Get out of the way.

About the Author
Rabbi Shlomo Litvin is an Emissary of the Lubavitcher Rebbe in Lexington, Kentucky. Together with his wife Shoshi and their 5 children, he runs the Chabad of the Bluegrass and the Chabad at the University of Kentucky Jewish Student Center.
Related Topics
Related Posts
Comments