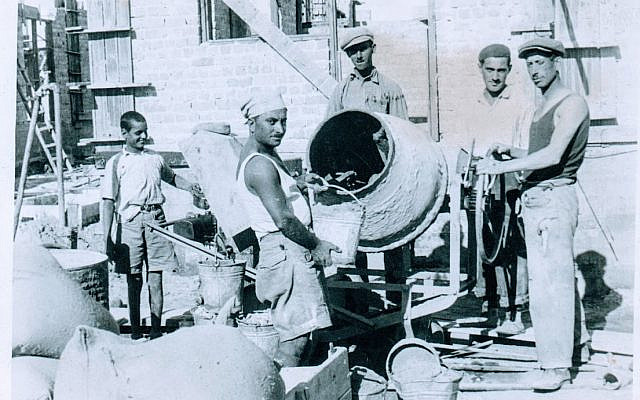 The Trump administration has now again proposed cutting refugee admissions to 15,000 people down from the 110,000. If Trump had been president 100 years ago both my grandfathers would not have been let into America.

My grandfather Ruby Berman, on my father’s side, and his family would most likely have been murdered in the Ukrainian pogroms they were fleeing. And my grandfather Willie Reich, on my mother’s side, would have been stuck in backwater Palestine working as a baker and his brother Bernard as a menial day laborer on a construction site in Tel Aviv (picture: second from the right).

To be clear: Zaidy and his brother Bernard were not being persecuted in Palestine. They simply wanted a better life in America. No one banned them from entering America by saying: “America first! American Jobs are for Americans only! Refugees are criminals!

So Zaidy wants to come to America because he doesn’t like working as a baker and that’s OK. But women from Iraq to Venezuela are turning to prostitution just so they can feed their children and they are denied entry into America for a better life. How is that OK?

Even if a Jew feels its necessary to support Trump because she or he bought into this bullshit that Biden is a communist-socialist trying to destroy America, why not publicly – on her or his Facebook Post – condemn this particular policy of Trump?

How do Jews – whose parents and grandparents were once refugee immigrants to America – remain silent on this issue? Where is their memory? Where are their hearts?