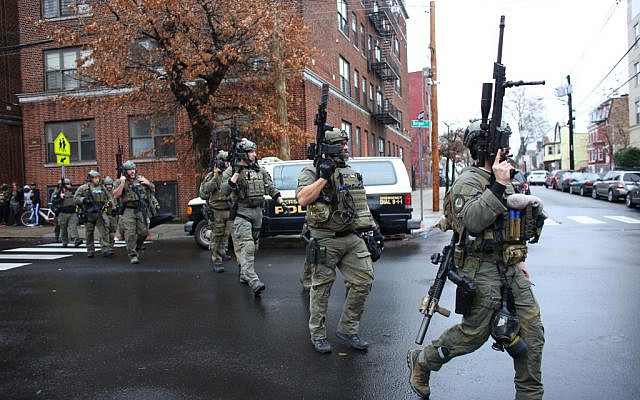 Police officers arrive at the scene of a shooting in Jersey City, New Jersey, on December 10, 2019. (Kena Betancur/AFP)

It started Tuesday with a short text exchange between my husband (H) and myself (M).

H – Are you OK?
M – Yeah, I’m fine. Why?
H – Because I heard there’s a shootout in Jersey City and I never know where you are headed for work, so just checking.
M – Thanks, but I never go to Jersey City – not in the area that I cover. But wow that’s crazy.

At the time, I was busy running carpools, getting dinner together, and preparing for an evening board meeting back at my office. And although Jersey City is close in distance to my home, it isn’t a place I frequent. So in all honesty, I wanted to hear more, but went about what I was doing. Over an hour later, I had a free minute and I flipped on the television, recalling the earlier text exchange, curious to hear if there was any information.

As soon as the screen came on, I froze. There wasn’t much information, but on the bottom of the screen it said, “Shootout at a Kosher supermarket in Jersey City.” And suddenly, all too normal for me lately, it was my world, it was what I do every day in my role as Director of Holocaust Education at Jewish Federation of Greater MetroWest NJ. I use the lessons of the Holocaust and anti-Semitism to hopefully educate for a better future. I grabbed for my phone and my text stream continued.

M – Holy s***! (with an article attached stating the location of the shooting)
H – Wow – what do they know?
M – not much but I might vomit.

And then I cried for myself. I cried because every single day I show up somewhere else in the area, places very much like Jersey City, and educate on what happens when people hate. I show up in religious schools and day schools and public schools throughout the cities and suburbs of this area in New Jersey and push students and teachers to learn about the horrors of the Holocaust, not because I want them to just think about the past, but because I want them to make the change for the future. So I cried because it’s just so depressing to think that this is the world in which we have become accustomed to living.

The text stream with my husband continued as the night went on.
H – it seems now that they think it might be random.
M – yes, that’s what they are saying; I’m not so sure.
H – let me know if you hear anything more.

Our back and forth (with mixed messages from the news) continued and, sadly, by the time we both collapsed into bed that night, the local news was saying that the kosher market was an intentional target. Again, tears dotted my pillowcase as I fell asleep. And when I woke early Wednesday morning to very much the same news, the conversation I had with my husband, in person rather than through text, was truly the most awful I have ever had.

M – The news is still saying the market was a target. I’m sure we will find out that this was an act of anti-Semitism.
H – I’m sure you’re right.
M – I think we should really start thinking about where we should go.
H – There is nowhere to go. Europe? It’s just as bad there. South America is not safe either.
M – We could go to Israel.
H – It’s a hard life there also, but it might be our best option.
M – Australia?
H – It’s so far and we don’t know a single person there.
M – Canada? Panama?
H – maybe…

And I cried again.