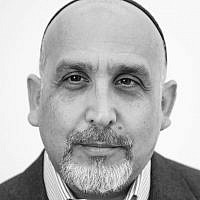 The Blogs
Daniel Jonas
Apply for a Blog
Advertisement
Please note that the posts on The Blogs are contributed by third parties. The opinions, facts and any media content in them are presented solely by the authors, and neither The Times of Israel nor its partners assume any responsibility for them. Please contact us in case of abuse. In case of abuse,
Report this post.

Nahamu exists for a reason. That reason is that unsafe practices and failures of accountability in the Jewish community result in serious harms to a significant number of its members, create a risk to the wider Jewish community and, importantly, may involve breaking the law. Coverage of inadequate teaching and safeguarding in faith schools is one such issue. So are forced marriages, coerced criminality, the covering up of abuse and autonomy. These are the issues we campaign on and for which sunlight is the best disinfectant, however uncomfortable that is for communal leaders.

In order to address these challenges, the haredi community needs brave and imaginative leadership. The Pinter Trust, established in the memory of the late great shtadlan, should be providing such direction. Now is not the time for the continuation of the established, failed approaches, which seek to manage the message with PR, rather than fixing the underlying problems.

The Pinter Trust has also attracted the interest of Eli Spitzer, who is a somewhat quixotic fan of Nahamu. In his fascinating essays on various aspects of haredi life, he tacitly accepts our analysis, consistently concedes that the problems we highlight may well exist, and understands that something should be done to address these clear concerns. Nevertheless, he is resolute in his conclusion: that haredi communities must be left to deal with these matters internally, free from critique from Nahamu or anybody else. Where Nahamu’s concerns coincide with those of Eli Spitzer, he is at pains to distance himself from conclusions which, elsewhere, he largely accepts. It is as if he regards the purpose of Nahamu as being to eliminate the world of Torah True Jews by any means necessary, rather than to ensure the sustainability of the community and to promote the autonomy of its members. To quote a recent article:

To take a pressing [sic] example, Nahamu’s position paper on ‘forced marriage’ in the community is a mess of non-sequiturs, concocted ‘case-studies’, innuendo, and illogic, but it is at present the only thing that relevant decision makers and opinion formers have that meets their standards of evidence.

Eli Spitzer’s situation provides us with an excellent example of Upton Sinclair’s dictum. He is not free to make the criticisms that need to be made. Given the hierarchical structure of haredi communities, to do so would affect his own prospects and that of his children. However, the flaw in Eli Spitzer’s approach is that problems that stem from unaccountable authority cannot be fixed by giving more power to Batei Din, by failing to report crimes to the authorities, or by denying people information and personal freedom. Nor can they be solved by criticizing Nahamu for raising these issues.

Nahamu is not the problem. We are far from alone in identifying the problems that beset parts of the haredi community. It is difficult to argue with the conclusions of the High Court judge who heard the Miriam Kliers trial, a case which involved certain criminal practices relating to the purchase of residential housing. The judge noted that it was “a cause of very great concern” that these arrangements were “common practice amongst respected religious and community leaders.”

The reason Nahamu exists is because those that are being harmed cannot speak out within their communities. They cannot go to the rabbi or the Beth Din. They are funneled into rabbinically-sanctioned organizations that exist largely to create the illusion that something is being done, but cannot actually solve these problems. That is why we are constantly approached by Jewish men and women, living in haredi communities, both directly and indirectly. They speak to us privately online, or come to talk quietly to us at synagogues and simhahs. Sometimes, they are important, well-connected community figures who cannot be publicly seen to be speaking to us. The fact that they feel this way speaks volumes. They cannot rely on Eli Spitzer to believe them, or to tell their stories. Rather they expect to be gaslit, or dismissed as malcontents with an axe to grind. These are not problems that can be sorted out internally. Eli Spitzer must know all this, but he cannot afford publicly to admit it.

We appreciate the position that Eli Spitzer is in and, to some extent, we sympathize. We know that he wants to see change for the better. But it is unhelpful that his own position requires him to bicker with Nahamu. If we want to solve the problems that we know are holding haredi communities back, it is necessary to take the sort of risks that drive real change. Shouting down other campaigners is no way to achieve what should be a mutually desired outcome.

The truth is, the issues that haredi communities are now beginning to address are far from unique. Everything that takes place in haredi communities – worldwide – has already happened elsewhere, in other closed ethnic and religious communities. Nothing is new here. The same cover-ups happen, the same victim-blaming, the same excuses and obfuscation. Just ask Pope Benedict XVI. More to the point, the civil authorities know this too.

Haredim [who have experienced the harms we lobby on] deserve to be heard, not merely represented. Their individual needs should be addressed just as much as their leaders’ communal goals. We are not telling people what their experience is. But neither will we tell them to be silent and to trust the gatekeepers of the system that is letting them down so badly.

About the Author
Daniel Jonas is a well-known figure on the Jewish cultural scene, as both the founder of the critically-acclaimed Sephardic world music group Los Desterrados and the new JudeoArabic ensemble 3yin. He is a trustee of Nahamu, an advocacy and policy charity combating inward-facing extremism in the Jewish community, a Senior Fellow of the think tank Radix, and has a long history of involvement in interfaith dialogue. Daniel has a professional background in consulting, corporate innovation and venturing, with a particular focus on driving technological and organisational change in complex industrial and societal “systems of systems”. He lives in London where he is a member of both Sephardi and Federation communities. All views expressed are personal.
Related Topics
Related Posts
Comments