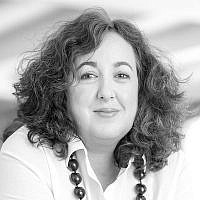 Autumn 2022 means a new semester of widowhood. In the aftermath of my husband’s untimely death from pancreatic cancer, there was pure terror and catastrophic loss, coupled with horrific administrative tasks. A dream house had imploded, a suburban dollhouse had exploded…Now, instead of counting the days and months, I am applying an academic framework to cope with grief.

In the past, September meant a new school year, exciting courses to take, seeking renewal with the High Holidays regardless of whether they arrived early or late, establishing a cultural calendar, deciding what writing projects to pursue, and celebrating my wedding anniversary. Now, as Widowhood Year Three approaches, my life is divided into seasonal (Fall, Winter, Spring, Summer) semesters of learning, growth, and independent study. As my husband’s health mysteriously deteriorated during Spring 2019, this is my “senior year of suffering.” Perhaps, come June, there will be some kind of graduation?

In the past, Autumn meant attending opening night at the Metropolitan Opera. I went with a friend or alone, savoring the last glamorous evening in New York that embraced participation of the general public. Even the people in the cheap seats (like me) wore tuxedos and gowns. Attending was a way of connecting to my past as Lincoln Center was my second childhood home. My parents and I would spend Sunday afternoons at the New York State Theater and I would be presented with the stunning soundtrack of human, particularly female, suffering. After watching “Madame Butterfly”, “La Boheme”, “Lucia di Lammamor”, “Mary, Queens of Scots”, “Carmen”, among others, I finally asked my psychologist mother how she could enjoy these tragic stories. Her reply:

While I claimed to hate the opera (as I had no peers with whom to discuss these stories) I also relished feeling like a grown-up. My parents permitted me to leave our seats in the Fourth Ring Stratosphere and wander freely, trailing my fingertips along the velvet lined railings and staring into the atrium below, where finer folk mingled. They would allow me to purchase a candy bar. But I wasn’t bored. Who could be? There were the accessible “Gilbert & Sullivan” operettas, visits to exotic, faraway destinations, and European History to learn. Why did Mary and Elizabeth fear one another? Why couldn’t these two queens get along? What were the consequences if a widower could not recover from the death of his young wife? What kind of danger could male jealousy pose to an independent minded woman? Would I, like Carmen, draw the “Ace of Spades?”

When it came to the world of opera, women were mostly in distress. Their fates taught me about the dangers I might eventually face – betrayal, infidelity, rape, being valued only for money, youth, or good looks. But, despite all the awful plots, I was secretly proud to be the only first grader I knew who went to the opera, who was taken to see “Mephistopheles” and “Faust”, and confronted the devil himself. Ultimately, opera provided a window into a theology that differed dramatically from my own and compelled me to consider the powerful impact of other cultures.

One opera’s improbable title remained in my consciousness across the decades: “The Merry Widow.” How could such a widow exist? Clearly she was still reasonably young, financially secure, and politically influential. It seemed that her “merriment” stemmed in part from competing males desiring her company and fortune, as opposed to her recovering from the heartbreaking loss of a beloved. That resonant, puzzling phrase made my younger self ponder the future and wonder: What kind of widow might I be? This autumn, I’m experimenting with a new calendar of musical, social, foreign language study, and literary engagement. And I am wondering: What kind of widow am I? Given the complex challenges of this particular Fall semester, what kind of widow might I become?

About the Author
Mindy Ohringer writes politically charged fiction, poetry, and essays. Her work has appeared in "Terror House", "The Thieving Magpie", "Rat's Ass Review", "October Hill Magazine", "The Greenwich Village Literary Review", "New Choices", and "The Columbia Spectator." In September 2018, she was a "Writer in Residence" at Byrdcliffe Arts Colony and will return to Byrdcliffe as a "Writer in Residence" in May 2019, to work on her trilogy about women writers and the 2008 presidential election. In June 2018, she participated in Marge Piercy's annual juried poetry intensive. Mindy earned a B.A. from Barnard College in Political Science and an M.A. in Politics from New York University. Her blog, "Union & Utopia", https://mindyohringer.com, explores how the political and personal intertwine.
Related Topics
Related Posts