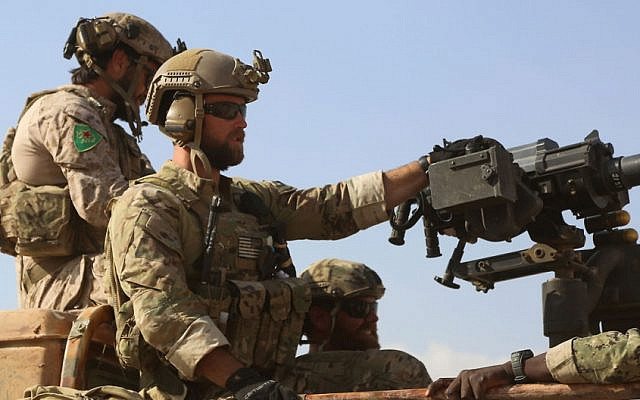 Earlier this week the New York Times published a rather scathing piece against the United States’ military and maybe more to the point former U.S. President Donald Trump’s stance on Terror, accusing the Department of Defense of a massive cover-up operation in relation to the Battle of Baghuz back in 2019 and the alleged war crimes that were committed there to defeat ISIS (Islamic State in Iraq and Syria).

The article reads: “Without warning, an American F-15E attack jet streaked across the drone’s high-definition field of vision and dropped a 500-pound bomb on the crowd, swallowing it in a shuddering blast. As the smoke cleared, a few people stumbled away in search of cover. Then a jet tracking them dropped one 2,000-pound bomb, then another, killing most of the survivors.”

Before I delve any further I’d like to strongly emphasise that regardless of what anyone may feel about former President Trump and his politics, one ought to remember the savagery ISIS militants displayed both in Syria and in Iraq, towards not only their own Muslim ‘brothers’, but those they so keenly refer to as the enemies of God – in other words the Judeo-Christian world.

ISIS is not just another iteration of Islamic radicalism, it is the sovereign expression of an ideology which claims itself omniscient over the Quran and thus its interpretation. Many will argue that more than any other group, ISIS scholars have kept true to the letter of the Book by implementing its injunctions down to a T.

I will quote here the words of Sam Harris, who, in hindsight, makes a valid point as to the nature of the text. “In Islam, it is the “moderate” who is left to split hairs, because the basic thrust of the doctrine is undeniable: convert, subjugate, or kill unbelievers; kill apostates; and conquer the world.”

But I’m not here to discuss theology, rather the recent shift in narrative political commentators and a branch of the media have driven when discussing both the morality and legality of the War on Terror in view of recent findings.

Personally, and having witnessed the horrors of radicalism first-hand – I was in Yemen back in 2011 when the country started to fracture under the weight of warring religious ideologies – Al Qaeda (Sunni Islam) in the South versus the Houthis (Shia Islam) in the North, I would argue that morality is no where to be found in extremism.

The only morality anyone can claim when dealing with Terror is in the act of self-defense.

It is March 2019 and after 10 weeks of a brutal campaign against ISIS stronghold in Baghuz – a town located near the Iraqi border, Washington is on the cusp of a momentous victory. One more push and ISIS would be but History. One more airstrike and the very group which claimed itself a state over Syria and Iraq, the Caliphate as it called itself,  would be no more.

With drones flying over ISIS positions to collect intelligence the DOD decided to greenlight an attack, which, though brutal – several thousand pounds of explosive were released from the air, proved successful in obliterating radicals’ positions, and thus allowing the Syrian Democratic Forces to officially announce complete victory over the Islamists.

But the New York Times now argues that the strike was not legitimate in view of the civilian casualties it claimed. A reality the DOD is vehemently denying as it postulates that those very people – women and children, The Times label as civilians were in fact ISIS combatants and if not that supporters in arms and ideology.

Strong in its position The Times postulates that, “The Baghuz strike was one of the largest civilian casualty incidents of the war against the Islamic State, but it has never been publicly acknowledged by the U.S. military. The details, reported here for the first time, show that the death toll was almost immediately apparent to military officials. A legal officer flagged the strike as a possible war crime that required an investigation. But at nearly every step, the military made moves that concealed the catastrophic strike.”

Which brings me to the only question we ought to ask ourselves – can we keep to the normative definition of what constitutes a civilian in the context of Terror? Allow me rephrase my question: can we argue by virtue of age and gender, innocence?

Maybe more to the point can we afford in our duty of care for our innocent to grant those who value martyrdom more than they do life, the courtesy of our mercy?

I posit that we cannot.

In light of what we know of Terror it is rather evident that, as ​​Jeffrey P. Whitman puts it, “the most appropriate way to understand the just war tradition is from a rule-utilitarian perspective rather than the more usual rights-based, deontological perspective.”

Can we, in all good conscience, hide away from the fact that Terror has enrolled in its doctrine and violence the participation of both women and children, exploding the rules of war in such a fashion that abiding to the old narrative would put our civilian population at mortal risk.

I believe that more than any other country Israel has had to grapple with this reality.

20 years into the War on Terror we would do well to read the writing on the wall. In war, Terror will push the limits of the tolerable far beyond what any of us can envision, let alone imagine. To act against it – Terror that is, requires us to meet radicals where they are, and understand that the violence they profess is not our responsibility to rationalise, nevermind excuse.

Let us not humanise Terror by offering its disciples, whoever they may be, the benefit of the doubt.

Speaking from their place of captivity  in Al Hol camp in Syria,weeks after Baghuz, ISIS women were rather clear in their positions. “Our faith, ideology have been implanted here forever, and America, the Kurds, the infidels, and the Jews will not be able to remove it. This is a belief that has been instilled in our children too, and we will never regret it. We will continue, because the caliphate will return again.”

In his analysis for the Washington Institute, John Saleh clearly warns that our greatest failure against Terror has been to assume the ‘innocence’ of women and by extension, the children in their care.

This is not to say that we should advocate violence towards women and children on the basis of their religious association, only that in the context of Terror, one cannot assume innocence to better cater to our sense of morality.

“ISIS depends on the use of women in the camp as an important weapon within its expansionist ideology. The organization has generally attracted a large number of women and girls from different nationalities, which ISIS recruits for the purpose of disseminating extremist ideas, given women’s and girls’ ability to influence young people. This tactic is particularly relevant in al-Hol, which is filled with children and young people.”

And, “In 2014, ISIS established its first armed women’s battalion under the name of “Al-Khansaa Brigade,” which included one thousand women in its ranks. These women participated in more than 200 terrorist operations, carried out police work within the caliphate, and promoted ISIS ideology in their societies. As evidenced by social media, it is possible that some of these women are inside the al-Hol camp, continuing in their roles to support ISIS.”

What of the children you may say! Well I’m afraid not even they could escape the brutal indoctrination of a belief system that roots itself in bloodshed and intolerance. ISIS has long trained children and teenagers as fighters and in several documented instances had them carry out killings of captives in propaganda videos.

Unfortunately this phenomenon of child soldiers has become endemic in Terror’s circles.

Can we then, in light of the above, accuse the DOD of war crimes? Under whose definition and under which paradigm?

True Washington chose to look the other way … True the military chose to be selective in its dissemination of information … And true women and children were killed in the airstrike.

But how many were saved as a result of it?