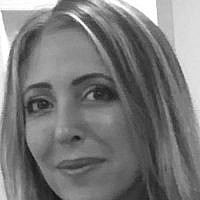 The Blogs
Leah L. Rosen
Apply for a Blog
Please note that the posts on The Blogs are contributed by third parties. The opinions, facts and any media content in them are presented solely by the authors, and neither The Times of Israel nor its partners assume any responsibility for them. Please contact us in case of abuse. In case of abuse,
Report this post.

“Who is wise? One who learns from every person.”

So states Perkei Avot, the classical Rabbinic text. And so I ask myself, what have I learned from every person, and the events of this past week? Probably not what you would think.

Watching hundreds of thousands of people, worldwide, marching and protesting injustice – made me angry. Really angry. And not because of the protests. Angry at our own Jewish community, myself included, because we don’t protest when we are the victims of injustice.

To be clear, I am absolutely not condoning or praising violence, or looting, or any of the horrors of the riots, all of which is devastating and inexcusable.

But as for the peaceful protests – I am in awe of the Black community and its supporters who refuse to be silent in the face of injustice. The impressive solidarity, rallying, and global response is tremendous and powerful enough to have forced every politician to take this issue seriously, and has flooded the media with articles and campaigns in support of the black community. What a powerful voice, what true activism!

And what a shocking contrast to the Jewish community when we suffer from antisemitism! What do we do when we suffer injustice? We cry to each other. We lecture to the choir. We bemoan our fate. We try to have reasonable, intellectual discussions about Israel and the IDF with our detractors. We have a few loud voices but no cohesive movement. So it’s all useless. And then we suffer in silence. Lest we cause any more antisemitic sentiment. Lest we make people hate us more.

When Josef Neumann, 72, was stabbed this past December at a Hanukah party and then died of his wounds, we were silent. Murdered simply because he was a Jew. But no marches against antisemitism for us.

When the 19 yr old young Israeli woman Ori Ansbacher was raped and then murdered by a Palestinian man on February 7, 2019, and there was total media blackout and zero coverage about it, we didn’t rally and demand justice. We didn’t even march for the right for her story to be told. We were silent.

When Gilad Shalit was released from Gaza looking like a skeleton, they celebrated in Israel, but here – we were silent.

When the Fogel family was murdered in their beds, by a Palestinian terrorist, the father, mother, young children all butchered and the newborn baby beheaded, we had no rally, no vigil. In fact, I attended a Jewish mommy-n-me event the next morning and there was no mention of what happened. Only silence.

Imagine what would happen if every time a swastika was spray painted on a synagogue, tens of thousand of Jews and supporters marched through the streets, stopping traffic, causing media reporting.

Imagine what it would have been like if a tidal wave of Jews held massive rallies and candlelight vigils when Joseph Neumann was stabbed, if hundreds of thousands of us sent the message “we will not tolerate this!”

Imagine what would happen if all of us shouted out against the antisemitism in Congress and we absolutely refused to accept the blatant Jew-hatred from Omar, Tlaib, AOC, as well as the pathetically mute response from many of our elected officials.

Why can the Black community around the world unite and make their demands for justice heard and we can’t? What is wrong with us?

We would be wise to learn to rally for ourselves – loudly and unapologetically.

About the Author
Leah is a wife, mother of 8, and attorney living Boca Raton, FL.
Related Topics
Related Posts
Comments