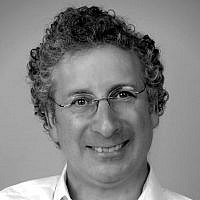 The Blogs
Marc Brettler
Apply for a Blog
Advertisement
Please note that the posts on The Blogs are contributed by third parties. The opinions, facts and any media content in them are presented solely by the authors, and neither The Times of Israel nor its partners assume any responsibility for them. Please contact us in case of abuse. In case of abuse,
Report this post. 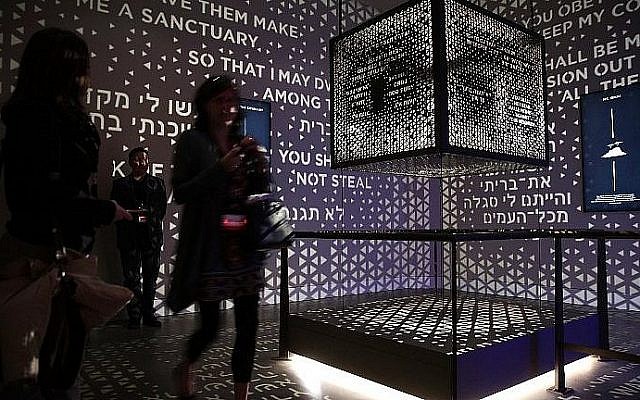 Illustrative: Visitors go through an exhibit on the Old Testament at Museum of the Bible, designed to invite people to engage with the Bible, on November 15, 2017 in Washington, DC. (Alex Wong/Getty Images/AFP)

The American Bible Society, which is best known for translating and distributing Bibles around the world, has purchased the top-level domain, .bible. This is comparable to such names such as .com, .gov, or .edu, as well as newer top-level domain names, such as .law. In this internet age, this purchase is very significant — control of domain names helps the control of, and dissemination of, information. As the ABS notes in its advertisements of the website, dot-bible website names will be short, easy to remember, and highly visible, resulting in a stronger web presence of the Bible according to the ABS.

When it first applied for the rights to .bible, the society pledged to provide wide access to “all qualified parties” interested in Bible issues. Soon after acquiring the domain name, though, ABS barred publication on dot-bible of any material “pointing to any content that may, as determined in ABS’s sole discretion, disparage or blaspheme God, Jesus, the Holy Spirit, Christianity (to include any sects or denominations), the Bible, or any other such tenet, symbol, representative, or principles of the Christian faith,” or “pointing to any content that, as determined in ABS’s sole discretion, espouses or promotes a religious, secular, or other worldview that is antithetical to New Testament principles, including but not limited to the promotion of a non-Christian religion or set of religious beliefs.”

Alarmed by this language, biblical scholars and religious groups began reaching out to the ABS, expressing concerns about its restrictive policies. The efforts have met with some success. Following discussions with the Society of Biblical Literature, the Anti-Defamation League, and the American Jewish Committee, the ABS recently revised its acceptable use policy to invite “a fuller participation for all groups that hold the Bible as their sole sacred text,” though in its advertising for the site, it continues its Christian focus, highlighting that a dot-bible name offers “stronger branding opportunities for your church or ministry.”

As a Bible scholar who is Jewish, I appreciate the society’s recognition that the Bible is central to Judaism as well as Christianity. I worry, though, that while Jews are now welcome at dot-bible alongside mainline Christians, many other groups, such Muslims, Mormons, atheists and skeptics, are excluded.

More broadly, the new ABS policies suggest that the organization still does not grasp the weight of its responsibility as custodian of the top-level domain name .bible. Many consider the Bible to be sacred — but not in the manner in which the ABS would define this term. The Bible is also central to others who do not hold the Bible to be sacred at all, and do not see the Bible as God’s revelation. All of these groups deserve access to .dot-bible domain names.

Furthermore, the society’s language shows deep unfamiliarity with the history of how the Jewish and Christian traditions have changed and developed over time. For example, some branches of Christianity and Judaism prohibit women leading congregations, while others embrace women in the pulpit. Would a website praising women as church leaders be deemed by ABS to disrespect the Christian (or Jewish) faith? And would it thus be banned from dot-bible? Before determining the correct, orthodox, opinion on this or a host of other topics, the society might consider the dictum, especially relevant during the 500th anniversary of the Reformation, that “the heresy of today will be the orthodoxy of tomorrow.”

The ABS guidelines raise another issue: who will decide what positions correctly represent Judaism or orthodox Christianity? ABS policies say that disputes about whether an item can be included in dot-bible are settled by panelists who must affirm the traditional Protestant definition of the Bible, must “enthusiastically support the mission of the American Bible Society,” and must “believe that the Bible is the Word of God which brings salvation through Christ.” These stipulations are especially problematic. Can such a group fairly and impartially determine what belongs within the .Bible domain? For instance, how could such a group, consisting entirely of professing Christians, adjudicate whether or not a website or article disrespects Jewish faith?

The current mission of the ABS also raises concerns about its suitability as custodian for dot-bible. Prior to 2001, the society’s primary purpose of distributing Bibles was “undertaken without doctrinal note or comment.” The group’s orientation shifted significantly at the beginning of the millennium. Now, the society’s website, American.Bible, describes the group’s advocacy campaign on behalf of the Bible as understood through a particular Protestant lens. For example, the site describes the dot-bible domain this way: “By winsomely championing the power of God’s Word through a variety of media, including the digital space provided through the new .Bible domain, God’s word will gain cultural credibility.” The site also describes the “life-changing message of God’s word” and “experience[ing] the love of Christ in the pages of Scripture today.”

I appreciate the honesty of these deeply held beliefs. Yet many who study the Bible would disagree that the Bible is the word of God and expresses the love of Christ. More broadly, the ABS seems not to understand that there is no consensus among Protestants, Roman Catholics, Eastern Catholics and Jews on what constitutes the Bible, nor is there is a single model among these groups and others for the Bible’s origin, authority, and interpretation.

It would be wrong for a single law firm or a small group of ideologically driven firms to control the new generic top-level domain name .law. It is far more wrong for dot-bible to be controlled by any group interested in promoting a single notion of what the Bible is and how it should be studied and interpreted.

The American Bible Society should again revisit and further broaden its acceptable use policy for dot-bible, fulfilling the purpose of its original application, “provid[ing] world-wide access to all qualified parties interested in disseminating or seeking information (whether non-commercially or commercially) about Bible issues, news, culture, lifestyle, entertainment or any other topic with a convenient and recognizable domain name that affirmatively associates them and/or their information with the Bible.”

If the society cannot greatly expand its vision for .Bible, then the Internet Corporation for Assigned Names and Numbers, which manages global domain names, must revoke the American Bible Society’s sole control over that name. The Bible has never belonged to one group alone. Its internet namesake shouldn’t either. Instead, this key internet portal to Bible discussion, debate and scholarship should be open and available to all — just as the book itself always has been.

Marc Zvi Brettler is Bernice and Morton Lerner Professor of Jewish Studies in the Department of Religious Studies at Duke University, and the Dora Golding Professor of Biblical Studies emeritus at Brandeis University. He is author of many books and articles, co-editor of The Jewish Study Bible and The Jewish Annotated New Testament, and co-founder of TheTorah.com.

About the Author
Marc Zvi Brettler is Bernice and Morton Lerner Professor of Jewish Studies in the Department of Religious Studies at Duke University, and the Dora Golding Professor of Biblical Studies emeritus at Brandeis University. He is author of many books and articles, co-editor of The Jewish Study Bible and The Jewish Annotated New Testament, and co-founder of TheTorah.com.
Related Topics
Related Posts
Marc Brettler
Comments