The Blogs
James R. Russell
Apply for a Blog
Please note that the posts on The Blogs are contributed by third parties. The opinions, facts and any media content in them are presented solely by the authors, and neither The Times of Israel nor its partners assume any responsibility for them. Please contact us in case of abuse. In case of abuse,
Report this post. 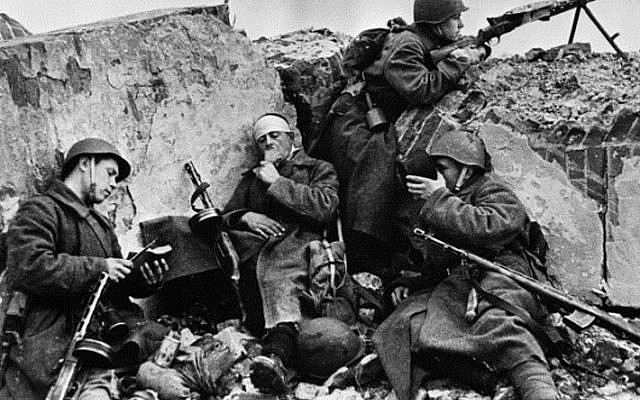 Jean Améry in his philosophical memoir of Auschwitz, At the Mind’s Limits, writes in his chapter on torture of the specious equation of Hitler and Stalin, of Nazi Germany and the Soviet Union, that was introduced soon after the war into Western Cold War propaganda: “allow me to repeat here in my own name and at the risk of being denounced what Thomas Mann once said in a much attacked interview: namely, that no matter how terrible Communism may at times appear, it still symbolizes an idea of man, whereas Hitler-Fascism was not an idea at all, but depravity.”

As a corollary of the specious equation is the present untruth, parroted by American diplomats and many others, that Hitler and Stalin are the culprits who together began World War II itself. This is the pretext for excluding Russia from commemorative ceremonies; and Putin has, unsurprisingly and justifiably, reacted with anger.

Here are the facts. When Hitler came to power in 1933, his declared aim was to save what he called white, European civilization from two enemies: the Jews and the Bolsheviks. After the Russian Revolution, Churchill said “This baby must be strangled in its cradle.” Western powers including the United States invaded Soviet Russia. Americans can fantasize all they like about a Russian attack in scary movies like “Red Dawn”. But they have never once invaded us. We invaded them.

The West threw a cordon sanitaire around the young Soviet Union, and many hoped Hitler might be used to help strangle the Red teenager (the baby having inconveniently survived). So the democracies sat on their hands as Hitler rearmed, occupied the Rhineland, the Sudetenland, Austria, the rest of Czechoslovakia. (Poland, for a while an ally of Hitler with a fascist dictator and anti-Semitic laws, joined in the invasion of Czechoslovakia in 1938. This is the point Putin is making, I think.) Britain and France even ensured that the Czechs did not raise a finger to defend themselves, or ask the USSR (with whom they had a mutual defense pact) to help them.

Throughout all this, the years building up to the outbreak of the war, the USSR had been begging the West to join an alliance with it for mutual security against the Nazis. But Washington, Paris, and London turned a deaf ear, a blind eye, and a bald head to the proposal. When the fascist Franco sought to overthrow the Spanish Republic, Hitler and Mussolini poured arms into his revolt. The Catholic Church supported him. So did Standard Oil of New Jersey: the “noninterventionist” democracies were interested in nonintervention only to keep volunteers from fighting for the republic in Spain. Who intervened to fight for Spain? A lot of Jews, and also African Americans, antifascist Germans, Frenchmen, Chinese, Mexicans. Young men from my Dad’s Brooklyn neighborhood joined the Lincoln Battalion: some never came home, others who did were blacklisted as “premature antifascists”. Such weapons as the outgunned warriors of the International Brigades had were Soviet rifles— the good old трехлинейка— and the occasional Russian fighter plane. If Spain had not fallen, Hitler might have been stopped right there. There would not have been a war. But Spain fell.

In 1937-38, Stalin’s paranoid terror swept away the best and the brightest of the nation and decimated the Red Army, which till then had been strong enough to repel any aggressor. In 1939, Stalin signed a nonaggression pact with Hitler, and many American comrades quit the Communist Party in despair. Others tried their best to accept that the pact was a tactic to gain time and strategic depth, at a time when the USSR was at a disadvantage (albeit one of its own making). When the war did begin, with Germany’s invasion of Poland on 1 September 1939 (the Soviets moved into eastern Poland only several weeks later), Britain and France declared war on Germany, but otherwise did nothing at all. During the Battle of Britain, fleeing Polish and Czech pilots helped the Royal Air Force to save the island from invasion. The UK showed its gratitude by deporting most of them at the end of the war.

On June 22, 1941, the Nazis and their Finnish, Romanian, Italian, and other allies invaded the Soviet Union. Churchill, the lifelong anti-Communist, declared his support for the Russians, quipping memorably that if Hitler invaded hell, he as Prime Minister would be certain to make favorable mention of the devil in the House of Commons.

What did the Germans do in the USSR? I think readers of The Times of Israel know about the Einsatzgruppen and the “holocaust of bullets” on Soviet territory, the deliberate starving to death of hundreds of thousands of Soviet POWs, the 900-day-long Blockade of Leningrad that killed nearly half the population of Russia’s second-largest city, the desperate defense of Stalingrad that turned the tide. Perhaps you also know that the USA sacrificed 400,000 soldiers and sailors in the war, and that except for the attack on Pearl Harbor the war never touched American territory. Between 20 and 30 MILLION Soviet citizens died in World War II, most of them on their own soil. They were soldiers and civilians, men, women, and children. They were Russians, Jews, Belorussians, Georgians, Armenians, Uzbeks, Kazakhs, Yakuts, and many more.

Ukrainians, too. When I was 15, I was walking back to our school group’s hotel in Kiev from the cinema on a warm summer night. An older man on a bench on the city’s main street, the Kreshchatik, asked me to sit with him. He never slept, he said. He was a French horn player, he said. In the war, he said, a corpse was dangling from the branches of every tree on the Kreshchatik. He ran out into the countryside, he said. His parents were gone. The Germans were herding people into barns and setting them on fire. He never slept after that. I’ll sit with you, I said. We sat together.

Another evening I got on a trolley and asked the way to Babi Yar. After a shocked silence a woman said she would take me. Aren’t you a Ukrainian? I said to her as we stared at the nothingness of the place. Aren’t the victims here Jews? I was angry. She was a schoolteacher, and in the Soviet Union, in those bygone days, that was a sacred calling, it was like being a parent. Yes, I’m Ukrainian, she explained gently; and my brother is down there. The Nazis killed him because he was a Communist.

In Leningrad, I detached myself from our group and wandered the streets, finally joining a cheerful band of boys my age who were petting a courtyard cat, sampling a bottle of Georgian wine, and taking turns riding a noisy motorcycle down the block. Several were war orphans. At some point that evening, we were where one of the orphans was living, a building with bomb damage from the war. They offered me a very large glass of vodka, and a tomato. Later on, we went to the Neva to watch the bridges rise.

Our school-group leader from the States told us at some point that summer after a few drinks that when we got home a certain government agency would present to him a list of our names and ask him to tick off those who were Pinkos. Screw that, I said to him. Mark me down as a Red. Who knows, maybe he remembered to.

Many years have passed. I thought the Cold War was behind us. I thought Nazism and anti-Semitism had been defeated. But it is not so, and here we are in this horrible brave new world of triumphant, universal gangster capitalism, of reconstituted medieval bigotry and lies, of established religions restored to their old role as purveyors of hatred or arms of police power, of an alienation of labor so profound that it would have shocked Marx to silence, of a gulf between rich and poor so vast that it beggars the darkest dystopian fantasies of science fiction. There is no more Soviet Union. “Ballad of a Soldier” and “Belorussian Station” are for many movies about remote ancestors in another world. The hammer and sickle, a quixotic symbol signifying the ownership by industrial workers and farmers of their factories and lands, is a rusting emblem on flea market items laid out on the curb in Tbilisi or St. Petersburg.

So it is easy to repeat the big lie, even when the old ideological adversary is no more. Russia, the country that bore the brunt of the war, started it. Ooh, scary Mishka the big bad bear! Sure it did. war is peace, freedom is slavery, ignorance is strength. And I have a bridge here to sell you, how much money you got on you?…

The true answer to the question, Who started World War II? is easy: Hitler did. But the real question to ask is, Who fought the hardest, sacrificed the most, and won World War II? That’s easy to answer, too: the peoples of the Union of Soviet Socialist Republics and their Red Army. Whom I love, and to whom I will remain grateful as long as I live. But then, like I said, mark me down as a Red.

About the Author
James R. Russell is Mashtots Professor of Armenian Studies at Harvard University (semi-retired), Distinguished Visiting Professor of the Hebrew University of Jerusalem, and a part-time Lecturer in Jewish Studies and Biblical Hebrew at California State University, Fresno. He is on the Editorial Board of the journal Judaica Petropolitana, St. Petersburg State University, and a founding member of the International Association for Jewish Studies, chartered in the Russian Federation. His PhD is in Zoroastrian Studies, from the School of Oriental Studies of the University of London; and he taught Ancient Iranian languages and religions at Columbia University from 1982-1992.
Related Topics
Related Posts
Comments