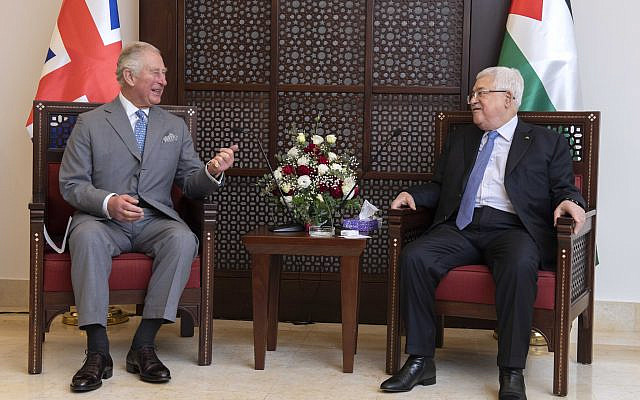 If you caught either of my earlier blogs, you will know that I have – to use a somewhat past-its-sell-by-date cliché – a “bee in my bonnet.” Or, in plain English, I have an obsession.

That obsession is to inform/educate about who is genuinely to blame for the Palestinian people’s plight. And based on the inferences in those carefully crafted phrases delivered by HRH Prince of Wales speaking in Bethlehem last week, education is urgently needed.

My earlier blogs are built on historical facts rather than Arab and Palestinian propaganda (or even Jewish propaganda), and both make it very clear who is really responsible for the tragic plight of the Palestinians. And not only who was originally responsible, but who exploited their plight for political and PR advantage. Oh yes, and who continues to exploit it, though too few people (and rarely anyone on the Left) calls them out on it.

Sadly, ignorance of the historical facts leads many people, including HRH Prince of Wales – and, regrettably, some Jews – to believe that Israel is mainly (or even entirely) to blame for the Palestinian tragedy. That is particularly true for some younger Jews, especially those who have never learned the historical facts and/or those who read The Guardian.

And it is true for some Progressive Jews, too, because many Reform and Liberal Jews (including some rabbis) were sucked into believing the fake Palestinian narrative when the Progressive movement was becoming iconoclastic and adopting an array of ‘radical’ causes.

They were doing so in part to offer a fresh perspective on key issues and in part to carve out a separate identity from mainstream Orthodox Judaism. (Ironically, by moving away from mainstream Orthodox Jews on Israel-Palestine they moved closer to strictly Orthodox Jews because back then many Charedi sects were opposed to Israel’s existence. Some even chose to line up with the Arabs, as some hard-left Jews currently line up with those opposed to Israel’s right to exist). This drift towards acceptance of the fake narrative was vigorously resisted by the heroic head of Progressive Judaism, the late Rabbi Sidney Brichto.

He persistently and courageously fought against the tide of lies, calumnies and libels about Israel’s culpability but he couldn’t entirely stop them taking root.

Some Jews who have been persuaded by this fake narrative stay silent either from “tribal” loyalty or perhaps out of a desire to avoid rows during family Friday-night dinners. Other Jews become vocal opponents of Israel believing, somewhat self-righteously, that they are in possession of the “truth” and must speak out.

As I said in an earlier blog, this particularly applies to many of those connected with JFJFP (Jews For Justice For Palestinians).

While I share the empathy and compassion of JFJFP members (and HRH the Prince of Wales) for the Palestinian people, I totally reject the premise of JFJFP because neither Israel nor Jews are responsible for the tragedy of the Palestinians.

Based, therefore, on who actually created the Palestinian refugee crisis (by rejecting several well-documented, pre-1948 offers of a Palestinian state) and on how the Arab nations have consistently exploited the Palestinian people for political and PR purposes, it would be more fitting if the Palestinians sought justice from the Arab nations. Thus JFJFP should immediately rebrand as JFJFP-FAN (Jews For Justice For Palestinians From Arab Nations). Or perhaps Jews should disassociate altogether and it could become JFP-FAN (Justice For Palestinians From Arab Nations). That way, it would not only more accurately reflect the real history of the region but could appeal to all those who claim their criticism of Israel is “not anti-Semitic” but merely reflects their concern for Palestinians.

Another option is JFP-FUN (Justice For Palestinians From the United Nations) to reflect the role of the United Nations Relief and Works Agency (UNRWA) in the Palestinian Refugee Crisis. Having come into existence to aid the Palestinians, the Palestinians became UNRWA’s raison d’etre, which could (to a cynical person) suggest they had a vested interest in maintaining the status quo as “refugees” of hundreds of thousands of people. Either way, the UN (or its agency) is at least, partly culpable, so the creation of JFP-FUN could address that particular injustice…