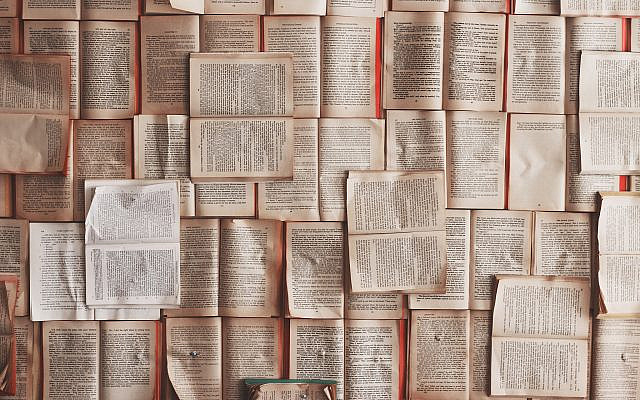 Photo by Patrick Tomasso on Unsplash

Which Israeli writers did I depend on this year? Who offered fresh thinking and sharp analysis on Israel from Israel? Whose evocative descriptions gave me a taste of Israel on the days I missed it most?

Most of all, which writers were an invaluable help in my work of telling Israel’s story here in Minnesota? Each of the gifted writers listed below.

As 2019 comes to a close, I want to recognize and thank these five women and seven men who were my teachers this year.

Micah Goodman: His must-read book, Catch-67: the Left, the Right, and the Legacy of the Six-Day War, analyzes Israel’s long internal struggle over what to do with the land acquired in this defensive war. He explains the core beliefs that have shaped thinking on the Israeli left and right, and the paradox that results when each side is correct in the truth it affirms and wrong in what it ignores. Goodman is a pragmatist. In his view, the Israeli-Palestinian conflict cannot be solved in the near term, but steps can be taken to shrink it. He outlines them here.

Shira Pasternak Be’eri:  In 2017, after a terrorist plowed his truck into a group of Israeli soldiers on an educational tour of the Haas Promenade (the ‘Tayelet’), killing four of them, Shira pledged that she and her husband would stroll the promenade regularly, that terror would not keep them from this site of unsurpassing beauty. She invited others to join them. Later that year, my husband and I met them on the Tayelet for a Shabbat walk. Shira became a dear friend and someone whose work I eagerly read. This year several of her essays focused on her beloved father, Velvel Pasternak, who passed away in June.  As Shira recites Kaddish daily for him, Tenth for a Minyan captures her commitment to Orthodox Jewish law alongside her frustration at the inequality of some of its practices.

Daniel Gordis:  Thank goodness, someone was brave enough to tackle the elephant in the room. Gordis’s new book, We Stand Divided; the Rift Between American Jews and Israel, explains how the relationships between the two largest Jewish communities became so fraught. The roots of the discord lie not in current politics, but in the formation of each community under very different conditions. That led to Israeli Jews and American Jews embracing different visions of Jewish identity, Jewish life, and the Jewish future. Gordis’s provocative book should get Jews on both sides of this divide talking…and thinking about what we can do to sustain ourselves as Am Echad, one people.

Adele Raemer: A mother and grandmother living on a kibbutz at the Gaza border since 1975, Adele manages an astonishing juggle. Her writings balance her fierce love for her community, her outrage over the rockets and other forms of terror Hamas sends across the border, and her empathy for Gaza’s civilians, themselves Hamas victims. Hello to the Other Side is her account of a Zoom meeting of Israelis and Gazans she recently organized.  Last week she testified before the UN Security Council about life on the Gaza border. You will find that testimony on the Facebook page she moderates, ‘Life on the Border‘.  And–this remarkable woman also volunteers as a trained medical clown, bringing cheer to children in the pediatric ward at the hospital in Ashkelon.

David Horovitz: Throughout these unprecedented rounds of Israeli elections, The Times of Israel’s founding editor has been a reliable source of information and insight. A look at his 2019 archive chronicles the labyrinth of Israel’s electoral process, its players and intrigues. His recent article, Why Israel’s Third Elections Might Not Be Such a Disaster After All, is worth reading to understand why this veteran journalist strikes a note of optimism.

Sarah Tuttle-Singer: On days when I’m aching for the sights, sounds, and scents of Jerusalem- which is most every day- Sarah brings me along as she strolls Jerusalems’s narrow alleys and ascends to its rooftops. Sarah has a compelling voice because she possesses the essential first attribute of a writer — the ability to see. Sarah sees Jerusalem’s people and places in all their beauty and complexity, and she does not avert her eyes when she sees something wretched. Her writing both inspires and disturbs. Sarah is also wickedly funny! My favorite piece from 2019 was this hilarious account of Sarah ‘standing her ground’ at an Israeli bus station, a spot-on snapshot of an everyday moment in Israel.

Matti Friedman: The most gripping book I read this year — with no close second — is Friedman’s deeply researched account of the Arab Section of the Palmach. His enthralling Spies of No Country: Secret Lives at the Birth of Israel recounts the stories of four young men recruited to be agents in the lead-up to Israel’s 1948 War of Independence. As Jews from Arab lands, they could convincingly assume Arab identities, infiltrate Arab society, and gather much needed intelligence. Suspenseful and illuminating, the book is an examination of complex identities- those of the spies and that of Israel today.

Vivian Bercovici: Canada’s former ambassador to Israel (2014-16) has remained in Tel Aviv where she offers astute analysis on Israel’s political scene. Writing for Canada’s National Post and for Commentary, Bercovici is deft at untangling complicated issues for North American audiences. Before I can make Israel’s confusing and often bewildering politics understandable to others, I have to understand them myself. Her writing is a great help.

Gil Troy: Would you like to organize a small group conversation around Israel that goes beyond the narrow confines of politics? A conversation grounded in a selection of texts from a range of Zionist thinkers? Gil Troy’s Zionist Salons are what you’ve been looking for. The Zionist Salons are a set of ready-to-use plans for leading such a conversation–I’ve used them and they really work. The Salons are an outgrowth of Troy’s The Zionist Ideas, a much expanded version of the Arthur Hertzberg classic. As well, Troy is a columnist (Center Field)  for the Jerusalem Post, writing with intellectual depth and eminent common sense.

Adeena Sussman: Sussman’s highly acclaimed cookbook, Sababa: Fresh, Sunny Flavors From My Israeli Kitchen, deserves every bit of the enormous praise it has received. It’s one of those cookbooks that’s joy both to use and to read. Sussman takes readers to the bustling stalls of Shuk HaCarmel, the market where she buys the produce, spices, meats, fish, cheeses, and all manner of ingredients that she will transform into her signature dishes. Along the way you will meet some of the shuk’s lively vendors. The photography is a tonic for winter-weary eyes; her sumac and za’atar chicken does the same for the palate and soul.

Dan Shapiro:  Some writers excel on Twitter; Shapiro, the former US Ambassador to Israel (2011-2017) is one of them.  Here, in a 20-tweet thread, he clearly explains how US aid to Israel works.  What does he think will happen to the US embassy in Jerusalem if a Democrat is elected president? Here is his what he foresees. Shapiro’s tweets have been a much needed voice of sanity between the overheated far left and far right.

Yossi Klein Halevi: When I speak to high school classes, Halevi’s Letters to My Palestinian Neighbor is the book I implore every student to read. The slim volume is a series of ten letters Halevi has penned to an imaginary Palestinian neighbor on the other side of the security barrier that divides the landscape between Halevi’s Jerusalem neighborhood and the Palestinian village of Anata. It includes some fifty pages of letters from Palestinians and Arabs he’s received in response. Halevi’s telling of the Jewish narrative, coupled with the Palestinian narratives in the letters he receives, is exactly the kind of nuanced material….everyone should read. Halevi is also a prolific columnist. This, about how the Israeli musical and spiritual scene is being transformed by the revival of prayer poems (piyyutim) was one of my favorites.

Who were your go-to Israeli writers this year? Who did you turn to for information and inspiration? I invite you to use the comment thread below to share!