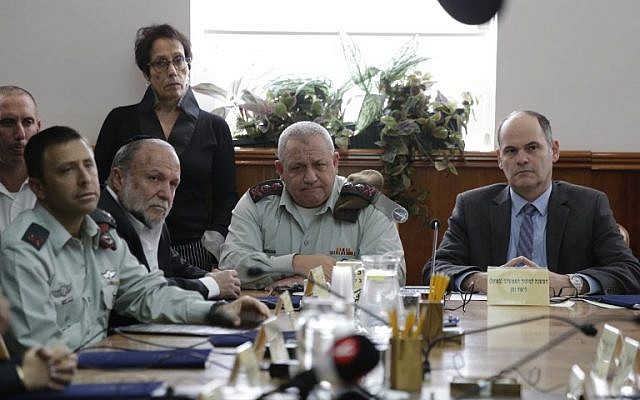 The 2019 elections in Israel, focused so totally on the immediate political fate of Benjamin Netanyahu, may not be the most important in the country’s history. They are, undoubtedly, among the most fascinating. Rarely has an election season been so fraught with passion and so rife with uncertainty: the lineup of contestants is still unknown, the party map is blurred, the substantive issues are vague, and emotions are running unusually high. Also, in very few instances in the past, has it been so unclear who is actually running the show during the sensitive period between agreement on new elections and the formation of a new government in their aftermath.

The Basic Law: The government, as amended in 2001, states unequivocally that should the Knesset disperse itself (as opposed to a situation in which the incumbent prime minister resigns or is incapacitated), the government will continue to function on a regular basis with full authority until the day of the elections, when it becomes a transitional body with highly limited powers until a new coalition is formed. Implicit in this arrangement is the idea that the outgoing government will “act with restraint,” since the institutional checks and balances exercised by the Knesset are inoperable. During these months, the daily affairs of state are meant to be handled mostly by the administrative branch in a manner akin to autopilot.

This year, however, the ranks of the senior bureaucracy are especially thin. Some key officeholders have only recently assumed their positions and are still learning the basics of their jobs; others hold temporary appointments pending the selection of permanent officeholders; and still other slots remain empty, waiting to be filled at some future time. Ironically, more power is concentrated in the hands of the prime minister and his coalition partners today than at any previous time during the past four years. Their impact during this lame-duck hiatus may extend far beyond their limited tenure.

Who, then, is in charge during these tumultuous days and what interests are they promoting? Three major state institutions are headed by fresh appointees. The new Civil Service commissioner, Professor Daniel Hershkowitz, just assumed responsibility for the sprawling governmental bureaucracy a few months ago. A personal appointee of Prime Minister Netanyahu, this former professor at the Technion, Member of Knesset, Minister of Science and Technology for the now defunct National Religious Party, and the recently retired president of Bar-Ilan University comes to this central position with little widescale administrative experience. He has already exhibited his loyalty to the powers that be by supporting the candidacy of Moshe Edri for the position of police commissioner — an appointment eventually scuttled by the Goldberg committee of which he is a member. He also instigated an inquiry into the Wexner Foundation fellowships (designed to besmirch Ehud Barak), despite the fact that such a probe is beyond his authority. And, most recently, he has refused to approve pivotal appointments within the Ministry of Finance.

Professor Amir Yaron, the incoming governor of the Bank of Israel, barely started his new post a few weeks ago. He takes over this highly sensitive regulatory position after a long period of work abroad, far from the fluctuations of the local market. However qualified professionally, it will still take him some time to familiarize himself with the intricacies of the Israeli economy and to get to know its key actors. In the interim, he will likely be reluctant to fully exercise the regulatory powers at his disposal.

Today, Moday, Major-General Aviv Kochavi is being sworn in as the new chief of staff of the Israel Defense Forces, replacing Gadi Eizenkot. By all accounts an exceptionally gifted officer, Kochavi will nevertheless need a minimal amount of time to adjust to the new office and to his now direct superior, Prime Minister and newly-minted Minister of Defense Benjamin Netanyahu (who has made it known that Kochavi was not his first choice for the post). Under normal circumstances such transitions are complicated; in the turmoil of the present security and political situation, they are bound to be even more fraught with difficulty.

While these new critical executives will be wetting their feet, the central law enforcement agency, the police, will be headed by a temporary inspector general, Major General Motti Cohen. In the absence of an agreed-upon candidate for the position, this interim officeholder has yet to garner the legitimacy and authority accorded to a permanent appointee.

At the same time, the government has not seen fit to fill certain outstanding positions. The example of the foot-dragging in key posts in the Ministry of Finance is a case in point. So, too, is the failure to approve the nominees for the Public Council of the Second Television and Radio Authority, charged with licensing and oversight of all commercial media outlets in the country. The current council members — now totally beholden to the present government — will probably remain in office until well after the elections.

The palpable fragility of key government institutions is reinforced by shifts in the composition of the government. Two fresh appointees: Yoav Galant, as minister of Immigrant Absorption, and Yifat Shasha-Biton, as minister of Construction and Housing, are only now taking their first steps in the government, just as Mr. Netanyahu is becoming accustomed to acting simultaneously as prime minister, defense minister, minister of Health and, at least for the time being, also as foreign minister. These moves further enhance the decidedly centralized structure of power in the latter days of the present government.

What do these cumulative acts of commission and omission mean? In the first place, they reinforce the already tangible problems of governance that have plagued the outgoing — but still ruling — coalition. With the centralization of power compounded by its marked politicization in the midst of an election campaign, and with the checks and balance inherent to the system palpably weakened, the centrality of Benjamin Netanyahu cannot but be magnified. This is especially true given that the three decidedly stable institutions — the presidency, the court system and the Attorney General’s Office — are under constant attack by the prime minister and his cohorts. The budding neo-authoritarianism of the past few years is becoming increasingly personalized and entrenched.

Secondly, for the vast majority of citizens, key aspects of their lives will be guided even more by the political interests of those currently at the helm. This will be felt today and down the line in the economic sphere, as growing deficits are approved and economic stability may be compromised. Physical security, already at a nadir, will persist as priorities in law enforcement may be subjected to particular interests (vide capitulation to the backlash to the treatment of suspected Jewish terrorists and the endorsement of new settlement roads and construction). The demands of the ultra-Orthodox may hold even more sway — mostly at the expense of women and minorities — as their role in any future government formation becomes even more central. And, more alarmingly, in desperation military operations may be instituted to promote personal goals.

Third, it is still possible that the more whimsical the acts of the government during this period, the more subject they will be to a backlash. While some Israelis today are filtering out election-speak and others are totally withdrawing from the public sphere, as time progresses many are beginning to question the tone and substance of the loyalists who have taken over the airwaves and the social media. They are seeking a semblance of normality that does not fit into stereotyped renditions of left and right purveyed by ruling groups. They may yet become the gamechangers of these elections, upturning the potentially abundant political benefits accruing to those running the government during this electoral season.

Whatever the immediate outcome of these processes, their long-term implications are significant. Barring an opposition victory, these elections will be nothing more than a holding operation until the legal steps involving Netanyahu are exhausted. The undermining of the institutions and norms of governance taking place now does not bode well for the post-election period. To prevent further democratic slippage, the most powerful watchdog of all — the public — has to be particularly vigilant at this time in overseeing those who are currently minding the store.