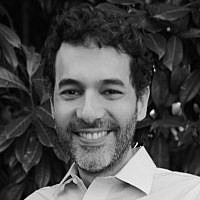 The Blogs
Jorge Ale-Chilet
Apply for a Blog
Advertisement
Please note that the posts on The Blogs are contributed by third parties. The opinions, facts and any media content in them are presented solely by the authors, and neither The Times of Israel nor its partners assume any responsibility for them. Please contact us in case of abuse. In case of abuse,
Report this post.

The European Commission (EC) recently announced that German automakers BMW, Daimler, and Volkswagen (which also manufactures Audi, Porsche, and SEAT) settled to pay a total fine of 875 million euros for breaching antitrust rules by colluding on technical development in emissions cleaning. Daimler was not fined, as it revealed the existence of the cartel to the Commission. This case is the first one where the EC fined a group of firms for colluding on a technology, rather than prices. The specific technology in question was nitrogen oxide (NOx) control systems in the companies’ diesel engine vehicles from 2007 to 2018.

The inquiry into possible collusion began in September 2018. That same month, three colleagues and I began studying the causes and effects of the collusion case. The result is a study released on April 5 as a working paper of the Toulouse School of Economics and a research discussion paper for the Centre for Economic Policy Research, titled “Colluding Against Environmental Regulation.”

The paper, co-authored with Cuicui Chen of the State University of New York at Albany, Jing Li of MIT Sloan School of Management, and Mathias Reynaert of the University of Toulouse in France, looked at a technology called Selective Catalytic Reduction (SCR), which requires a large quantity of Diesel Exhaust Fluid (DEF) to neutralize NOx emissions to comply with EU standards. The companies colluded to reduce the size of the DEF tanks, which resulted in more NOx pollution — and possibly more deaths.

“When we hear about collusion, we usually imagine companies that coordinate illegally to maintain high prices. In doing so, companies are making profits at the expense of consumers. Here, and for the first time, the European Commission concluded that technological choices can also be a reason for collusion,” my colleague Mathias Reynaert wrote in an opinion piece.

My colleagues and I investigated how this collusion could aid the companies’ profits. We found that large DEF tanks reduce firms’ profits because tanks encroach on car trunks and increase marginal production costs. The automakers gained about 0.68—2.83 billion euros in variable profits from the collusion. Also, in contrast to other cases of collusion, the cartel aided the welfare of car buyers, who tend to value more the additional trunk space than the extra pollution.

Those benefits to automakers and car buyers, however, come at the cost of grave NOx damages. Collusion in this market damaged public health, which is an externality not usually considered in antitrust cases. In effect, we computed a more general measure of benefits than just profits to take into account the environmental effects of the non-compliant abatement technology. Our results imply that the combined antitrust and environmental penalties would have to reach between 1.46 to 14.63 billion euros depending on the stringency of pollution standards to remedy the welfare damages of the alleged collusion.

My group’s study in the EU context has implications for antitrust and environmental policy in any other country. Collaboration among companies is fairly common in many industries, as the EC recognized. In fact, the German automakers have hundreds of working groups which they use to develop and test new technologies. Yet competition authorities must be aware that such cooperation carries with it the danger of collusion, if not on prices, then on other attributes that could be detrimental to society.

When I’ve been asked how much collusion there is, I’ve responded that I think collusion is more pervasive than what we think. Even more, many times companies themselves either don’t know or aren’t aware that their relationships with other companies, like small talk about what can happen in the market at a trade association event, could be illegal. That’s why antitrust authorities should do a better job of educating companies about the law.  At the same time, governments should allocate enough resources to find and punish colluders with a fine that is large enough to deter other potential offenders.

About the Author
Dr. Jorge Alé-Chilet is a Chilean-born researcher based in Israel and a member of the Department of Economics at Bar-Ilan University. He received his PhD from the Hebrew University of Jerusalem and was a post-doctoral researcher at The Wharton School of the University of Pennsylvania.
Related Topics
Related Posts
Comments