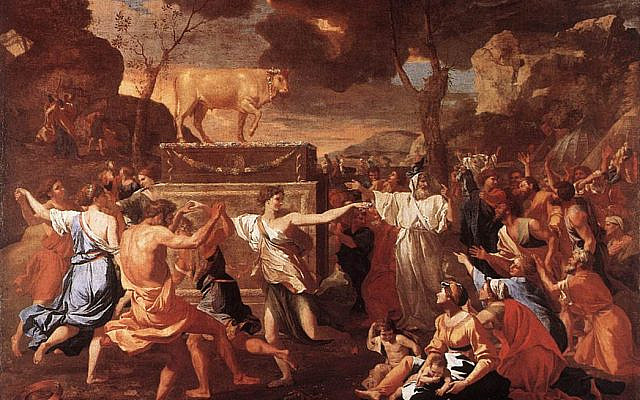 Why was the Golden Calf specifically a calf and not any other animal or cultic symbol? What meaning did its specific form communicate to the young nation?

The young nation was desperate for the solace provided by Moshe’s perpetual communion with the divine. They waited anxiously for his return forty days after he ascended into the clouds atop the fiery mountain to receive the law. Now, fearing his demise, in a desert without food or water and surrounded on all sides by enemies, the nation was justifiably terrified. The interim leader, Aharon, was inadequate to quell their concerns. The nation’s demands were simple, “make for us an elohim (god/authority) to go before us” because we no longer have Moshe (Shmot 32:1). The people wanted a divine intermediary. Moshe was the medium through which the mundane nation could receive inspiration from, and communicate to, the divine. The people were demanding an alternative intermediate.

Confronted with a destabilizing nation, Aharon had limited options. If he denied their request they might disintegrate into chaos, splintering into bands seeking refuge, even possibly returning to Egypt as they had threatened before. Presumably Aharon had to create something material. His words were not enough. Moshe could satisfy with words alone as his supplications resulted in divine action. However, Aharon would need to act tangibly. What icon could he choose to communicate to the people their enduring connection with the divine?

Some relevant ancestral imagery might be the lamb or the ram; representing Yaacov and Yitzchak, respectively. The stories of the forefathers are replete with animal imagery and those references carry depth and meaning. Yet, surprisingly, the image of a calf was used. An animal whose limited three prior references carry no obvious religious or cultural significance for this moment: it was one of the three animals split at Brit Bein Habitarim (Breishit 15:9), it was the animal served by Avraham to the angels (18:7) [ben bakar, not egel], and it was in Pharaoh’s dream (41:2) [cows not calf]. Nothing in the corpus of Israelite culture provides definitive context for a calf. Yet, Aharon specifically built a calf to satisfy the existential needs of the nation.

The truth was that the nation had limited uniquely shared culture at that point other than slavery and the few weeks since the exodus. They were hundreds of years removed from their forefathers or Canaan and were contemporarily steeped in Egyptian culture and religious cultic practice and iconography. Egyptian culture was the only collective reservoir to derive meaning for the nascent nation. Aharon’s solution was obvious, utilize a recognized Egyptian religious icon of intermediacy to the divine.

One of the most popular and well recognized religious symbols in Egypt throughout its entire history was the cult of Apis, a religious entity that revolved around the deified intermediacy of a bull. The cult of Apis (Hapi in Egyptian) was popular throughout Egyptian history dating back to the earliest dynasties. The Apis bull lived in the temple of Ptah in Memphis and served as the tangible manifestation of an all-powerful god (originally Ptah, later Osiris, then Atum). This intermediate allowed commoners access to divine communication. Egyptians would visit the temple to ask the bull questions and interpret its actions as responses from the god.

The functional comparison between the Apis bull and the Golden Calf are obvious, however a bull is not a calf. If the goal was to recreate a classic Egyptian religious icon, then why make a calf? The following is an excerpt detailing the cult of the Apis Bull which provides a remarkable insight:

“Since the Apis Bull was a living creature, it would eventually die, prompting… the search for a new Apis bull…. This new Apis would be a calf…. they took it to Nilopolis for 40 days of feeding after which time it was transferred via a boat inside a gold cabin to the temple of Ptah where it was greeted by the people who came to view their reincarnated god and hoped to have their questions answered.” (A Popular Account of the Ancient Egyptians: Volume 1)

Sources elaborate on the incredible cultural importance the Apis Bull represented to the Egyptian nation, allowing them access to the divine. Following the death of the current Apis bull was a time of great anxiety as the nation was unable to communicate with the divine. When a new Apis Calf was found it was ecstatically celebrated, representing a return of divine communion.

There were other Egyptian and Canaanite bull cults, e.g. Buchis, Mnevis, El, which could have been the inspiration for the Golden Calf, however, the specific chronicity, procedures and celebrations of the Apis Calf are highly suggestive that it was the motivation behind the Golden Calf. Moshe had been on Har Sinai for 40 days and presumed dead and the Golden Calf arrived on the 40th day, just as an Apis Calf is prepared and revealed after 40 days following the death of its predecessor. The calf was made of gold, just as the Apis Calf arrived at the temple in a golden cabin. The people wanted an intermediate to serve between them and god, so Aharon created for them the religious entity they were familiar with in Egypt that served as an intermediate between them and god. And just as the Egyptians would celebrate the arrival of a new Apis Calf, so too the Israelites celebrated the arrival of their new intermediate.

Further still, yet admittedly more of a stretch, the procedures for identifying the Apis Calf have curious similarity to the para aduma, the red heifer. This heifer needed to be composed of only red hair among other criteria for it to qualify. Similarly:

This new Apis would be a calf with very specific aesthetic features as described by Herodotus… A priest appointed for the purpose examines the animal, and if he finds even a single black hair upon him, pronounces him unclean; he goes over him with the greatest care….”

Perhaps the para aduma was the perfect symbol for the nation’s purification. Whereas in its infancy the insecure nation demanded intermediacy, demonstrating its allegiance and reliance on the religious practices and beliefs of Egypt. However, in its maturity the nation would perpetually affirm its rejection of those beliefs. Unlike the Apis Bull that is meticulously identified and then revered, the para aduma is meticulously identified and then promptly killed and burned, communicating to the people that the para aduma is not an intermediate between man and god, but the means by which man becomes purified to reconnect himself directly with the divine.