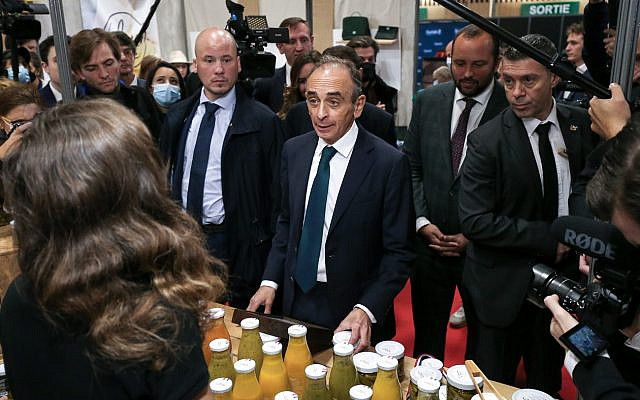 French far-right media pundit Eric Zemmour visits the ''Made in France'' fair at the Porte de Versailles, in Paris, on November 14, 2021. Eric Zemmour

Eric Zemmour has been a French journalist and political commentator since 1986, when he began his career. He has always been considered an eloquent right wing thinker who presents his ideas calmly and logically, and with great conviction. No one thought of Zemmour as a politician, not until recently, when rumors that he would run for the presidency began to spread. Since then, his popularity has skyrocketed and from near anonymity, he became the leading candidate of the right, trailing incumbent president Emmanuel Macron by only seven percentage points. Since the French presidential elections are conducted in two rounds, and only the two leading candidates compete in the second round, the prospect of Zemmour becoming president is very real.

But Zemmour is not only a journalist, he is also Jewish. In a liberal society like France, we might think that a person’s religion is immaterial in politics. However, if you are Jewish, it is a different story. Zemmour himself does not make an issue of his Jewishness; he wants people to relate only to his views on France’s burning issues. However, in France—with its history of deeply rooted antisemitism and millions of migrants who have moved there over the past several decades, and to which Zemmour proposes a tough approach—Zemmour’s religion will clearly be an issue. In my eyes, France’s Jews have much to worry about as it is, but the last thing they need is a Jewish president, and they will do what they can to avoid it.

As a whole, it is not good for Jews to be political leaders in any country besides Israel. Jews are always under scrutiny, so a Jew as head of state will be many times more so. Nothing good will come from such attention. It will only intensify Jew-hatred and possibly accelerate the advancement of Islam in France.

Jews have a very particular calling. Until we realize it and present it to the world, we should not be in the forefront. We have no business fighting for principles and values that, however meritorious, have nothing to do with the correct conduct of the Jewish people. It will not help Jews, it will not help the world, and there is nothing in this whole campaign but the pride of a man who wants to be the leader of the French. It is simply unwise. Without intending to, Zemmour as president will be very bad for Jews—in France and elsewhere.

The only role that Jews should play in the world is that of fostering unity, solidarity, and mutual responsibility among all people. This is the true legacy of the Jewish people, the tenets of Judaism that the entire world admires, but which no one can realize. The Jews, as progenitors of these noble ideas, and who established their ancient society on them, must rebuild their union in order to set an example for the world. Then, after they reconnect “as one man with one heart,” they will have an asset that will earn them the appreciation of the world.

Jewish leadership is not done through power or authority, but by personal example. In antiquity, in times when we had a unified society worth learning from, we did not need to exert power in order to succeed. People came to Jerusalem to learn how we lived and implement our ways in their own countries.

For example, the book Sifrey Devarim writes that when Jews celebrated their unity during the festivals of pilgrimage, people from around the world would “go up to Jerusalem and see Israel … and say, ‘It is becoming to cling only to this nation.’”

In those days of solidarity, Ptolemy II, king of Egypt, summoned seventy sages from Jerusalem to translate the Five Books of Moses into Greek, thereby creating the first translation of the Bible. But before he sent them off to translate, he sat with them and learned from them. According to Flavius Josephus, after two weeks of extensive learning he said “he had learned how he ought to rule his subjects.”

Even notorious antisemites related to the ancient Jewish society as a role model. The infamously antisemitic car maker Henry Ford wrote in his composition The International Jew: The World’s Foremost Problem, “Modern reformers, who are constructing model social systems on paper, would do well to look into the social system under which the early Jews were organized.”