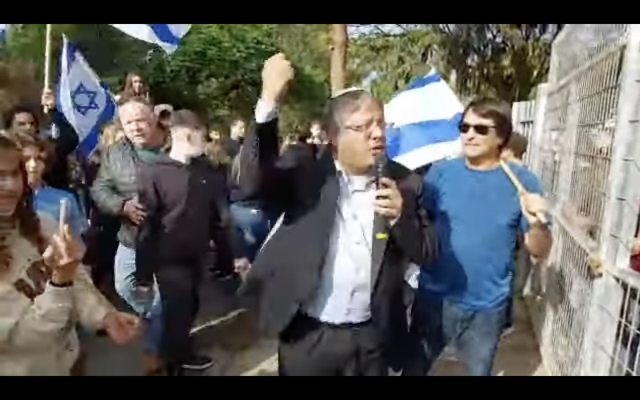 You’d think the Israeli public – and the politicians elected to look after their best interests – would appreciate hearing from Palestinians who condemn violence and seek peace. So why are Members of Knesset and their party activists protesting and threatening Israeli high schools who invite Palestinians and Israelis bearing such a message to speak with their students?

This past Thursday, speakers from the Parents Circle-Families Forum were scheduled to present to students at the Mae Boyar High School in Jerusalem where my son studies. Like all the members of the Parents Circle, both Israeli and Palestinian, those scheduled to speak have lost loved ones in the conflict and responded to this horrifying loss by working together towards ending the violence and achieving a peace agreement. This includes presenting their personal stories and message at high schools across Israel, such as Boyar. However, activists involved in the Otzma Yehudit (Jewish Power) political party called for a protest against holding the event and hosting “families of terrorists.” In the end, the event at Boyar was canceled, supposedly to be rescheduled for a later date (see also articles in Yediot Ahronot and Haaretz).

This is not just a matter of concern to the school but to the public at large, as it’s part of an ongoing battle to repress public debate about the Israeli-Palestinian conflict. This is an important and pertinent topic of discussion for Israeli schools which are responsible for preparing students to become engaged citizens. All the more so given that the first act of citizenship for most Israeli Jewish students following graduation is compulsory military service, where they risk losing their own lives or taking the lives of others as part of this conflict.

Debate and protest are critical to a healthy democracy, but the protest organizers are resorting to language and behavior that could be considered threatening and inflammatory in their efforts to ban such discussions.

In response to the Boyar decision not to hold the event last week one of the activists involved in organizing the protest posted the following: “I am certain that the rebellious principal won’t repeat this mistake in the future,” he wrote. “I turn to school principals throughout the country: Focus on educating towards love of Israel and loyalty to the homeland. Don’t poison tender hearts or else you will find me in front of you. And trust me that’s not worth it.”

The language and word choices are accusatory and threatening: the principal is “rebellious”, students are being “poison[ed]”, it’s implied that those who don’t teach loyalty to the homeland are disloyal or traitorous, and there’s the troubling warning that “you will find me in front of you. And trust me that’s not worth it.”

Sensible principals will think twice before exposing themselves and their students to these protests, whether to avoid the anticipated hassle or out of understandable fear. But giving in to these threats is a terrible mistake, both for how it undermines core aspects of democracy and represses important debate about the conflict.

One can guess what the protest might have been like from a video posted on the Otzma Yehudit website of a demonstration they held at the Hof Hasharon high school in Shefayim who had hosted Parents Circle speakers a week before the Boyar incident. In the video Otzma Yehudit MK Itamar Ben-Gvir is shown telling protestors:

Calling the Parents Circle speakers terrorists and claiming that they are the ones who threw stones and Molotov cocktails propagates a falsehood, contradicts the very spirit and intention of the speakers, and dehumanizes them. Ben-Gvir’s rhetoric and tone are provocative, manipulative, fearmongering and potentially inciting.

Perhaps some of the Otzma Yehudit activists realized this, as the website page about this rally, including the video clip of it, provides written text quoting what Ben-Gvir supposedly said at the rally, but the print version differs from what he actually said as captured in the video in significant ways:

“Chairman of Otzma Yehudit MK Itamar Ben-Gvir came to the demonstration and said, ‘They call themselves bereaved families, but they are not bereaved families, they are families of terrorists who threw stones and Molotov cocktails at soldiers… It is good that the IDF soldiers hit those terrorists.’”

Two substantive changes are made. While in the video he stated that the speakers themselves were terrorists and had attacked soldiers, the written version backtracks, using the (still inflammatory) rhetoric that the speakers are “families of terrorists”. While in the video he says: “thank God they killed them!”, the word הרגו, ‘killed’ in Hebrew, is replaced in the written quote with the word פגעו, which can mean harming, hitting or wounding. These changes may indicate awareness of the problematic nature of his words, but they do not negate the harm of his speech at the Hof Hasharon protest heard by all who attended, and which is still easily viewed on the video clip.

Debate about the Israeli-Palestinian conflict is necessary and protests regarding any given position on the issues at hand are legitimate, but they should be deployed without threats or incitement. We know all too well in this country where that can lead to. The fact that an elected member of Knesset is leading such protests requires scrutiny both of him and of ourselves if we don’t oppose it. School principals should not have to stand alone against these threatening pressures; they should have the unwavering support of the Ministry of Education, as well as of parents, politicians and citizens who care about these issues.

The Palestinian and Israel family members who lost loved ones to the conflict could have easily responded with hatred, violence or vengeance. Instead, they turned to each other and committed themselves to a path of reconciliation. If they have the courage to do that, can’t we have the courage to listen? And if Israeli Jewish students must serve as IDF soldiers bearing the weighty responsibilities and risks of protecting the rest of us from violence, can’t we allow them to listen to those taking such a brave stance against violence? We must have the courage to support schools that bring such speakers.