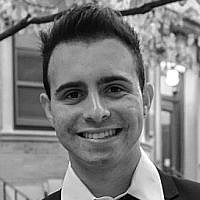 The Blogs
Raphael Fils
Apply for a Blog
Advertisement
Please note that the posts on The Blogs are contributed by third parties. The opinions, facts and any media content in them are presented solely by the authors, and neither The Times of Israel nor its partners assume any responsibility for them. Please contact us in case of abuse. In case of abuse,
Report this post.

As a senior in high school, I visited many college campuses across the country, but Boston University caught my eye. Coming from a Jewish high school, Judaism was a big part of my life so after seeing BU’s beautiful Hillel building and large Jewish community, the decision to go to BU was a natural choice for the next chapter of my life.

Now a junior at BU, I can no longer stay silent about why the Hillel has ruined BU’s Jewish community. With thousands of Jewish students, BU Hillel should be a powerhouse. Yet, Hillel is becoming irrelevant on campus. How can a Hillel with so much potential become one of the least respected Jewish organizations on campus? There are many places where things went wrong.

The beautiful Hillel building is not actually owned by Hillel. When the new Hillel building was being built, BU Hillel had to sadly transfer ownership of the building to BU as they had ran out of funding. This showed Hillel’s inability to manage its funds, which had undoubtedly hurt the Jewish community. Even though ‘Hillel’ remained on the naming stone of the building, the Hillel community has been hindered from reaching its full potential.

With BU now owning the Hillel building, Hillel had to give into BU’s demands, such as working with more non-Jewish campus groups and banning Hillel from working with some Jewish organizations like AEPi, an off campus Jewish fraternity supported by AEPi national, that has a complicated relationship with BU. Because of these actions taken by BU Hillel, many Jewish students are discouraged from getting involved with Hillel, which creates a real loss for our community. BU Hillel shouldn’t be focusing on getting more non-Jewish students into the building but rather on reaching out to the thousands of Jewish BU students who have no connection to the Hillel whatsoever.

Though BU has a chokehold on Hillel, Hillel isn’t without fault in its downfall. Every year Hillel experiences major staff changes, indicative of its lack of stable leadership. Next semester will mark the third semester Hillel has been without a Rabbi, making many Jewish students struggle to find their Jewish identity. Students are thankfully greeted with organizations like Chabad, Aish, and MEOR to find their Jewish identity, but the lack of a strong Hillel has its toll on the community. Numerous students have even chosen to transfer from BU to other schools with stronger Jewish communities. Even students that just transfered to BU, such as BU Junior Sharon Chitayat has said she “transferred to BU for the Jewish community, however, after being here less than a semester, I’m greatly disappointed in BU Hillel. I have now turned to Chabad to explore my Jewish identity.” It has become clear BU Hillel is unable to serve BU’s Jewish community, but what else shows how Hillel is greatly suffering now?

This semester Hillel events are under attended, having the lowest turnouts ever. During the high holidays, the most attended services of the year, the minyanim weren’t even close to filled. The conservative minyan had fewer than 50 people while the Orthodox community couldn’t even get a minyan until almost noon, and only after pulling students from the other two minyanim were they able to have a minyan. Birthright numbers are low for a school with thousands of eligible students. Social events, such as Hillel Formal, one would expect large numbers. But even it only brought out 80 students. The student board had to beg AEPi brothers to bring students to the Hillel event, which contributed to over half of the students in attendance.

Recently, the Hillel student board voted to accept J Street U, a political policy group, as a club under the Hillel umbrella. This was against the wishes of over 200+ BU Jewish students and many donors, many of whom wanted the Hillel to remain free from political groups. This isn’t about political views, this is about creating a Hillel atmosphere that the BU Jewish community wishes to see, one free from political groups. The current student board does not represent the interests of BU’s Jewish community. Not because they weren’t elected democratically, but because BU Jewish students feel so disconnected from Hillel that they don’t bother to get involved, run for student board positions, or even vote; they’ve lost hope. Hillel has ceased to be “center of Jewish campus life” as it claims to be.

Join me, and hundreds of BU Jewish students and supporters, calling for support to help us reform BU Hillel to accurately represent BU’s Jewish community. Learn more and join us at SaveOurHillel.org

About the Author
Raphael Fils is a Political Science Major/Public Relations Minor and Junior at Boston Univeristy originally from Los Gatos, California. He is co-founder of Safe Hillel and Founder/President of the JUMP, a political organization that's the new political home for true Pro-Peace Americans.
Related Topics
Related Posts
Comments