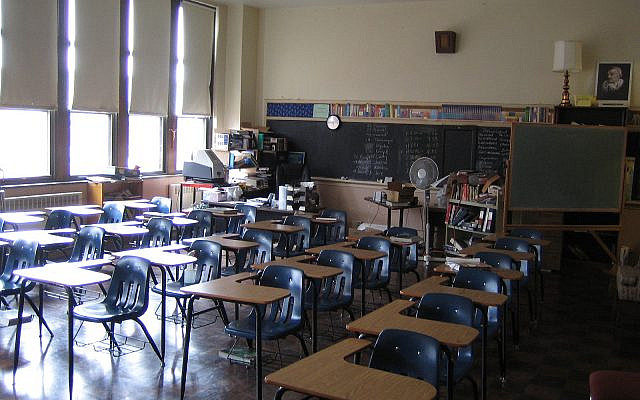 “Spearheaded by the AMCHA Initiative, 90 education, civil-rights and religious groups had called on Newsom to veto the bill, AB-1460.”

“The organizations noted an important distinction between the broad field of ethnic studies—with its goal of understanding and celebrating the contributions of the state and country’s diversity—and the narrow field of “Critical Ethnic Studies” referenced in AB-1460.”

“The groups noted that vetoing AB-1460 was necessary because anti-Zionist advocacy and the promotion of BDS are an intrinsic part of critical ethnic studies; critical ethnic-studies faculty have repeatedly demonstrated a willingness to promote BDS and anti-Zi0onist advocacy in their academic programming and classrooms; and faculty support and promotion of BDS are linked to the harassment of Jewish students.”

Despite the voiced concerns of many educators and pro-Israel groups, including IBSI, the curriculum is now a requirement for California State Universities. As black leaders and Zionists, the responsibility is on us. I include black leaders in the previous statement because the new curriculum also does a horrendous disservice to black Americans and our history. Pivotal Black American figures like John Lewis and Dr. Martin Luther King Jr. are invisible or portrayed as ‘passive’ and ‘docile,’ and ideologies like Marxism and Communism are elevated, promoted, and romanticized. The proposed curriculum makes no mention of Black community’s historic working partnership with Jews but instead elevates the voices of those who perpetuate anti-Jewish views.

Our fight is threefold: cultural, political, and biblical. We cannot ignore one and expect the others to be any less difficult. But that is exactly what we are doing when we give Black Lives Matter a pass on their antisemitism because we don’t want to look like we are coming against black people. We were quick to try and make a distinction between BLM chapters, or push the false narrative that BLM and M4BL (Movement for Black Lives) were separate, but did not, with the same vim and vigor, denounce the major chapters for their anti-Jewish demonstrations. We did not want to call them out for their obvious Jewish problem, and what’s worse is that we came against others who did.

By ignoring or excusing Black Lives Matter’s antisemitism, we helped enable the new push for the new Ethnic Studies course to be a requirement for graduating high school (AB-331). This is especially evident in the fact that at the hearings, BLM (among many other social justice groups) was represented to voice support, and the M4BL anti-Israel literature was included in the curriculum. The cultural fight is connected to the political and biblical. 87 year-old Jew-hater Louis Farrakhan is more culturally relevant now than ever before, and many BLM leaders follow and admire him. The material in this curriculum concerning the Jewish people is in lock step with many of Farrakhan’s writings and sermons. If we thought witnessing black celebrities, influencers, and NAACP chapter presidents defame the Jews with Nation of Islam/Nazi anti-Jewish talking points was bad, we are not ready for the fruit this curriculum will bear.

Apart from some of the organizations in California who were combatting this from its inception, not enough was done. It is our responsibility to face this threefold problem fully. That means we will have to fight Jew-hatred wherever we see it; even if the optics don’t look good. In this time where it seems that “Black Lives Matter” is displayed everywhere from the streets to the NBA, anyone who would criticize the movement will look like they are criticizing the statement. For us, and many like us, that is not the case. Black lives, of course, matter. This is not the issue. The issue is the antisemitism that is attached to BLM. I will not take time to address BLM as I already have done so in two previous articles: Black Lives Matter’s Jewish Problem – In Their Own Words, The Palestinian appropriation of black pain.

At the Assembly for Conservative Judaism on March 25th, 1968, Dr. King addressed the issue of racism from some in the Jewish community, and antisemitism from some in the black community. He very delicately and succinctly laid out prejudices from both communities, but made very clear that for the black community, it was a small minority, and in the Jewish community, those few racist Jewish landlords or store owners were “not operating on the basis of Jewish ethics; [they are] operating simply as a marginal businessman.” Then Dr. King summed up his thoughts by saying:

“I think the only answer to this is for all people to condemn injustice wherever it exists. We found injustices in the black community. We find that some black people, when they get into business, if you don’t set them straight, can be rascals. And we condemn them. I think when we find examples of exploitation, it must be admitted. That must be done in the Jewish community too.”

These are words that anyone who claims to stand for justice must live by. We have to call out injustice wherever we see it. Dr. King’s famous words “Injustice anywhere is a threat to justice everywhere” was about what we are seeing now. When we give a pass on Jew-hatred because we would rather not be seen a certain way, we are allowing Jew-hatred in our society, which historically never stops with just the Jewish people.

As purveyors of justice. As much pushback as the ethnic studies curriculum received, it was not nearly enough. There probably about twice as many proponents of it as there were detractors at the hearing on August 13th. And those proponents represented many various social justice groups in California. Here were IBSI’s remarks. As you can see, beyond the blatant revisionist history regarding the state of Israel, the curriculum had many other deeply concerning issues. One was the misrepresentation of Arab history with no acknowledgement of the colonization and slave trade of North Africa, or the slave trade that Arabs still run today in Lybia, Nigeria, and Sudan among other countries. After criticism from the first draft, the authors of the curriculum took a lot of the Arab miseducation out, only to slip it back in just hours before the hearing.

The curriculum It also depicts non-violent civil rights figures like Martin Luther King and Shirley Chisolm as docile and passive, in a thinly veiled critique of them working within the system to change the environment for black Americans; all while praising violent radical activists and depicting their tactics as the only tactics that were and are effective.

Furthermore, the new curriculum deals with the Israeli/Palestinian issue in a very poor, irresponsible, and innacurate way. It speaks of the rebirth of Israel as if Europeans came out of nowhere and stole land. There is no nuance, no mention of the Mizrahi Jews, which are Jewish communities from the Middle East and North Africa. There is no mention of the fact that there has always been a Jewish presence in the levant region even after Romans expelled the Jews from Judea in 70AD and renamed it Syria-Palaestina, which is where the name “Palestine” actually comes from. There is no objective critique of the facts. Only emotionalism and revisionism. The first draft of the curriculum even elevated Jew-hating Palestinian voices like a rap song that perpetuates the trope that Jews control the media. This was thankfully not in the second draft, but it begs a lot of questions as to why it was inserted in the first place; especially since the purpose was not to demonstrate what antisemitism looked like. A reasonable person should see that just because the authors removed the overt antisemitic content, does not mean the curriculum is now above reproach. On the contrary. Because the first draft was so blatant in traducing the Jews, we now have a clearer picture of what the overall agenda of this curriculum is.

“Four of yours are dead, right?” the woman asked the Jewish activist, who replied that he doesn’t know. “If they were dead, that’s great,” she said.

Another resident was heard saying, “Get them damn Jews the f**k out of here. Get these f*****g Jews. Get the Jews out of Jersey City.”

Not a single prominent black leader stood up to condemn the shooting. In fact, following the shooting, black leaders like Joan Terrell-Paige, the New Jersey school official wrote a Facebook post calling Jews brutes and expressed sympathy for the shooters. We let this happen by not standing as a united front against Jew-hatred. When one considers the fact that Jews have been the biggest recipients of hate crimes in the US, and that those hate crimes are backed up or ignored by the culture, politicians, and community leaders, the content in the ethnic studies curriculum for California schools becomes much less of a surprise.

“The mere imparting of information is not education. Above all things, the effort must result in making a man think and do for himself just as the Jews have done in spite of universal persecution.”

The onus is on us. We still have a chance to make our voices heard and turn the tide. I personally am signing this petition by an organization on the front lines of this, Black Americans for Inclusive Ethnic Studies (BAFIES) expressing grave concern for this and urging Governor Newsom to call for a major transformation of the curriculum. Please sign as well and send a loud and clear message that we will not sit idly by and watch our children’s minds poisoned.

In the Scriptures, Hosea 4:6 says “my people are destroyed for lack of knowledge.” This curriculum will destroy our next generation if we don’t stand up. Now is the time.

About the Author
Joshua is the Director of the Institute for Black Solidarity with Israel (IBSI) where he plans events and speaks. He’s a composition graduate of the University of Pacific’s Conservatory of Music. Joshua was formerly IBSI’s Director of Special Events, and planned music performances featuring The Hebrew Project Artists (THP) across the country. Joshua is also a graduate of CUFI’s 2016 Diversity Outreach Mentoring Endeavor (DOME), where he received training in Israel advocacy for diverse audiences. He was chosen to travel to Israel twice; once as part of CUFI’s millennial outreach, Israel Collective, and again as part of a music performance with Victor Styrsky’s Wild Branches & Friends. His other musical endeavors include writing for the Boston Pops, and music directing for other artists. Joshua is also a featured author on a collaborative book called 'Israelophobia and the West: The Hijacking of Civil Discourse on Israel and How to Rescue It' by Jerusalem Center for Public Affairs official, Dan Diker.
Related Topics
Related Posts
Joshua Washington
Comments