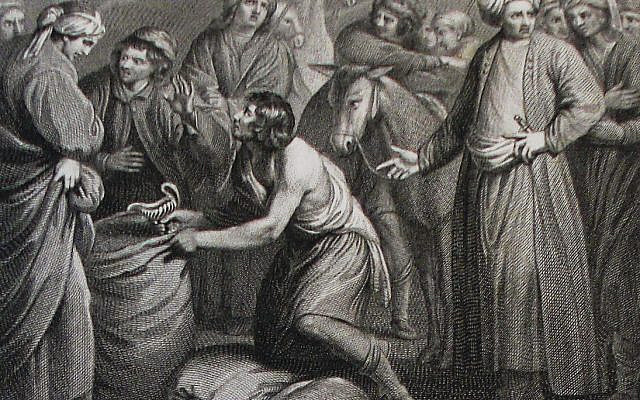 Why did Joseph not use his power as viceroy to contact his father? Why did Joseph create such an elaborate ruse to deceive his brothers? What was the goal?

During the dramatic final moments of Joseph’s (Yosef) deception of his brothers in Egypt the text uses a curious verb, apak, ‘refrain,’ to describe some pivotal scenes. The first in Bereshit 43:31 was after Yosef first saw Binyamin and he ‘refrained’ himself. This refrain implies that Yosef was otherwise compelled to act differently. He was compelled to break character and reveal his charade. Instead he refrained and continued the act. But why? What did maintaining this painful ordeal accomplish? The answer requires the reader to comprehend Yosef’s perspective and the goals he sought to achieve with this elaborate facade.

Obviously, Yosef suspected the evil intentions of his brothers. However, Yosef was uncertain about what compelled them? Was it simple jealousy of a favorite child or was there something more nefarious. The various scenes orchestrated by Yosef communicate his dark suspicions. The text ultimately reveals that Yosef suspected his brothers’ malice was not simply against him but rather the entire house of Rachel. However, he feared most of all that the leader of this hate was not his brothers but his father.

The penultimate experiences of Yosef with his father were the disappointment Yaacov expressed at Yosef’s behavior disparaging his brothers with his dreams and creating animosity in the family. Yosef had no way of knowing that his father was actually eagerly anticipating his ascension to greatness since Yaacov kept his personal aspirations for Yosef’s greatness a secret (37:10-11). The last thing Yosef experienced from his father was the curious instruction to seek out his brothers far from home (37:13-14). The same brothers that had previously expressed their hatred for him. A command that ultimately led to his capture and sale into slavery. Further reinforcing Yosef’s suspicions, Yaacov also harbored disdain for Binyamin that was obvious however passive. Despite later holding onto Binyamin as a remnant of his mother, Yaacov never actually expresses that he loves Binyamin. Only Yehuda later makes the claim to curry favor with the viceroy (44:20). The text similarly hints to this effect when Yaacov referred to Yosef as his ben zekunim, son of his old age, even though Binyamin really held that title (37:3). Yosef likely suspected this was due to Yaacov’s lingering resentment against Binyamin for precipitating the death of Rachel. However, what if Yaacov’s hate was for the entire family of Rachel, including Rachel herself.

As a child Yosef remembered their flight from Lavan who demanded his terafim which his mother had stolen (see “Why Did Rachel Steal the Terafim?”). Yaacov cursed her that day saying that whoever stole them should die. A premonition Yosef would witness was fulfilled. Now years later, piecing together all of these terrible memories and events, Yosef concluded the only cohesive narrative. Yaacov hated Rachel and her whole family and devised to wipe them off the earth.

Yosef knew his brothers hated him, but as a slave in Egypt he had plenty of time to rue about the events that preceded his decline. Unable to shake the creeping suspicion that it was his father that had ordered his demise, he also feared for his younger brother’s fate as well. However, knowing the tenacity and cruelty of his family history, he assumed they struck against Binyamin once Yosef was sold knowing there was no one left to protect him. This made Yosef the sole remnant of the family of Rachel. This is why Yosef not only didn’t attempt to reconnect with Yaacov when he became viceroy, he also withheld potentially life saving information of the coming seven years of famine. He absolved himself of all consideration for his treacherous birth family. The text supports this perspective by detailing the names chosen by Yosef for his sons born to him in Egypt (41:51-52). His eldest was Menashe because he was grateful to have forgotten his suffering and his father’s house. His second son, Ephraim, celebrated his transition to success in a land that was intended to cause him suffering. Yosef had moved on with his life. Uninterested in rekindling with a family that literally sold him into slavery and likely destroyed the remainder of his maternal family.

The text further supports this hypothesis through the detailed tribulations Yosef thrust upon his family. As stated above, Yosef’s contempt for his entire family was evident by his disinterest to warn them of the impending famine. Additionally, Yosef did not simply want justice from his brothers’ sin against him as he could have immediately reported his existence in Egypt to his father when he was viceroy. When the brothers initially came down to Egypt without Binyamin (42:13), Yosef feared his suspicions were true and they had disposed of Binyamin as well. Yosef pressured the brother’s on the fate of Binyamin, compelling them to reveal if he was still alive (43:7). Once confirmed Yosef devised a plan that would force them to return with Binyamin. Yosef knew there were at least 5 more years of famine, so the brothers would certainly need to comply with his demand to bring Binyamin back with them or they would all starve. However, there was a pivotal flaw in his plan. Yosef and Binyamin were likely 12 years apart in age. This means Binyamin was only 5 when Yosef was sold. Yosef knew he could not be certain he would recognize Binyamin let alone be recognized, nor could he confidently confirm his identity with any shared familial memories. This is why Yosef held Shimon imprisoned until the brothers returned with Binyamin (42:24). An isolated Shimon would be used as an independent confirmation of Binyamin’s identity.

All of Yosef’s plans still did not involve his father. Yosef likely assumed that after more than 20 years his elderly father had likely passed away (43:7,27), but even if not Yosef still suspected him of evil, therefore prioritized the safety of his maternal brother. Once he had accomplished this goal he should have been satisfied if his intention was merely to secure the remnant of the house of Rachel from the hands of those that might harm them. This is why he had to refrain himself as there was more to achieve (43:28-31).

Now that he had secured Binyamin, Yosef desired justice. He wanted to confirm his suspicions that the brothers had acted against him either motivated by jealousy or familial hatred of Rachel. Yosef brought all the brothers to eat at his table but gave exceptional attention and gifts to Binyamin to the visible exclusion of the other brothers (43:29,32,34). Yosef was testing their jealousy by repeating the events of their youth when Yaacov showered Yosef with praise, love and special gifts to the exclusion of his brothers (37:3-4). If their malice towards Binyamin was not already inflamed then Yosef would exacerbate them further. This was so important to Yosef that he even included Binyamin in his scheme, knowing his next test would subject Binyamin to psychological threats of imprisonment and enslavement.

Sending the brothers from his home, sated with saddle bags full of food, Yosef concocts a recapitulation of family trauma that everyone but Binyamin would remember, combining two critical events in the lives of Yosef and his paternal brothers. Many years before while fleeing the house of Lavan, they were chased down by Lavan and threatened as thieves. Ultimately this led to Yosef’s father’s curse upon his mother. Yosef creates the exact same scenario. As the brothers are returning home, Yosef’s men chase them down and threaten them as thieves. Yehuda even reiterates his assurance of their innocence by condemning such a thief to death, just as his father had done. Ultimately Binyamin is identified as the thief and arrested to be punished with slavery for his crimes. Yosef’s challenge has been set. Will the brothers abandon to slavery their spoiled brother of a despised co-wife to their mothers?

Yosef was likely surprised when all the brothers accompanied Binyamin back, accepting their fate together (44:16). They had not abandoned him as Yosef suspected. Yosef grants them one last opportunity to abandon Binyamin, reiterating that only Binyamin is doomed for slavery (44:17). Instead of fleeing Yehuda offers an impassioned plea to excuse Binyamin of his crime, offering himself instead for enslavement (44:33). However there is one last detail offered by Yehuda that breaks Yosef free of all his suspicions. It was obvious the brothers held no malice against their spoiled younger sibling or the family of Rachel but what about Yaacov. Why had he sent Yosef into the hands of his captors to be sold into slavery?

Yehuda now reveals to Yosef that Yaacov was not involved but instead mourned the loss Yosef he assumed was due to a terrible accident (44:27-28). Now all of Yosef’s suspicions have been resolved. He no longer must maintain the charade and he finally breaks his ‘refrain’ (45:1). Yosef is finally relieved of his animosity towards his father. His father does love him and mourned his absence terribly every day. Yosef is overcome with emotion having realized the terrible loss of time he has suffered from his father. This is why the first thing Yosef says after he reveals himself is regarding the wellbeing of his father. All he can think about is reuniting with his beloved father (45:3).