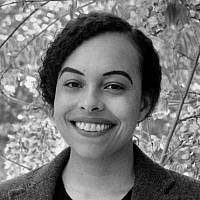 The Blogs
Cheyenne Paris
Apply for a Blog
Please note that the posts on The Blogs are contributed by third parties. The opinions, facts and any media content in them are presented solely by the authors, and neither The Times of Israel nor its partners assume any responsibility for them. Please contact us in case of abuse. In case of abuse,
Report this post. 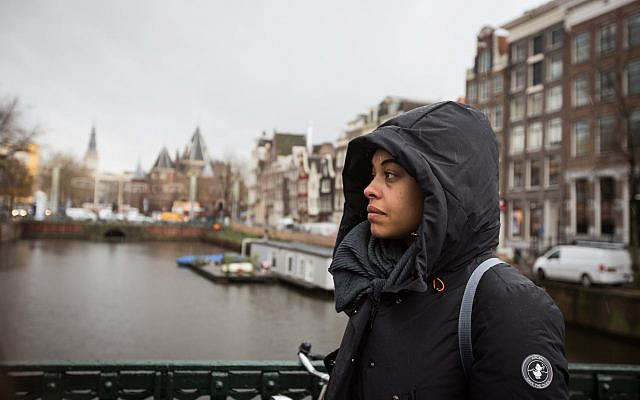 Paris on Holocaust memory trip in Amsterdam with Together, Restoring Their Names.

Why do we learn about the Holocaust?

For some, that question is easily answered.

“My grandmother was a survivor.”

“My father was a survivor.”

“Half of my family perished in the Holocaust.”

I don’t have a familial connection to the Holocaust. I first learned about the Holocaust when I picked up a book at a Scholastic Book fair when I was around six years old. That initial engagement with the subject of the Holocaust sparked in me a passion for the history. From that day on, I’ve never stopped learning about the Holocaust. I’ve read countless books, watched who knows how many movies, I’ve met with survivors, visited camps in Europe, patronized dozens of museums and memorials, and I’m writing my master’s thesis on Holocaust education.

For me, I cared and therefore I learned. So, what about the people who don’t necessarily care?

We need to teach them why they need to care.

When I picked up the book at the Scholastic Bookfair at my elementary school, I was transported to a fearful and uncertain world, far from my full comprehension, and I wasn’t a naïve kid. Being mixed (my mom is black, and my dad is white) in America, in the 90’s, doesn’t allow for you to be naïve. And to top it off, I lived in Fairfield County. I knew that when I went to the store with daddy people were nice to us and asked us if we needed help. I would receive smiles and “look at hers”. When I went to the store with mommy, we usually had to chase down an employee and avert our eyes from narrowing, suspicious stares. I hadn’t learned the word “racism”, but I could identify it in a line up with one eye closed.

As I walked into the Scholastic Bookfair twenty years ago, there was something about the black and white picture on the cover and the young girl smiling back at me that made me pick up the book. I read the name — Anne Frank. It was probably then that I read the word “Holocaust” for the first time. It probably wasn’t until I got home and sat down with my new book that I learned a fraction of its true definition. “An event of great global significance during World War II. It forced millions of people to leave their homes and hide for protection, similar to the Frank family”. I didn’t understand why they had to hide, but I learned Anne Frank had to hide because she was Jewish.

It was probably that small fact that made me care. I felt connected to Anne Frank. Not because I’m Jewish, because I’m not. But because I knew what it felt like to be singled out as different for who you were. It was the year before that in Kindergarten that a student asked me why my parents were “two different colors”. I didn’t respond because until that moment, I didn’t know my parents were two different colors. They were just mommy and daddy. It made me self-conscious that this was something to remark on, that it was “not normal”, and that therefore I was “not normal”. I can’t remember any racist incidents in school before first grade, maybe because I repressed them or didn’t have a name for them. Either way, being brown was not unheard of, but I learned that having parents who were two different colors was “not normal”. This taught me early on that “not normal” to some, is something very valuable to another.

I was also familiar with religious “otherness” at six. Anytime I had friends over in the evening, all they would want to do is stand at the door of my dad’s office as he did his “prayers” — is what we call them. My friends would be mesmerized by the foreign words my father chanted and the elaborate altar bookended with varying fruits and greenery.  My dad would pause for a breath, rub his beads together and continue. I would have to pull my friends away as they stared captivated. I, on the other hand, was annoyed — this was nothing new. “He does this two times a day. Come on!” They would reluctantly follow my lead and we would return to our game. My father, a Buddhist, has been practicing for 2/3 of his life. It has been an essential part of my open-minded upbringing and desire to learn about “difference” in the world. My mom, a protestant, was supportive but not participatory in my father’s faith. This taught me the lesson of mutual respect and understanding. I was never picked on for being a Buddhist, in part because I didn’t tell a lot of people. From my own friends’ reactions, I knew it was “not normal”. I was embarrassed to be “not normal” but I was never ashamed.

So, as a two-fold “not normal” six-year-old, I thumbed through the glossy pages of the book about Anne Frank. To me, a very normal looking young girl, but she was different, like me; different from the people around her. It was perhaps, in that first night of bringing home my first Holocaust book that I also learned Anne Frank died young because of her difference.

What I learned at five, six, and what I am still learning at 27 is the power of difference.

Difference has the capacity to create fear. From fear — hate. From hate — discrimination. From discrimination — violence. And from violence — death.

I study, learn, and teach about the Holocaust because what I couldn’t understand at six, and still struggle with today is “why?”. Why do we fear difference and then choose to hate it? Why is our instinct not to open our arms and welcome it? Many have answers to this question. So, I choose a different question — “how do we change our response to difference?”

During World War II, humanity did not do enough. There were exceptional men and women who found opportunities to intervene and save lives, and many died in their efforts. But on the whole, powerful men, women, and countries stood by and did nothing as men, women, and children were murdered by the millions. The Holocaust, the attempted elimination of European Jewry, was not about Judaism as a religion, it was about Jewish people as a race. “A subversive race, corrupting and controlling the powers of the world for their own gain”. “A race that threatened the very purity of the Aryan world”.

The National Socialists, Nazis, used pseudoscience to perpetuate their racist claims. It was easy for the Nazis to convince people of their allegations against Jews. Anti-Judaism, discrimination against the religion of Judaism and the Jewish people, had been rife in Christian Europe for thousands of years. The public easily bought into the Nazis’ antisemitic troupes that had long existed throughout Europe. They rallied behind the hate.

Again, I ask myself, why? Why did the early followers of Christianity choose to turn against their Jewish brothers? Why was that hate sustained throughout the centuries? Many have answers to this question. So, I ask — “how do we change our response to difference?”

Black America is no stranger to the byproduct of difference and hate. In recent years the world has watched as America seems to sit on the brink of a race war. Yet, there has been a race war quietly raging in America since 1619. Much of white America is aghast at the onslaught of footage where black men and women are murdered by police officers. However, black America knows that the only thing that has changed is that now the murders are being filmed.

Today black and white Americans take to the streets of America, joined in by several cities around the world, to combat the injustices brought on by hate, fear, and difference. Some condemn the protests as riots, and the protestors as criminals and looters. However, the protests have brought about the arrest and criminal charge of the four men responsible and complicit in the savage murder of George Floyd — the murder that sparked this revolution. White America has waited far too long to stand in solidarity against the systemic racism that exists in America. These past couple weeks have shown the American public both the power of the group, and the conviction of the individual. Positive change is possible, and we are beginning to see the fruits of those labors.

So, imagine with me, if in 1933 when Adolf Hitler was made chancellor of Germany, crowds of people flooded the streets of Berlin to protest against the appointment of an anti-Semite and a racist.

Imagine if in 1935 when the Nuremberg Laws were passed, cities around the world marched in protest against antisemitic and racist legislation.

Imagine if in 1938 upon hearing about Kristallnacht, men and women of all races took to the streets in solidarity with Jewish people and demanded change, reform, and justice.

What kind of world would we be living in? If humanity took a stand against discrimination of all kinds from the start. If humanity saw difference as the opportunity that it is. The chance to spur positive change. The chance to introduce new ideas, new methods and practices. The chance to learn and grow as people. As a global community.

Holocaust education provides humanity with a unique opportunity to learn and grow from an incalculable miscarriage of justice. It teaches about the absolute worst in humanity, and the glimmers of strength, bravery, courage, love, and altruism. This education provides a wealth of opportunity to understand how and why dictators are bred and to understand the actions of the group under tyrannical leadership. It teaches politicians and lawmakers where policies failed and inaction cost millions of lives. It teaches the individual what fear of difference can become.  What can happen when our response to difference is fear. From fear — hate. From hate — discrimination. From discrimination —violence. And from violence — death.

This is why you should care about the Holocaust. And this is why we need to learn about it.

About the Author
Cheyenne Paris is masters student at Brandeis University completing her thesis on youth orientated Holocaust education programming in the US. Originally from Connecticut, Cheyenne is currently living in Berlin, Germany.
Related Topics
Related Posts
Comments