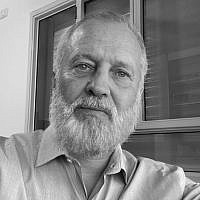 The Blogs
Erez Maoz
Apply for a Blog
Advertisement
Please note that the posts on The Blogs are contributed by third parties. The opinions, facts and any media content in them are presented solely by the authors, and neither The Times of Israel nor its partners assume any responsibility for them. Please contact us in case of abuse. In case of abuse,
Report this post.

This weeks parsha begins a new book of the Torah, the book of Bamidbar. The parsha starts with a census of the Israelite camp, and ends with very specific instructions by God, mandating the conscription of one tribe, the Levites, to service in the Mishkan. The nature of the Levites service in the Mishkan is decidedly secondary to the Cohanim, and as such it often escapes much notice. It also seems to come out of nowhere: the instructions for building and operating the Mishkan and the daily sacrifices were all given to the Cohanim in the book of Vaikra, seemingly without the need for the supporting role of the Leviim.

I think that the parsha itself provides an explanation for why, all of a sudden, Levites are urgently needed in the Mishkan. The commandment to consecrate the Levites in the service of the Cohanim is preceded by a short preamble, which is placed in the text in a way that implies an explanation for what is about to be commanded. These two lines relate to Aaron’s first born sons, who were killed performing a sacrifice in the Mishkan. Is there some sort of connection between the death of Aaron’s sons in parshat Shemini, and the need for Leviim to assist in the administration of the Mishkan?

Answering this question requires us to formulate a theory for why Aaron’s sons were killed, and how replacing them with Leviim might provide a remedy for the initial problem. There are, of course, many  such explanations in the commentaries. The common theme in all of them is that Nadav and Avihu somehow shifted the focus of the religious experience away from God has commanded and (perhaps) onto their own actions or religious experience. My own explanation for what got Nadav and Avihu killed, as I have written elsewhere, locates the origin of the problem in Aaron himself. Right before the Nadav and Avihu incident, it is Aaron who spreads out his hands and blesses the people of Israel. Rashi says that this blessing is the Birkat Cohanim. Interestingly, after this blessing in parshat Shemini, Aaron is basically inactive while everyone listens to a long list of instructions by God, up until the Levite commandments in this parsha, followed by Aaron once again performing a Birkat Cohanim in next week’s parshat Naso. The difference between the blessing in Shemini and the one in Naso is that the blessing in Shemini was not prompted by God and is therefore halahicalli incorrect. Birkat Cohanim (whereby Cohanim spread out their hands and bless the kahal) must be prompted by the hazan, because it is in fact God who is blessing the people and not the Cohen. The Cohen is only a vessel for the Divine blessing. In parshat Naso, when the second Birkat Cohanim is given, God prompts Aaron to say the words of the braha and Aaron responds, which is our tradition to this day.

So what I think is being presented here are two different modes of religious experience. As long as the Mishkan remains in one place, and Avodat Hashem remains entirely within the purview of Aaron and his sons, it remains in a pure and transcendent religious realm. All of the messy details are kept out of sight by one man and his immediate relations. We see many examples in the Torah suggesting that this is something that Bnei Israel greatly desire, because it provides the feeling of direct contact with the divine through Aaron. Aaron, for his part, seems happy to go along. On one occasion the people literally ask him to build an idol, and he complies. On another, he blesses the people without divine command, as though it is within his own power to give a blessing.

This approach, of the religious experience channeled through one holy servant of God is particularly appealing (as we sometimes see to this day), but it is also fraught with danger. It plays into a tendency to set that individual up as the intermediary between God and the people, and for the individual to start to believe the illusion. It also tends to produce dynasties and unsanctioned religious innovations on the part of the intermediary and eventually his successors. In the end, someone ends up being burned to death.

As long as only Aaron and his male line were in charge of the Mishkan, and the Mishkan remained in place, God’s dwelling place on earth remains shrouded in mystery and enables a mystical and transcendent religious experience.

This parsha oversees two crucial changes in the religious experience of Am Israel. The Levites are consecrated in the service of the Cohanim to administer the mundane aspects of Avodat Hashem (e.g. taking apart the Mishkan, handling the vessels needed for the sacrificial cult, etc).  Moreover, the entire experience of the Mishkan is about to become much more mandate. Up to now, the Mishkan that was just constructed remained in a single location under HarSinai. In the following parshiot, Bnei Israel will need to begin their journey to the land of Israel, and therefore the Mishkan will have to be constantly picked up and moved along with them.

This does not sound like a big deal to us, but for Am Israel at the time it must have been a shattering experience. Here is a place where God’s presence is supposed to dwell, where the Cohanim perform His Avoda, which is so holy that even the Cohen Gadol himself can only enter it on specific occasions. Now imagine this entire edifice torn down and folded up every time the people move camp. There is little doubt that this activity would reinforce the corporeality of the Mishkan, detracting quite a bit from its grandeur and mystery. This is precisely the function of recruiting a whole tribe of Levites to perform manual labor for the not-so-transcendent function of folding up and moving the Mishkan. (We see later in parshat Korah that too much of this leads some Levites into trouble – when you see up close the inner workings of any religious process, you are more likely to question its divine premises).

So what I think is happening here is this: Am Israel is constantly looking for a more transcendent and mystical religious experience, which makes sense because people yearn for direct contact with Hashem. This inevitably leads to Avoda Zara, because corporeal human beings are much more likely to make actual contact with a corporeal entity while, ironically, grasping for the transcendent and spiritual. This creates a breakdown in communication with God, and in these parshiot he is trying to teach us how to re-establish the connection.

It is hard to miss that every book of the Torah starts with, and is named for, an element of speech or communication. Midbar is absence of speech, and this represents the breakdown in communication that is about to occur between all of the relevant parties in the upcoming parshiot. But in the root of the word “Midbar” (Daled Bet Reish) is not only the word for speech (Dibur, Daber), but also the key to reigniting our conversation with God: Dvir (meaning Beit HaMikdash). We often look for miracles and transcendence where God wants only prayer and the physical act of sacrifice. If I were to wager what makes most people uncomfortable about the idea of building Beit HaMikdash today (drilling deeper than objections based on technicalities) I suspect that it is precisely the tension between an infinite God dwelling in a place that we build with our own hands. It seems to us a contradiction in terms, much like it must have seemed bizarre for Bnei Israel to see the Leviim fold up God’s tent along with the Shehina. But I think that this is precisely the point that the Torah is making here. God is giving us clear instructions for a relationship with him: tfila and korbanot. It is us who always complicate matters by looking for more-than-human holy men, and feats of magic that defy our perception of reality.

It is the act of folding up and unfolding the Mishkan, and building and re-building the Beit HaMikdash, that makes us worthy of Hashem’s presence, not the other way around. This is why the pasuk reads “veasu li mikdash ve shahanti betoham: build a Beit Hamikdash for me and I will dwell in you.” When we finally get around to building the new Beit Hamikdash, we may not feel like God has moved in immediately, but B’H He will dwell in us to a much greater extent.

About the Author
Erez Maoz is a Rabbi living in Jerusalem with his family. Erez moved to Israel from the US in 2008. He works as a consultant. He can be contacted by email at erezmaoz@gmail.com.
Related Topics
Related Posts
Comments