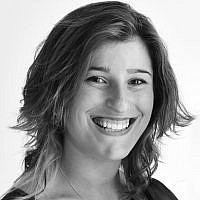 The Blogs
Hannah Sharron
Apply for a Blog
Please note that the posts on The Blogs are contributed by third parties. The opinions, facts and any media content in them are presented solely by the authors, and neither The Times of Israel nor its partners assume any responsibility for them. Please contact us in case of abuse. In case of abuse,
Report this post. 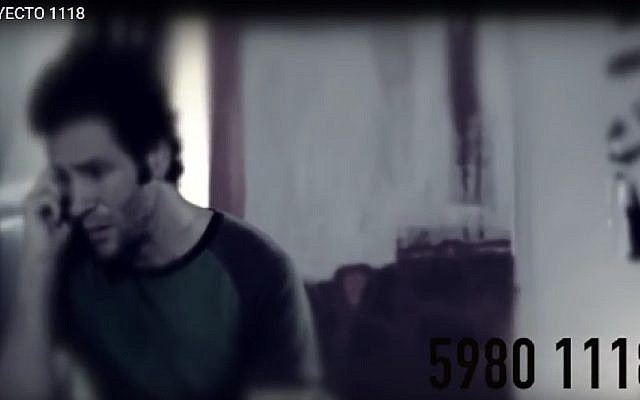 Screenshot from an ad for a 24-hour hotline launched by Mexico Jewish community to offer support for in cases of suicidal thoughts, domestic abuse, depression and so on.

We like to think the best of ourselves. We believe that we’re inclusive, accepting and supportive, as individuals and as a Jewish community. Indeed, by and large, this is the case.

So why don’t Jewish students feel like they can talk about mental health?

When one student disclosed a mental illness to her ex-housemate, she hoped this confidence would help her friend to better understand the thoughts that were swirling through her mind and affecting her behaviour.

Instead, the housemate slammed her bedroom door, telling her that she was being ‘selfish’ by ‘ruining the house atmosphere’, and ‘it would be better if she just went home’.

‘Obviously I was really hurt and upset by her reaction, but I don’t blame her for not properly understanding what I was going through. I probably didn’t explain myself very well as I was feeling really low at that point, but I really could’ve done with a friend’s support and she just didn’t know how to give that to me’, the student said.

This student is not alone: the amount of students who got in touch after we announced the relaunch of Reclaim, UJS’ mental health campaign, was overwhelming. They said that they wanted to be involved due to their experiences of mental illness at university: feeling like they had no one to talk to, not knowing where to seek support from their universities, or not getting the right support from their family members or friends.

The taboo on mental health in the Jewish community has definitely started to dissolve. With campaigners like Jonny Benjamin and charities such as Jami, we’re in a much better place than we were a few years ago. But through talking to our students, we found that although mental health no longer holds the stigma that it once did, many people still don’t know how to offer support to friends who disclose a mental illness.

This is problematic because many students leave home for university (the latest research on this, in 2011 by JPR, showed that of the 925 Jewish students surveyed, just one in five respondents (18%) lived at home during term-time, whilst the majority (82%) lived away from home[1].) These students suddenly find themselves without the support networks they are used to; their friends become surrogate families during term time. But their friends can’t offer that crucial support if they don’t know how to, and that’s part of what Reclaim is about.

University also brings new experiences. Countless studies have shown that use of drugs and/or alcohol can exacerbate mental illnesses, and we must be frank: university life can bring unprecedented access to both of these things. Even if you choose to give these things a wide berth, there is still the stress of moving to a new city, learning at a faster pace and with less direct support, doing your own laundry, cooking and cleaning, meeting new people and having to find new friends, and all the other things that come with starting university.

Whilst it would be dangerous to assume a causal link between these statistics and any presence of mental illness in the Jewish student population, the figures do show that Jewish students feel disproportionately stressed, concerned or worried when compared to the general student population; these students need to know that they can ask for help if they need it and they need to know that their friends will be there for them.

Reclaim is also unique in that it is student-led. There is certainly a place for the amazing work that is done by Students’ Unions, universities and charities around mental health, but Reclaim is grassroots, putting the students in control.

So much of UJS’ work is about peer leadership, but when it comes to mental illness there is a special resonance. Many mental illnesses take control away from the sufferer, from their thoughts to their behaviour, affecting their ability to study, maintain friendships or even complete day-to-day activities like supermarket shopping. Reclaim literally empowers the students to reclaim the conversation about their mental health. Instead of being talked to by their Students’ Unions or universities, Reclaim provides a platform for student voices with campus speaker nights and online blogs and vlogs.

Reclaim does not set out to treat Jewish students who are suffering from mental illness, because UJS are not mental health practioners. But we have heard students calling out for a mental health campaign that focuses on their real experiences on campus and thanks to their input, we know that Reclaim will make a difference.

This is a campaign built by and for the students themselves; we were anxious to ensure that it really reflected the experiences we were being told about and that it offers what students are asking for. By listening to what Jewish students have to say on mental health, and not basing anything on our own prejudices or presumptions, we have built a campaign that does what the students want it to do.

Through campus-based events, the campaign will create spaces that enable people to speak up if they want to, and importantly, they will be able to ask questions – cliché as it is, there are no silly questions, and allowing people to ask the most basic ones means that they will not feel out of their depth when it comes to supporting a friend.

Online, showcasing blogs and vlogs from Jewish students will highlight stories of those who have chosen to speak up about their mental health and inspire others who might be searching for the courage to voice their experiences.

Through signposting to support services, Reclaim will also be able to help those who may know that they need to ask for help, but aren’t sure where to look or who to ask.

And most importantly, Reclaim will show those who are suffering with mental illness that as students and as members of the Jewish community, they are not alone.

[1]Home and away: Jewish journeys towards independence, p. 29.