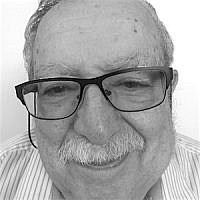 The Blogs
Jim Lederman
Apply for a Blog
Advertisement
Please note that the posts on The Blogs are contributed by third parties. The opinions, facts and any media content in them are presented solely by the authors, and neither The Times of Israel nor its partners assume any responsibility for them. Please contact us in case of abuse. In case of abuse,
Report this post.

I have been waiting for it for months, years, even decades. All I want is for a politician, an academic, a journalist, a diplomat or a member of the punditocracy to volunteer why the organizers of events such as Trumpmania, Brexit, and the mass international recruitment of jihadists in Western countries have succeeded so well, while their opponents have only been able to stand by, gaping in ignominious impotence at the so-called “surprise” taking place before our eyes?

Israeli officials, by the way, exhibit the same sort of reaction when they are forced to acknowledge the successes of anti-Zionist campaigners.

Virtually all these sorts of commentators, explainers and apologists eventually and invariably rationalize, post facto, that these kinds of events were the product of macro processes that had been underway for some time. The question that then arises, though, is: If these massive, publicly-visible processes had been proceeding apace for such a long time, and their causes are so easily explainable today, why did these writers and speakers not predict these events well in advance?

Cases such as these are not new. The modern history of Egypt provides a particularly illuminating example of this intellectual failure. Egypt is arguably the most-studied Arab country in Israeli and Western academe. Cairo is home to a large compliment of foreign journalists and a huge corps of Western diplomats. And anybody who is a “somebody” eventually traipses through the Land of the Nile.

Yet who is on record as having predicted, well in advance, that the masses would come out in support of Gamal Abdul Nasser after he had lost the Sinai to the Israelis in such a humiliating fashion in 1967, or that Anwar Sadat would regain those lost lands by making peace with the Israelis, or that that peace agreement would survive Menachem Begin’s imposition of Israeli law on the Golan, or, more recently, that Mohammed Morsi would become President following a free election…or any number of other events in between?

The reason is really quite simple. Almost invariably, those who have written the most about these events, in both authoritarian and democratic countries, have been the least capable of really explaining them and their micro-event predecessors. Unlike the Trumpists, the Brexitists, the jihadists, or Nasser’s supporters, the always-on-call, post-facto explainers do not have any career incentive to leave their desks and go out into the field—into places outside the cosmopolitan centres—to find out what is actually happening in the world.

It then becomes eminently understandable why these same politicians, academics, journalists, diplomats and pundits, who have a cartel-like domination over the op-eds and the television talkfests, refuse to even acknowledge that their failure to leave their comfort zones is an issue.

Academics are lauded and promoted for inventing mathematically-supported theories and for producing eye candy in the form of charts and graphs… not for sitting hour after boring hour gaining the trust of strangers who may have seemingly peculiar, perplexing, or even repellant opinions. The thing is, though, this is the only way that these same self-perceived “experts” can, (although only may) hear the answer to questions they didn’t know enough to ask.

Pollsters are usually even worse. Too often, they fashion their questions and come to conclusions without checking whether their questions are truly relevant and predictive of important future events.

Journalists have no time to listen anymore. They are under increasing commercial pressure to shorten their “turn-around times” (the time from when they begin to run up expenses until their completed stories are published or broadcast).

Diplomats are mandated to talk to a country’s elites, not the hoi polloi.

Pundits are expected to be entertaining. Researchers such as Phillip Tetlock have found that most popular public intellectual “experts” are actually as accurate at foretelling events as a chimpanzee who is given yes-no buttons to play with.

And politicians usually rely on the often unfounded opinions of all the above for their inputs before deciding anything.

It was not always so. In the recent past, in democratic, Western societies, many individuals did act as institutionalized communications pipelines for those without access to power. They included the often-scorned local ward heeler as well as politically-well-connected town councilors who were publicly unknown outside their bailiwick, union branch heads, local newspaper editors, and neighborhood pastors. Today, though, those roles have been reduced in size and effectiveness; and, like the local snifim of Israel’s main political parties, have sometimes been eliminated.

Ward heelers and town councilors, who kept meticulous card files on everyone they had helped, who glad-handed folks following Sunday services and who initiated phone calls to constituents to ask about their welfare and to wish their grandchild a happy birthday, now spend an inordinate amount of time posting tweets and courting wealthy donors instead. Unions have been weakened. And small-town newspapers are shrinking their coverage and closing at a rapid rate.

Contrary to what many believe, social media cannot fill the gap. A Facebook post cannot contain the heavy messaging immediately discernible in a facial expression or in a tone of voice. And that large portion of the population that is inarticulate and/or functionally illiterate don’t post anyway.

A vacuum has been created.

I have yet to see an academic article or a diplomat’s report on globalization that has used the excruciatingly precise language necessary in order to convey an individual’s pain and the psychological dislocation that comes with the loss of a job or some other personal tragedy. To do so would mean violating peer-reviewed codes of behavior and profaning career-enhancing writing formats.

This wholesale absence of carefully-communicated, establishment-originated empathy provides an almost ideal breeding environment for a Trumpist campaigner in the United States, for a Brexist advocate in the United Kingdom and for a jihadist recruiter in Belgium or France. He or she need only articulate an emotion for the tongue-tied, or show anger on behalf of those suffering deep, embarrassing grief, for the frustrated masses to subsequently trust and support even the most preposterous suggested-remedy for their anguish that the open-eared demagogue may suggest.

Put simply, demagogues today have free rein because there usually is no knowledgeable and effective competitor, in situ, to hear, to listen, to nod at the right times and to offer an alternately-pitched voice and a different recipe for comforting tormented souls.

About the Author
Jim Lederman has been the longest-serving foreign correspondent in Israel. Over almost 50 years, among other positions, he has been the Jerusalem Correspondent for the CBC, NPR and The New York Post. Among his many works is Battle-Lines: The American Media and the Intifada (Holt 1992).
Related Topics
Related Posts
Comments