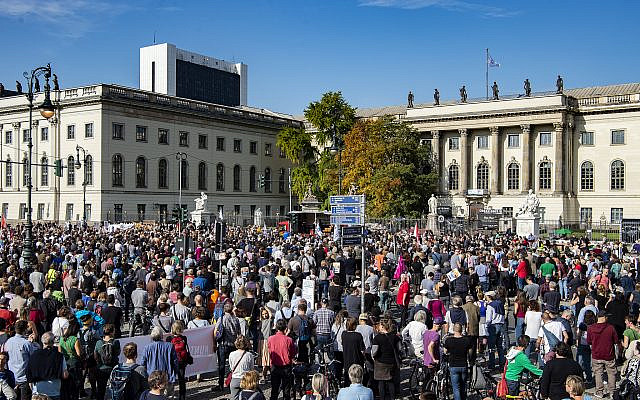 Thousands of people protest on Sunday, Oct. 13, 2019 in Berlin, Germany, against rising anti-Semitism, days after a man attacked a synagogue. (Paul Zinken/dpa via AP)

The same week my husband and I and ourr kids spent our vacation with all kinds of family in South Florida, three people I know lost members of their immediate family – two their mothers and one her spouse. While we shared meals and lit Hanukkah candles, they were in shock and having to make funeral arrangements. Knowing that each of us lives with a clock ticking down the minutes means that I relish every opportunity to spend with relatives near and far. (In fact, I’ve been working with my parents this past year to preserve their memories of family history; we’ve wrapped up the year of questions and answers and now I face three months of editing. If you’re interested in learning more, see the end note below.) Inevitable loss means, as I wrote in October when I sadly marked my late friend Judy’s birthday, “…for each day we do have, we must be grateful. We must make each day count. And we must take the time daily to let those we love know just how much they mean to us.”

Showing appreciation is vital, but so is valuing the connection to history before those that bear witness to it are themselves forgotten. This is true on a personal level as much as it is when it comes to our people’s history. That’s also why the uptick in frequency of attacks on the Jewish community in the United States (and globally) is relevant. A lot of the noise I hear on social media is trying to swing these hatreds around a contemporary axis. If these hate crimes aren’t from white supremacists, the mistaken thought process goes, then they have to be from an opposite pole, and that is wrong. Nothing in life is binary. Antisemitism is the world’s oldest hatred, and as any article in Wikipedia’s noteworthy series on anti-Semitism shows, anti-Semitic tropes are sadly rich in their variety. While in the shadow of the Holocaust such Jew-hatred might’ve been repressed, it doesn’t mean it ever went away. I believe that if the NYPD or New York’s recently formed Office for the Prevention of Hate Crimes were to release information about the nature of each hate crime directed against Jews, we would see a plethora of reasons given and a variety of perpetrators. These offices’ silence provides a space for harmful rhetoric to bubble up and further divide marginalized groups that ought to be trying to understand each other. Politicians are as unhelpful as those spouting opinions in the media.

JTA Opinion Editor Laura Adkins assembled data she could piece together after a FOIA request months ago was finally answered, but this information is terribly incomplete. Where is the pressure on the authorities in New York to be transparent and show the public accumulated data?

In the absence of data pointing to the roots of this hate, there is either ill-advised or misplaced blame – or there is silence. Why can’t Americans simply show concern about fellow Jewish citizens without trying to politicize assumptions about where the hate is coming from (because as Jews truly know, hate will come from all directions)? Some attribute the silence to the fact that hate not coming from white supremacists doesn’t fit the liberal agenda. Others discount the fact that it is Hasidic Jews who are being attacked as if their way of life plays a factor. Still others are placing blame along racist lines and pitching this as a Black-Jewish issue. All of these are wrong and all of them are a sad excuse for not simply showing up. Why can we not have in America what we have seen in France, England and Germany – that is, more than a handful of non-Jews taking a position against anti-Semitism and loudly proclaiming they stand with Jews?

I see the disturbing focus on whom to be against and not on whom to support as something repeated in history over and over. Persecution, genocide, slavery, war are all expressions of one group trying dominate over another, not because they are advancing a cause for something, but instead directing energy against others. It never ends well. In an earlier blog, I suggested that perhaps it is time to change how we teach history so that these lessons can be learned.

Yesterday, one of my sons and I had a discussion about hate crimes and terrorism. I tried to make the distinction between acts which target against a demographic and acts which support a cause – the motivations are different. In an odd way, isn’t that what is at play here too, albeit in reverse? In trying to categorize the perpetrators (without any data to draw conclusions), those up in arms are focusing on whom to be against instead of directing their energy to proclaim solidarity with and support for Jewish victims.

We in the Jewish community need our fellow Americans to simply stand up for us now. Who will do that? Who will come up with the hashtag, organize the rallies, show us we are not alone? Who will learn from history?

Shameless plug: The wonderful (and inexpensive) service I used for my parents’ story sends out weekly questions which they answer (and they can attach photos) via email (or can do verbally, but then transcription is required). I can edit and we can review before it goes to print. At the end, we get a book for each storyteller. It is a wonderful way to capture family history. Here is my referral link, if you are interested in doing this with your loved ones – it will give you $10 off and will get me a free copy of the book. 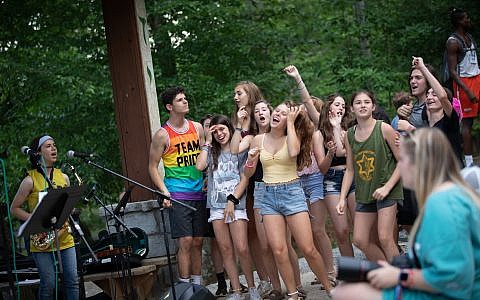 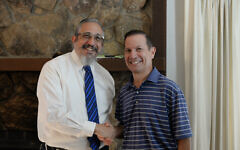 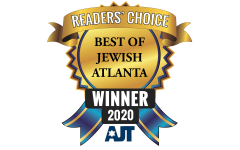 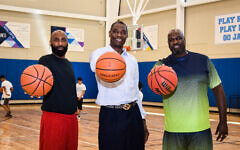 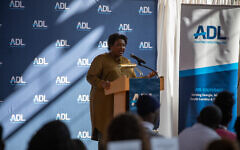 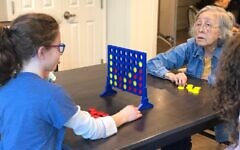 Repairing The World On MLK Day