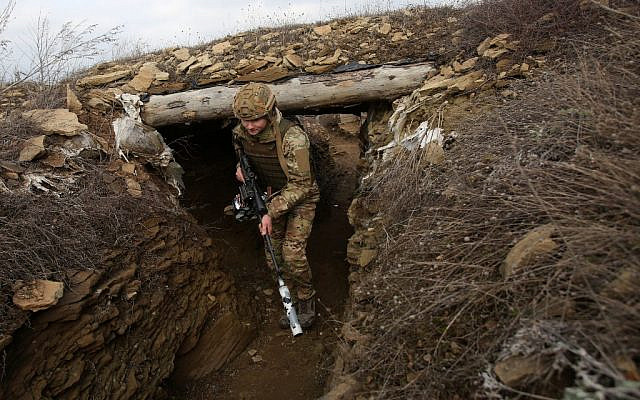 A Ukrainian serviceman walks along a trench at a position on the front line with Russia-backed separatists near the settlement of Troitske in the Lugansk region on February 22, 2022. (Anatolii STEPANOV / AFP)

Here, I’m sitting at the local café, wondering if I should have my cappuccino extra strong.

There, the Ukrainians are hearing a speech that boldly, unabashedly, declares Ukraine’s lands as Russia’s — and by so-called right!

Here, I’m walking through the peaceful streets, enjoying the weather.

What an enormous distance! And it is not the sort of distance one can measure in anything as easily bridgeable as miles; no — in this case, emotion and experience form the gap.

And yet, despite this distance, those marching feet and shameless words — they echo here, within us. They spell a war that is not merely about this specific border or that particular plot of land. They stand to change our own story, our own trajectory, whether we can hear them now or not.

“Never again,” we said, a million times — we said it and we meant it, too. But before there were the death camps, there was an international convention in Munich, and a different brazen leader spoke of the abuse of national minorities and of historical injustice and of all all those other things that Putin uses now to dress up his variation on this old song and dance where might-makes-right-but-doesn’t-just-say-so, and others wanted Peace For Our Time and Stability! Oh, we must have Stability in Europe! And between them all, Czechoslovakia was politely negotiated into shreds.

What do our promises mean, if we watch this same old story happen, and sip our coffee, and say nothing, because hey, after all, Ukraine is really, really far away?

“Progress,” we declared, over and over again — speaking of our various struggles (for human rights, for enlightenment, for equality, for justice), of the march of history, of the era our liberal values have brought forth. But what is this progress worth, exactly, if we watch a bully reenact that same old might-makes-right human drama, and go on walking in our peaceful streets, unbothered. Because hey, Ukraine is really very far away.

Now, I must admit: Ukraine IS far away, in terms of both experience and geography. Neither is it a place that I, as a Jew whose ancestors lie dead in its pits, felled by Nazi bullets with Ukrainian aid, can contemplate without ambivalence.

But I care, nevertheless, regardless of Ukraine’s dark past, because I am more concerned right now with the dark past of imperial tyrants — and with a future that might be as dark. We are watching Putin effectively declare that the old world of empire building is alive and well and on the rise. This is a world I cannot accept silently, not when it is washing over areas that worked hard and long to outgrow it, to make something new.

My dismay, I must emphasize, goes beyond ideals, beyond our old promises of “never again” and all out talk of progress. It goes all the way to practicalities: history taught us that tyrants do not stop with one act of conquest, and the world they build is an ugly one — one where, for example, other states must hide their values to survive, where Jews must pander to the tsar to save their skins, where the tyrant’s allies (and here we’re getting to our own regional enemies!) are empowered. This is not a world I want to see ascendant.

I look to my leaders, and they are, almost to a man, too nervous to protest. They cannot risk the Jews of Russia, people whisper. They cannot step beyond some diplomatic lines. I might have hoped for more from those whose state carries, in its Jewish origins, the spirit of the Hebrew Bible — of a God who brought down tyrants, who said — you shall not prosper, if you forget what Egypt was, before.

But I understand. Power comes with politics and politics come with less independence than I, for example, have when I express myself. Before our leaders can speak up for justice, they must speak for the interests of their citizenry. And sometimes, such interests bid them to keep still. Nor do I know any better, for all my horror, how to translate what I see, what I feel, into action. All I can do is put down my coffee, ignore the apparent distance between my streets and the streets of Kiev, and then… watch.

Maybe, if enough of us we keep our eyes open, and keep the world’s leaders accountable, and call them out if all their talk of sanctions and condemnation will dwindle down to de facto acceptance, we can stop history from taking the same old, depressing path. Maybe we can give substance, just a little, to all our talk of stopping tyrants and advancing history. Maybe we can live up to the best within us, just a bit.

My open eyes are all I have to offer at this moment. It isn’t much, but at least I’ll keep them open wide.

Ukraine is very far from Jerusalem today. But I will force myself to look beyond this distance. Both our future and our mettle, as members of humanity, stand, now, on the line.