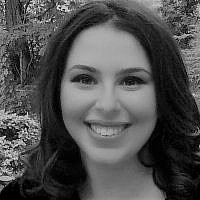 The Blogs
Rachel Margolin
Apply for a Blog
Please note that the posts on The Blogs are contributed by third parties. The opinions, facts and any media content in them are presented solely by the authors, and neither The Times of Israel nor its partners assume any responsibility for them. Please contact us in case of abuse. In case of abuse,
Report this post.

There I was, at the seder with my parents last year. Only a few weeks prior, I had given my notice at SAR High School (in Riverdale, NY), telling them that despite how happy I was, I would be making aliyah that summer. In the next few days, I had my appointment to get my apostille for my aliyah application. And with Pesach vacation stretched before me, I was plotting how to use the time to finish my Nefesh B’Nefesh paperwork. With aliyah on my mind, as I sat there at the seder, and found myself giving a little speech. I rambled on and on about how excited I was to take this step, and how grateful I was to be with my family now given that, with my impending aliyah that summer, we would not be able to spend every holiday together going forward. As I finished, there were tears aplenty, even from my usually stoic father, and then deep conversation, and introspection culminating in truly one of our all-time best family sedarim.

It’s weird reflecting on that speech now because, as much as I said those words, I did not anticipate them coming to fruition just one Pesach later. No, my ticket was booked. Long belabored plans were made for me to spend Pesach with my family again, this time with my new nephew in tow, in New York. And then the unthinkable happened, an unprecedented virus shut down the world and here I am planning Pesach in Israel alone.

When it became clear that COVID-19 would mean that our Pesach plans were up in the air, my parents were ready and willing to welcome me back to New York indefinitely. I nearly booked a flight home more times than I count but in the end, I chose to stay.

There were many intellectual reasons to stay here. Initially, the idea of facing a two-week quarantine upon my return to Israel seemed daunting and unappealing. As the situation worsened, Israel seemed to have more of a handle on the virus with more regulations and preventative measures in place. Plane travel would expose me to many people and increase my risk of getting it. But I would be lying if I said that was why I stayed.

In the wake of Corona, I realized how privileged I was to have made aliyah when I did. The modern luxuries and conveniences we have today cover up the magnanimity of the choice to make aliyah. Whereas, Avraham’s journey to Israel inevitably meant that he had to leave his birthplace, his country, and his father’s home, with Facetime and relatively affordable and fast plane travel, it sometimes felt like I barely left and made any sacrifices in the process.

Now for the first time, I felt my choice to be in Israel bore any real weight. Going to New York, with the strong possibility of being stuck there for weeks, maybe months would mean losing all the progress I had made in building a life here with my new friends, my job, and my community. Even more so, I would be setting a precedent that at every hardship I encountered, I would just go back to the familiar and comfortable life I had in the US. I would eternally be keeping one foot planted in Israel and one in New York, just in case.

By no means was this an easy choice. Even now, I think of the upcoming chag with a certain amount of dread. I do not think this year’s seder will be making it into the coterie of all-time great sedarim. I don’t anticipate this being the most fun, the most lively, or most stimulating Pesach. But I can conceive of a future next year when I will not have to be alone.

Thousands of years ago, Pesach for the Jews marked the first steps towards coming home. So this year, I will trade the promise of fun, comfort, and family there for the promise that in staying here, I can move their journey even more forward. Chag Kasher V’Sameach!

About the Author
Rachel Margolin taught Tanakh and Talmud at SAR High School for the last six years, in addition to giving lectures throughout the tri-state area. She made aliyah this past summer and is now working at Pardes as an administrative coordinator for PCJE team.
Related Topics
Related Posts
Comments