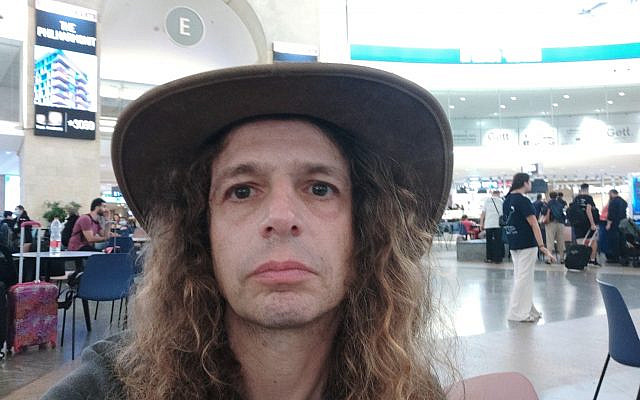 Me at Ben Gurion Airport, August 2022

I am an Israeli citizen by birth. I was born to Israeli parents in Israel. The state’s citizenship law has granted me citizenship. It was not a gift but an almost inevitable outcome of common sense.

I would not have bothered with these mundane details, unless – when I was about to fly for my last excursion that coincided with the Breaking Dawn operation in Gaza – I came across national PR volunteers at Ben-Gurion international airport urging me to promote “a positive image” of the country. When abroad, the volunteers whose affiliation remains a mystery since they did not disclose it (maybe they were merely civil servants?), did their best in order to convince me to act like an ambassador, put aside internal conflicts and disagreements and defend the destruction of Gaza; don’t wash Israeli dirty laundry in public overseas – the volunteers pledged.

Ambassador? Good to know that I received a nomination for which I have never applied. Sadly, the position came not only without application but also without any paycheck. Can this be just an airport gimmick? Perhaps, but even if it is so – it still indicates something quite profound about a state that does not regard its citizens as stock holders who have the upper hand in board meetings but as soldiers recruited for a lifetime a-la –Eritrea, conscripts that can be called for active service at any given moment.

It goes without saying that Israelis are obliged to speak in favor of their country abroad and unequivocally defend decisions and actions that are actually quite in conflict. It is impossible to imagine such mindset in normal western democracies. Let’s take the USA as an example. During the Vietnam War, plenty of renowned Americans (including Oscar laureate Jane Fonda and most famous pediatrician of the time Benjamin Spock) loudly condemned American foreign policy and even identified with the Viet Cong which was the nation’s enemy. When we examine the UK – it is not difficult to recall that at the time of the Falklands War, nearly all the famous musicians of the era – from Elvis Costello to Roger Waters – protested against their country in and outside of its borders.

Israelis, however, are expected to praise their country overseas, as if massive air raids of civilian population, occupation of Palestinian territories, and construction of Jewish settlements on Arab land are in complete consensus. I am not a pro-bono ambassador of Israel – certainly not in the current state of affairs but even if the country radically changes its approach I will still be reluctant to sing hymns only because I live here, just like I do not rush to recommend a supermarket without remuneration only because I happen to shop there.

About the Author
Amir Hetsroni was a faculty member at Ariel University in the West Bank. He is emigrating from Israel in order to miss the next war, earn higher wages, enjoy cooler summers, and obtain a living package that is cost-effective. He has three passports and does not feel particularly worried about anti-Semitism.
Related Topics
Related Posts