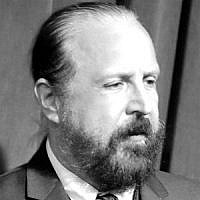 The Blogs
Lorcan Otway
Apply for a Blog
Please note that the posts on The Blogs are contributed by third parties. The opinions, facts and any media content in them are presented solely by the authors, and neither The Times of Israel nor its partners assume any responsibility for them. Please contact us in case of abuse. In case of abuse,
Report this post.

This week, I have been challenged again and again to state that I support free speech in public accommodations, such as the theater I built with my father and where I have worked for 52 years now. At times, this is a deep challenge to core parts of my being. I should begin with an introduction to the individuals and the issues.

I was raised, spiritually, in my Anglo-Irish father’s faith, as a Quaker. As my friend Simon says in his excellent piece on the controversy that I will present here, my maternal grandmother was Jewish and my maternal grandfather was Romany. So, even raised with some cultural distance, not raised in the Jewish faith, or completely under Romaniya — the spiritual traditions of Romany people, deep in my being, I grew up with that knowledge that, in much of Europe in the Nazi era, had I been there, for reasons of my ethnicity, I would not be here.

I grew up in a Ukrainian neighborhood with Nazi neighbors from whom I was the target of open anti-Semitism, to the point of a neighbor telling me that Hitler should have killed my mother and me.

I was approached to rent theater space to Gilad Atzmon, with whom I have a great number of deep felt disagreements on his observations of the reasons behind the Nazi genocide. I asked him if there was to be a question and answer period, and he said yes. I also asked, though I do not censor for content, will there be a panel that will present other points of view besides his? I said that this was not a deal-maker or breaker, but I feel more comfortable when there is potential for dialogue on issues where there is deeply felt difference. He assured me that the panel would include people who did not agree with him. And so, I accepted that he would book with us. At the same time, I said, and I continue to say, this booking is not an expression of my endorsement of his point of view, but a statement of my family’s belief in free expression and dialogue when offered.

My stand in this was challenged by Simon Hardy Butler, and I encourage anyone who has not so done, to read his piece on my decision. One of the joys of this difficult controversy was beginning to get to know Simon, whom I consider to be a new friend…even when we do not agree. We remain in process and remain on the journey of dialogue. He has listened to me, and I to him, and that is always good.

I appreciate the degree to which Simon has presented my views in context. Let me only add this. We have two ways people speak from my stage. They come to me and hire the theater and pay, or I invite them and they do not.

Most of the time, but not always, when people are invited, I agree with them, to some degree or agree that they should be heard. For example, Bill Weinberg told me that I should not have had a group come to my theater and say that the US government blew up the World Trade Center. I agree with Bill — that it is not a rational contention that the government blew up the buildings. However,  I did not agree with Bill that I should not let someone say that from my stage. And so, I invited Bill, on my dime, to organize an evening to counter speech with speech. He chose not to do so. Today, Bill feels I should not allow Gilad Atzmon to speak from my stage, in spite of the fact that Gilad invites questions and has opposing points of view on the panel with him — all of which he has organized and for which he is paying.

On my father’s side, we have a long history of challenging power with speech. In 1682, my kinsman risked his life by penning and presenting the pre-Jacobin play Venice Preservd. It attacked both the royal status quo and the revolutionaries. My father’s books were called anti-Christian and he was called a “Red” during the McCarthy era. His books were pulled from some libraries and burned and he was not seated at restaurants on occasion. His response was to keep writing.

A standard of free speech is not needed for common speech, just as defendants’ rights are not needed for those who are innocent only. Among these blogs is a thoughtful and eloquent response to one of Gilad’s talks by a law student, Marcell Horvath. He wrote it because he was able to hear Gilad in a forum that treasures freedom of speech.

When I set out to go to law school, my grade guide told me that he could not defend the guilty, and that is why he did not go to law school. I told him that my Jewish and Romany kinsmen were killed during the Holocaust, the Poremous, and, at the time, there was a drive to charge Valarian Trifa with the genocide against my kin. I said that I would defend him if I was asked. I would to honor the innocence of those of my blood that he killed. I would because the evil he did transcended the simple matter of power — he was in power, he could deny justice, and those who opposed him were now in power and could do the same. The greatest proof of their innocence would be to grant him the defense he denied others. I felt it was an obligation to provide him civil law.

Let me be clear. If Gilad were to stand on my stage and pronounce speech which violated the standard in the Metzger case, call for violence against those who disagree with him, as we saw shockingly in the most recent presidential elections, I would have him pulled from the stage. But he has not. Without civil discourse, there can be no progress towards understanding and it is the progress towards understanding that protects us from the rise of fascism we see in so much of the world today.

There are those who call for picket and protest. That is your right, but rights also call for individual discretion. If we did not provide you a forum, if it was the policy of this theater to censor your speech instead of Gilad’s, I would say it is time for protest. But, when there is a free and open exchange of ideas, my own belief is that one makes a greater point, the way Mr. Horvath did, answering speech with speech, foolishness with reason.

I wish to thank the Times of Israel for asking me to respond, and allowing me the hospitality of this forum. Best wishes and peace to all,