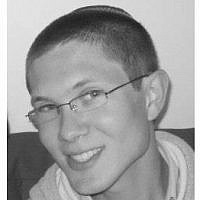 The Blogs
Yedidya Kennard
Apply for a Blog
Advertisement
Please note that the posts on The Blogs are contributed by third parties. The opinions, facts and any media content in them are presented solely by the authors, and neither The Times of Israel nor its partners assume any responsibility for them. Please contact us in case of abuse. In case of abuse,
Report this post.

In January 2013, I voted Yesh Atid. They burst on the scene as a party heralding a new type of politics. They were made up of new faces, a clean slate of truly committed public servants, each with their own rich background of dedicated service. A unique list made up of religious and secular, from the North, South and Centre, old and young, Sabras, Russians, Ethiopians and Anglos, all coming together with the common goal of making Israel a better place.

They were a party with a clear vision and a clear message. At the time, one of the things that struck me was that unlike most other parties, they had a detailed manifesto laying out their top promises, the issues that they would focus on first given the chance. Contrary to what some said, these were not empty slogans, but true, clear, detailed plans. The five main goals they published were:

In January 2013, I and over half a million other Israelis voted for change. We voted for ‘new politics’ – where results, not slogans, are what matters. And results are exactly what we got.

In the short 20 months since then, Yesh Atid and their MKs and ministers have made huge progress along the way to true and lasting change in Israel. In fact, their biggest failure has been to not publicise just how much they’ve done.

Starting with the cards stacked against them, needing to fill a 40 billion shekel hole in the precious budget, Yesh Atid have brought Israel’s economy to the stage where we could fight a war over the summer with no tax rises to pay for it. Food prices in Israel have dropped by over 3% in the last year – when in the rest of the OECD they have risen by 2.4%. Yesh Atid’s law on the equality of service passed – and has already led to thousands of Haredim joining the workforce. For small businesses, Yesh Atid has helped pass laws that allow them to pay VAT only on what they have actually received, not on all that is owed to them as was the case. The loan fund for small businesses has doubled.

In education, where the government was led by Yesh Atid minister Rabbi Shai Piron,  the framework is now in place for all schools of all sectors to be required to teach core curricula. Tens of schools have opened this year in a new government-Haredi track where basic general studies are taught. Five new technological schools have opened. There are 1,200 new pre-school assistants. Construction has started on 400 new day care centres. Over the summer, 200,000 first and second graders took part in Ministry of Education programs, saving parents thousands of shekels. 200,000 children from poor families got hot meals in schools – a doubling of the previous program.

In welfare, under Yesh Atid minister Meir Cohen, an extra billion shekel was used to help Holocaust survivors, helping with free medicine, benefits, annual grants and in reforming the bureaucracy. New help is now given to women in domestic violence shelters. In the promised changes to government, the next cabinet will be reduced to the promised 18 ministers by law. The ‘minister without portfolio’ has been abolished.

Yesh Atid also helped to make life easier for olim. For example, they ended the policy of requiring drivers transferring a foreign license to take a theory test after failing two tests, a change that will help many especially elderly immigrants. They also changed the laws that stopped immigrants from taking nursing tests until after aliya, allowing new olim to take the tests before committing.

To be honest, this list could go on for a while longer. But for me, the above was enough to persuade me that I had made the right decision back in January last year. However, what convinced me to support them again this coming March is the budget prepared by Yesh Atid which was due to be passed in the Knesset now has it not been delayed by these pointless elections. When Netanyahu made the decision to dissolve his coalition and call a vote, he was throwing out a budget that could have funded building 150,000 new housing units for rent. That would have increased support to 190,000 needy pensioners. That would have implemented the Education Ministry’s special committee report on reducing classroom overcrowding. That would have provided for another 1,100 police and fire fighters. That would have added 4 billion to the health budget. That would have extended the summer program project to 400,000 children up to fourth grades next summer. All of that with no new taxes, and 6 billion shekels extra for defence.

All of that is ready to go, budgeted for, planned for and negotiated for with the professional levels in each ministry. All of that is now on hold thanks to Netanyahu’s petty political games. But it can all be back on track come March 18th.

Last year, I voted Yesh Atid full of hope for the future. This year I will vote for them because they deliver.

About the Author
Yedidya Kennard made aliya from the UK in 2006, and now lives in Givat Shmuel.
Related Topics
Related Posts
Comments