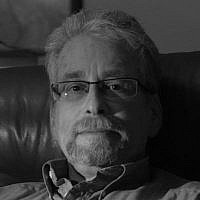 The Blogs
Bob Fenton
Apply for a Blog
Advertisement
Please note that the posts on The Blogs are contributed by third parties. The opinions, facts and any media content in them are presented solely by the authors, and neither The Times of Israel nor its partners assume any responsibility for them. Please contact us in case of abuse. In case of abuse,
Report this post.

Israel has been my home for over 40 years and I have two sons and a grandson born in the country. I came here out of choice, and a belief that the Jewish people have a right to live here and can build a country that is a light unto nations.

In my time here I have lived through numerous wars and two Intifadas however the biggest threat to Israel, and its ability to be “a light unto to nations”, is how it treats the minority in the country which make up slightly over 20% of its citizens. In one of my meetings with Jerusalem’s Mayor Teddy Kollek, he quoted Mahatma Gandi saying, “the greatness of a nation can be judged by how it treats its weakest members.” Mayor Kollek’s approach in Jerusalem was governed by pragmatism.

Past Israeli governments have failed in this test as unemployment, poverty and discrimination is most prevalent among Israel’s Arab Palestinian population. The Institute for National Security Studies at Tel Aviv University states that among the internal threats to Israel’s security, the tension between the Jewish majority and the Arab minority represents an important danger, but also reflects a vital opportunity for the future of Israeli society.

The Israeli government that was formed last year was the most inclusive government Israel has ever had. Among others it included Bennett from Yemina an Israeli political alliance of right-wing parties, Lapid from the non-(if not anti) religious centrist right, the Labor Party, the left-wing Meretz Party and Ra’am an Islamic Arab Party. As well as being the most inclusive government Israel has ever had, it was the first time in Israel’s 73 years that it had a religious prime minister and an Arab political party as part of the government.  The willingness of the  Ra’am Party, under the leadership of Mansour Abbas to join the government is what allowed it to form.

With the establishment of the past government the Israeli Palestinian conflict underwent a geopolitical earthquake as during its tenure Mansour Abbas recognized Israel as a Jewish State calling for fellow Israeli Arabs to recognize it as such; another first. The Ra’am Party is the political wing of the southern branch of the Islamic Movement in Israel. It supports a two-state solution with the creation of a Palestinian State in the West Bank and Gaza Strip, with East Jerusalem as its capital.

Mansour Abbas and the Ra’am political party reflect a new pragmatic approach to Israeli society and politics that began to emerge from this government.

In the last election Ra’am broke from the Joint List of Arab Parties, secured 4 Knesset seats and was the kingpin in forming the government. There demands to join the government were simple:

Ra’am advocates the recognition of Israeli Arabs as a national minority and seeks to ensure their rights in a constitution. It calls for closing the gaps in the Arab educational system and supports both the establishment of an Arab university and the development of industrial zones near Arab communities. As an advocate for traditional Islamic values, and this may be the hardest piece for me to accept, the party has come out strongly against LGBTQIA rights, although unlike Jewish ultra-orthodox parties Ra’am is ready to accept women into party leadership.

Israel’s Arab citizens have been the most discriminated group in the country and today face violence and crime that will soon overflow into the rest of Israeli society posing a bigger threat than Hamas and maybe even Hezbollah. Without Israeli Arab representation in the government, the gaps and discrimination will only grow.  Mansur Abbas and the Ra’am party have shown flexibility in accepting the Jewish State, recognizing the suffering of the Jewish people and being willing to participate as full members of society. Israel needs them to be full partners in the next government.

About the Author
Born in the United States I have lived in Israel for over 30 year and have been involved with NGO's working on child welfare, and Jewish-Palestinian relations. In the past I have worked at Hand in Hand Center for Jewish Arab Education developing bilingual, multinational schools, and programs where Arabs and Jews learn together and at Neve Shalom – Wahat al Salam Jewish Arab Community where Jews and Arabs live together. NSWAS operates a guest house, school, spiritual center and educational seminars. Over the years I have represented and provided research and consultation to major foundations contributing to Israeli society.
Related Topics
Related Posts