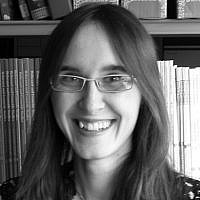 The Blogs
Katharine Crew
Apply for a Blog
Please note that the posts on The Blogs are contributed by third parties. The opinions, facts and any media content in them are presented solely by the authors, and neither The Times of Israel nor its partners assume any responsibility for them. Please contact us in case of abuse. In case of abuse,
Report this post.

For many students university provides an opportunity to meet young people outside of their own faith community for the first time. However university faith societies make it temptingly easy to only engage with others of the same faith. Hannah, a Jewish Student from LSE, pointed out that “not only does this prevent students from receiving a more authentic and rounded university experience, it serves as a risk to the progression of modern society”.

University education is not limited to that which is taught in lectures and seminars, but includes the valuable life skills that are developed alongside academic study. These include interfaith and intercultural communication skills which are necessary as students move into their careers.

Yet issues of mistrust between faith groups and the difficulty of implementing a successful interfaith programme means even those keen to engage with interfaith dialogue can find it difficult. Annabel, a Christian student from the University of Nottingham, has been concerned about the challenge of creating “successful interfaith events” which are “sensitive” to each religion.

Much has been made of university ‘no platform’ and ‘safe space’ policies with the topic of freedom of speech sparking considerable debate. Regardless of your personal opinion of the subject it is clear that such fears are unfortunately making students nervous about engaging with interfaith dialogue.

This was certainly my experience as Interfaith Coordinator for my Christian Union at a large and diverse university. Despite the high number of faith students it was hard to generate interest around interfaith due to the insular nature of many faith societies. This was only perpetuated by international conflicts which created a sense of suspicion between faith groups. Differences between faiths were exaggerated to give credence to the claim that interfaith was pointless as it could only end in angry debate. This prediction left many afraid to engage in interfaith dialogue with other faith societies.

But this prediction was wrong. Through building strong relationships with interfaith representatives from the other faith societies we were able to produce a programme of interfaith events throughout the academic year. The meaningful conversations which arose played a positive role in dismantling stereotypes and creating lasting relationships. However as a student new to interfaith and with limited time to commit there were times when it was a challenge.

My experience as a student has made me passionate about making it easier for new students to get involved with interfaith at university. This interest led me to join the Council of Christian and Jews as Campus Leadership Manager working to empower students to become interfaith leaders. In this role I ran CCJ’s first student training conference which was attended by Christian, Jewish and Muslim students from universities across the country. The conference forms part of CCJ’s Campus Leadership Scheme which appoints Student Leaders to take the lead in running interfaith events at their university.

Central to this scheme is the belief that events must be student led to truly meet the needs of their university. Consequently our conference was organised to train students with the skills required to take the lead in creating interfaith schemes and to provide an opportunity for students to collaboratively plan events to hold during Interfaith Week. We were pleased to be joined by the Union of Jewish Students who presented a seminar on antisemitism- a topic requested by students as an issue they too commonly face at university.

It was a sign of how comfortable the students felt as a group that they were able to openly discuss the sensitive issues that had been arising at universities. In the supportive atmosphere of the group students had the unique opportunity to share advice in a safe environment. Students commented that the conference gave them the “resources and knowledge to run future interfaith events”.

With universities too often being viewed as the centre of controversies around antisemitism and freedom of speech it was encouraging to work with students who are committed to building meaningful relations across faith communities on campus. We look forward to the launch of the scheme during Interfaith Week and seeing the positive impact our Student Leaders make at their universities.