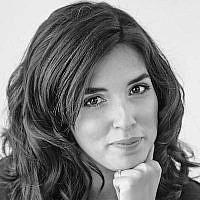 The Blogs
Myriam Shermer
Apply for a Blog
Please note that the posts on The Blogs are contributed by third parties. The opinions, facts and any media content in them are presented solely by the authors, and neither The Times of Israel nor its partners assume any responsibility for them. Please contact us in case of abuse. In case of abuse,
Report this post.

Betrayal, anger and hurt. After much speculations, leader of Yamina’s Naftali Bennett has officially announced this Sunday that his is making every effort to form a government with his “friend Yair” Lapid. That government has until tonight (Wednesday) to come to be and would rotate Bennett and Lapid at the premiership. Bennett would go first, with several other key ministries occupied by either his party members, or Gideon Saar’s right-wing New Hope. The rest of the top jobs would go to Lapid’s centrist Yesh Atid, and to left Avoda and Meretz. Each side would hold veto power over mutual decisions. That arrangement makes it a very difficult government to lead for Bennett, but not exactly, or at least not entirely, a left-wing administration.

And yet, that doesn’t stop large parts of the Right to call it exactly that, and to feel completely betrayed by Bennett’s and his close associate Ayelet Shaked’s, move. Sell-outs, they say, and threats of violence have poured in, requiring new layers of security for both of them, as well as others future members of that coalition.

This is not the first time the political tone in Israel becomes very heated, and while it’s very important to condemn threats and abuse, and take every step to ensure everyone stays safe, it’s also important to understand where does this all come from. Too often, emotional outbursts are delegitimize without being heard. That doesn’t mean making excuses for inexcusable behaviors, but that does mean trying to hear what is not necessarily being said.

According to Jonathan Haidt’s Moral Foundations Theory, Loyalty is one of the six universal moral foundations in human societies, although it is often way more important to Conservatives. Liberals, so argues Haidt, base their moral beliefs mostly on the first two foundations, namely Care and Fairness. They therefore struggle to grasp more traditional, conservative or right wing belief systems, because those will tend to include all six foundations. That means, in addition to Care and Fairness: Liberty, Authority, Loyalty and Sanctity.

Authority and Loyalty foundations explain why right-wing worldviews value sticking with one’s family, one’s country and one’s leader, over other concerns. That very easily translates while observing Israeli society, for example haredi extreme fidelity to its political leadership, or the importance of family in religious or traditional communities. That is not to say Loyalty doesn’t exist on the Secular Left, as Israelis are generally family oriented and deeply impacted by military culture, among other things. But the high turnover of leadership at the historical Avoda party, especially when compared to the Likud’s, illustrates well how loyalty to the leader is perceived differently on both political sides.

And this is where Benjamin Netanyahu’s figure comes in. To some voters on the Right, Netanyahu is somewhat royal. Divinized, sanctified, he is the father figure, the one who provides (security, international respect, vaccines) and keeps out of harm ways.

That hasn’t always been the case. Earlier in his career, he too was harshly criticized and branded a traitor by some around the Wye agreement, and the Gaza disengagement especially. But over time, his public perception has changed, and “bibism” has become not only a political slur on the Left, but also a socially observable phenomenon among some of his voters. Part of it comes from his own sense of being on a historical mission for the Jewish people (and he is, indeed, a very skilled leader in many regards). Part of it comes from the fact that Israel is a very complicated country to navigate, and studies often show that Israelis are not entirely sure how to solve dramatic issues such as terror and the conflict with Palestinians. It is then psychologically tempting to stick with one man, an impressive one at that, worldly, with commanding authority, even though one doesn’t always understands or approves of his policies (that dilema is easily distinguable in South towns, historically Likud towns, that are also in the first line of fire from Gaza, with some residents feeling let down by Netanyahu’s strategy with Hamas).

Circling back to Naftali Bennett- he is younger, jumpier, and hasn’t earned the same seniority credit that Netanyahu has, especially when he is now seen as abandoning and betraying the elder leader.

But there is more to that. Israel, and Israelis, are loaded with collective trauma. Millenials who grew up in the 1990 are shaped by at least three traumatic events that took place in their youth: the wave of terror attacks that followed the Oslo Accords (and later on, the Second Intifada) and left thousands dead, the PM Itzhak Rabin’s assassination by a fellow Jew, and the disengagement of the Gaza strip, namely the evacuation of thousands of Jewish families, crying and begging, from their homes by the IDF.

Those events, which impacted different parts of society differently, were all sudden, violent (or required the use of force) and shattering. To various degrees, they installed fear and lack of trust at the heart of very formative years for a generation who is now coming of age.

If that’s not enough, that generation (my generation) was raised by collectively traumatized parents as well. The Israeli Gen X served in the army during annihilation wars, like the Yom Kippur war. My father, as so many of his generation, lost several classmates in the combats of 1973. My mother, who is older than him, remembers the Independence War as a six years old. They themselves were born to a generation who either had to live through the Shoah, or were subjected to anti-Easterners racism and humiliation while making aliyah, or sometimes even both.

Those different traumas, present for almost everyone in different shapes and forms, have not all been equally processed in the Israeli public, collective discourse. Some are still largely repressed, unspoken of. The Shoah and Rabin’s assassination both have designed mourning days and school curriculums, as they should. But the systemic racism endured by Easterners Jews at the creation of the State- and some might add to this day, or the inevitable trauma created by the disengagement for thousands of families betrayed by the State, or the absolute helplessness and rage felt by so many Israelis in the 1990 with buses blowing up every week and their government still negotiating for peace  – all of those events have yet to be publicly acknowledged and processed. They are still hanging in the air, so to speak, denied and minimized by some, killing others on the inside, fueling the trauma in politics. Just ask some voters why they will never vote for a particular party. The answer is often that that party has betrayed them in the disengagement, or betrayed their parents sixty years ago, leaving them to rot in maabarot (tents) while the Lefties got nice appartements.

Carrier of the pain

Netanyahu is a very traumatic figure. As the brother of a fallen war hero, as the son of a respected historian who specializes in Jewish persecution, as a proud Jew when traditional and religious sentiment has long been repressed and ridiculed in Israel, as a staunch, American educated conservative in a country created on Sovietic informed Socialism, he taps into  many collective traumas of deep, life threatening fear, rejection and humiliation. Sometimes deliberately, sometimes not, he infuses his political purpose with unspoken pain and unrestored, lost dignity.

This is why when he is sued in Court for allegedly colluding with the press, like many others politicians do, his supporters feel this is akin to them being unjustly rejected, mocked, delegitimize or unheard. Part of this is because it is Netanyahu’s interest that they feel so, but part of this is because they truly have been subjected to pain that isn’t fully recognized yet.

Over the years, many press profiles have rightly point out how Netanyahu and Bennett are similar to each other. They both speak native English, had formative years in the US, they both served in the very elite Sayeret Matkal unit in the army, they are both free market men and staunch capitalists. They both are charismatic and have the same practical, concise kind of management style.

But Bennett does not seem to carry the same pain as Netanyahu’s. Bennett is a happy, often laughing chap, with a stable home life and the ability to tap on everybody’s shoulder and call them ahi (“my brother”). Bennett is very American in his optimistic, enthusiastic energy, and the safe background confidence that American Jewry has experienced in the United States, certainly when his parents were growing up. Bennett is not nearly as tragic, traumatic or stern as Netanyahu can be.

And Bennett doesn’t yet. Although he is very history aware, although his son carries the name of Netanyahu’s brother, although he thinks in Jewish historical terms and often refers to the Bible for guidance and perspective, he doesn’t embody the traumas, the unspoken pain. He might never will to that degree.

Like so many things in Israel, this, too, shall pass. It can be a harsh and repressed moment, as so many others. Or it can try to be self-reflexive and compassionate. It’s up to the leadership, and it’s up to us.

About the Author
Myriam Shermer is a journalist, lecturer, and worksops facilitator. Born in Jerusalem but raised in Paris, she has studied Cinema, Psychology, Political Science and American Jewish History. Formerly editor-in-chef of the JPost French Edition, she is a commentator on i24 news, and gives talks on Israel to Jewish students and tourists. She uses psychological concepts to analyze the news and hopes to bring more mindfulness into public conversations.
Related Topics
Related Posts
Comments