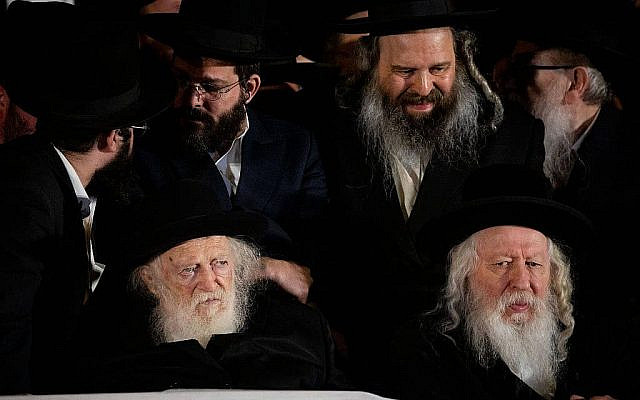 Horrendous calamities can bring clarity to things that in normal times can be fudged. The corona crisis, from the beginning but especially in its current phase, has illustrated cruelly how broken down is the Israeli state’s relationship with the Haredi minority.

The actions of some Haredim  (not all, but a significant part) illustrate their disdain for state authority, disregard for wider society, and indifference to their relationship with non-Haredim.

On Sunday, according to this site and others, hundreds of ultra-Orthodox elementary schools with tens of thousands of students opened despite government restrictions which have kept all other schools closed.

This came after the government last week caved in allowing today’s kindergarten reopening to apply everywhere, including to “red” areas almost all of which are Haredi. The  capitulation confirmed the suspicions of many commentators who predicted the government could not dare do otherwise because since the Haredim would not obey and enforcement is somehow inconceivable.

This week’s outrage, in grades 1 through 8 all over heavily infected Haredi towns and neighborhoods, reportedly occurred after Chaim Kanievsky, a top rabbi in the non-Hasidic Lithuanian community, sanctioned the violation.

I wrote on this site last week that the real issue with the Haredim goes far beyond the corona crisis, since Israel’s general acquiescence to that quarter has the country on the path to a Haredi majority within a few generations (compared to 12% today) and then economic ruin because of the resistance to general studies and insistence on lifetimes devoted to Torah study. I called for an end to the subsidies that amount to secular (and moderately religious) Israel paying for its own destruction.

Reaction ran the gamut from dismissing of the effort as  just “kvetching” to a Haredi writer who accused me of “calumny” to no few secular readers were shocked at the landscape described, though the facts are there for everyone to see. Then came this week’s events, that suggest the focus needs to be on corona after all.

When the result of this chutzpah will be another surge in Haredi infections their politicians will doubtless oppose targeted lockdowns on their communities and there will be pressure for a third nationwide lockdown. That dynamic is precisely why we are now coming out of second national lockdown, the only such in the world.

It makes the blood boil. Why is Rabbi Kanievsky not being interrogated for suspicion of sedition and endangering public safety? Why are the open schools not shut down by police? Why are not maximal fines handed out? It does not take much police manpower to hand out fines to institutions whose location is known.

The truth is that Israeli society has become accustomed to the notion that with this one particular area, nothing can be imposed. Military service cannot be imposed. A modern education that makes a person employable beyond the mikveh and the Kashrut patrol cannot be imposed. Limiting family size to what you can afford without depending on the state cannot be even discouraged by ending child subsidies – that would be “anti-Semitic.” Some confused liberals have even raised it to the level of universal principle: imposition never works.

But imposition is a pillar of the rule of law and a key tool of the nation state. It’s better to have legitimacy and consensus, of course. But at the end of the day, when needed, we impose. That is why people pay taxes they do not wish to pay. That is why Israel’s young are dragged off to the military to risk their lives, even for causes they may despise.

This is why secular (and national-religious) schools are closed today, inconveniencing many parents who would rather be free to go to work and earn money (half of which would be grabbed by the state, and of that a disproportion handed over to the Haredim).

Can anybody imagine what would happen if a leader of Meretz called for schools in Ramat Hasharon to open despite the government ban? Would it stay open for even three minutes? Would there be any difficulty finding police resources to shut it down, or any hand-wringing at all about imposition?

The impotence of the state versus the Haredim is a national disgrace. And we know very well why it is happening. In one word: Likud.

It is the Likud Party which cannot impose anything on the Haredim not because imposition doesn’t work but because the Haredi politicians have the Likud in their pockets. There has never been a majority for the right without the Haredim. This counts double when the prime minister is a criminal defendant who is scheming to call new elections which he hopes will enable him to cancel his trial. If he does win a majority this time, the Haredi politicians will be first in line to assist, in exchange for the right encouragement and despite the widely held belief that religion and morality correlate.

It’s true that the left also hesitates to upset them, hoping to one day win their support. But the left also knows the Haredim will never support it without a solid leftist majority in place, and so the degree of leverage in Haredi hands is different. A government of the left would not likely be this helpless.

For this reason I am lukewarm about the anti-Netanyahu protests. They provide an excuse for the Haredi violations by creating the impression that violations are anyway widespread. The impression is false – the protestors wear masks, are outside, and follow guidelines mostly – but the country is full of people who do not understand nuance, care nothing for democracy, and are easy prey for propaganda. The protests get in the way of clarity.

So it’s a good thing Israel has the likes of Kanievsky, who serves the cause of clarity so well.

Book burning in Jerusalem: City to set up cameras after arson at mini library
TOI staff