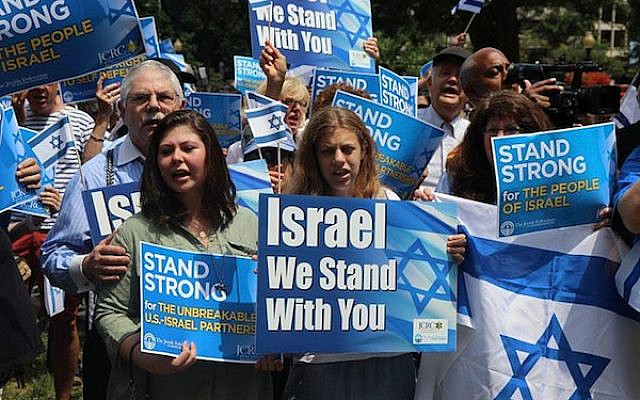 As an American-born Jew living in Israel, I find the divide between American and Israeli Jews on Israel incredibly frustrating. I believe that there is such a great divide between American and Israeli Jews when it comes to Israel because we are envisioning two different Israels. The American view of Israel is stuck in the 1990s, at the high point of the optimism of the Oslo Peace Process. Most Israelis have abandoned that vision, while American Jews overwhelmingly still support it. It seems that the few remaining Israelis who view Israel with the rose-colored optimism of the mid-90s live outside of Judea and Samaria (the West Bank). It is rare to find an Israeli within or near Judea and Samaria who views things the same way.

In today’s discussion about Israel there are two Israels. The first Israel, “Israel One” is a strong, secure and growing Israel. The second Israel, “Israel Two,” is a moral, just and equal Israel. These two Israels aren’t mutually exclusive of each other; they coexist, but Zionists in America and Israel focus on the Israel that resonates with their values.

The advocates of “Israel One” focus on Israel’s security. They will spend more time talking about the threats that Israel faces. They will advocate growing Israel’s footprint on the land of Israel, including in Judea and Samaria. They will be excited about Israel’s global influence and point to this new influence as a proof to the success of their position.

The advocates of “Israel Two” focus on Israel’s treatment of Palestinians, Israel’s Arab citizens and minorities in Israel. They want to ensure that all of Israel’s policies and actions treat all people within Israel and under Israel’s control equally, including non-citizens. For most of the “Israel Two” advocates, they see equality in Israel fulfilled by the creation of a Palestinian state and the resolution of the Israeli-Palestinian conflict coming through the two state solution.

The focus on “Israel Two” was very popular in Israel in the early 1990s. Prime Minister Rabin, of blessed memory, was pushing the Oslo Peace Process and Israelis were excited about the prospects of ending the Israeli-Palestinian conflict with a peace deal between the two peoples. Israeli and Palestinian dreams of peace were crushed when a wave of terror that eventually led to the Second Intifada hit. The overwhelming number of Israelis concluded that unless Palestinians believed in a strong and secure Israel, focusing on “Israel Two” was a waste of time.

Palestinians did not consider a secure Israel important, Israelis sensed their lack of concern and they became disillusioned by the peace process. It seems that the more exposure Israelis had to Palestinians in their daily lives, and the security threats their exposure brought, the less support the peace process received. Israelis who are not exposed to Palestinians, who never share roads with them, who don’t enter their villages, and don’t interact with them, mostly see Palestinians in the news, online or on TV. These Israelis, who don’t dare cross the “Green Line” into the “West Bank,” still focus on “Israel Two” because they do not see the security needs of the Israelis who interact with Palestinians. American Jews also rarely cross the green line, and are not aware of the security dangers regular interactions with Palestinians bring. They too focus on “Israel Two.”

American Jews and the Israeli Jews who do not have to face the security threats posed by Palestinians — not all Palestinians, but a significant enough number of Palestinians to change daily life for Israelis around them — are easily able to focus on “Israel Two.” Their lack of exposure to the violence and terror that the Israeli-Palestinian conflict brings to Israelis, allows them to focus on equality more than on security. American Jews who have seen the violence and terror first-hand focus on security first, and place equality second.

As I’ve expressed multiple times in this essay, I don’t believe there are any Zionists, American Jews, Israeli Jews, American Gentile Zionists and anyone else who loves and cares about Israel, who are not concerned about security and equality. But the divide within the group stems from where they choose to place their focus. When those who care about Israel recognize that it is two different visions of Israel that generate the divide, but also recognize that both groups care about the same values, then they can work on bridging the divide and uniting our people.