Israel’s medical services have treated more than 2,600 Syrians wounded during their country’s conflict since 2013, despite the two nations being officially at war. Last week, I took my “Write On for Israel”(WOFI) mission to the Ziv Medical Centre in Sfat. WOFI is a highly regarded two-year Israel advocacy course, sponsored by the Jewish Week of New York, aimed at preparing the participants, Jewish American high school juniors and seniors from local Jewish, public and private schools for the anti-Israel battleground of the North American college world. The culmination of the program is a weeklong mission to Israel for the seniors, where, in addition to touring, the group gets to meet key journalists, IDF officers and soldiers, and other important change makers in Israeli society, from medical doctors to high tech gurus, Jews and Arabs. The intense itinerary focuses on Israel as a modern dynamic society full of rich diversity and invites the participants to both grapple with the issues facing Israel and celebrate Israel’s achievements.   The WOFI mission complements both the Jewish identity formation and Israel education of the participants. The most impactful moment of many was our visit to the Ziv Medical Centre.

During our visit we not only heard fascinating presentation which combined both a clear concise medical summary of the treatment given with a philosophical explanation as to why Israel feels the moral obligation to help the Syrians from Dr. Michael Harare, the senior Paediatrician, and an immigrant from Australia, in charge of treating sick Syrian children, but also visited the ward where the Syrian patients are being treated. Through the interpretation of the Israeli Arab social worker, Fares, we heard from both combatants in the civil war and parents of sick children about their treatment and views of Israel. 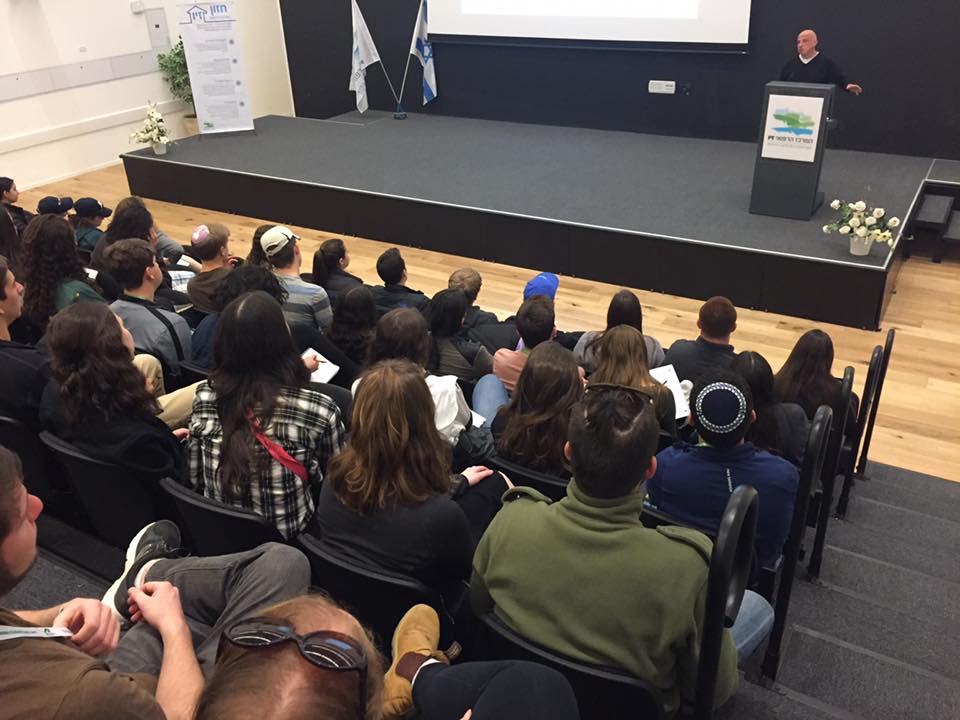 The Ziv Medical Centre is situated in Sfat about 30km from Syria and 11km from Lebanon. In addition to the local population, the Medical Centre serves IDF soldiers, UN Soldiers and Syrians. It is prepared for all sorts of emergencies, including chemical war. Its multicultural, multiethnic team serves individuals of all cultures and ethnicities. Syrians not only receive the same standard of care as Israelis, but the hospital does not discriminate and goes above and beyond what is expected.

Dr. Harare explained to our group how this hospital became involved with humanitarian aid to Syrians. Since the Syrian civil war broke out in 2011, the UN estimates that around 400,000 people have been killed and 1.6 million people injured. 70% of the medical community has fled the country, and healthcare facilities are severely compromised. There are 3.5 million external refugees and over seven million people displaced within Syria.

In February 2013, the then Strategic Affairs Minister Moshe Ya’alon decided to allow Syrians to enter Israel to receive medical treatment. The government now takes in severely wounded Syrians.  As of November 2016, there have been 720 Syrian patients at the hospital. The average duration of their stay is about 18 days.  Dr. Harare explained how the process works. Syrians come from a field hospital (Station 1) situated on the border with Syria and manned by IDF physicians and medics, which provides first aid and life saving treatment/primary triage. There, people may be discharged or transferred. Station 2 consists of civilian hospitals.   Some of the Syrians have complex, multi-system injuries as a result of blasts.  In addition, 132 children have been treated at Ziv. Most have multi-system injuries. Twelve children have lost at least one limb. Five have come without family members, whereas nine have come with their families. Many children have lost their families as a result of their proximity to the blasts and bombings.

The change in national and international awareness of what Israel was doing to help Syrians came when the Australian Ambassador to Israel, Dave Sharma, came to visit the hospital in 2013 and wrote an article about his visit. Sharma praised the Israeli government and Ziv Hospital saying:

The professionalism, dedication and compassion of the entire staff at Ziv Hospital is something to behold.  It is humanity at its best.”

The patients told us through the translator that there is not one single safe place in Dera. Nobody imagined they would be treated in Israel and all are thankful for the kindness. They are not afraid to be in Israel but are happy.  The patients have returned to Syria, for the most part. Some have been harmed upon return to Syria. Children tend to want to go back to Syria after they are treated. Because people in Syria dislike Israel, discharge letters must be written in English without the hospital letterhead.

There is a schoolroom in the paediatric ward. This is significant because Syrian children have not attended formal schools since the outbreak of the war in 2011. The children are so excited to attend school. There are two play therapists. There are computers, toys, puzzles, etc. There are also medical clowns, who play with children and are involved in the children’s medical care. They receive updates regarding children’s health and are allowed to make visits. Children leave the hospital thinking that clowns helped save them. The hospital is starting to accept children with severe chronic illnesses, such as diabetes or epilepsy.

The response from the Israeli people and local community has been overwhelmingly positive. Nobody is upset that their tax dollars are going to Syrians. Instead, they have donated prostheses, toys, etc. Many Israelis want the government to do more to help Syrians. In Israel, there was a coat drive to provide jackets to war affected Syrians. There is a utilitarian uselessness. Harare reminded our group that,

Saving one Syrian will not influence the greater Middle East. It is, however, empowering to do something and not sit at home idly.”

Farris the Israeli Arab social worker/translator is a 40-year-old Christian Arab with a wife and two children, living in Northern Israel near the Lebanese border. He worked at a plastics factory but went back to college to become a social worker. He is extremely passionate about his job. He explained how it is important to develop relationships with the Syrian patients, as the doctors cannot communicate with the patients in their own language. In addition the Syrian patients are hesitant to trust new people. Farris commented, “If you want to be seen as a human being, you have to treat [others] as human beings.” Regarding the Syrians perception of Israel Farris explained that,

Inside every patient we have changed something”

We visited a ward of adult men whom it is assumed that most are Sunni rebels because the rebels have no medical infrastructure. Damascus, the government stronghold, has some medical infrastructure. There was a 17-year-old has a bullet in the leg, a man in his twenties with a wounded knee. Another young man had a tracheotomy because he could not breathe through his mouth. They are all hopeful for victory against the Government forces and want to return to Syria. Some of them even said that refugees are cowards. They do not care whether Israeli or Jewish doctors treat them. They are grateful for the help that Israel has given them.

Finally we visited a room with a Syrian mother and baby in. The baby is seven months old and has been in Israel for a week. He has two inflamed kidneys and a distended stomach. The baby’s mother is thirty. The mother used to live in fear of Israel, having heard from the news that it was the devil. However, when she heard from the only doctor in Dera that her son would only survive if treated by Israeli doctors, she walked to the border and then proceed to walk along the border until she approached a gate and was allowed entrance to Israel. Her opinion of Israel has changed dramatically, and she is thankful for the help her son has received. 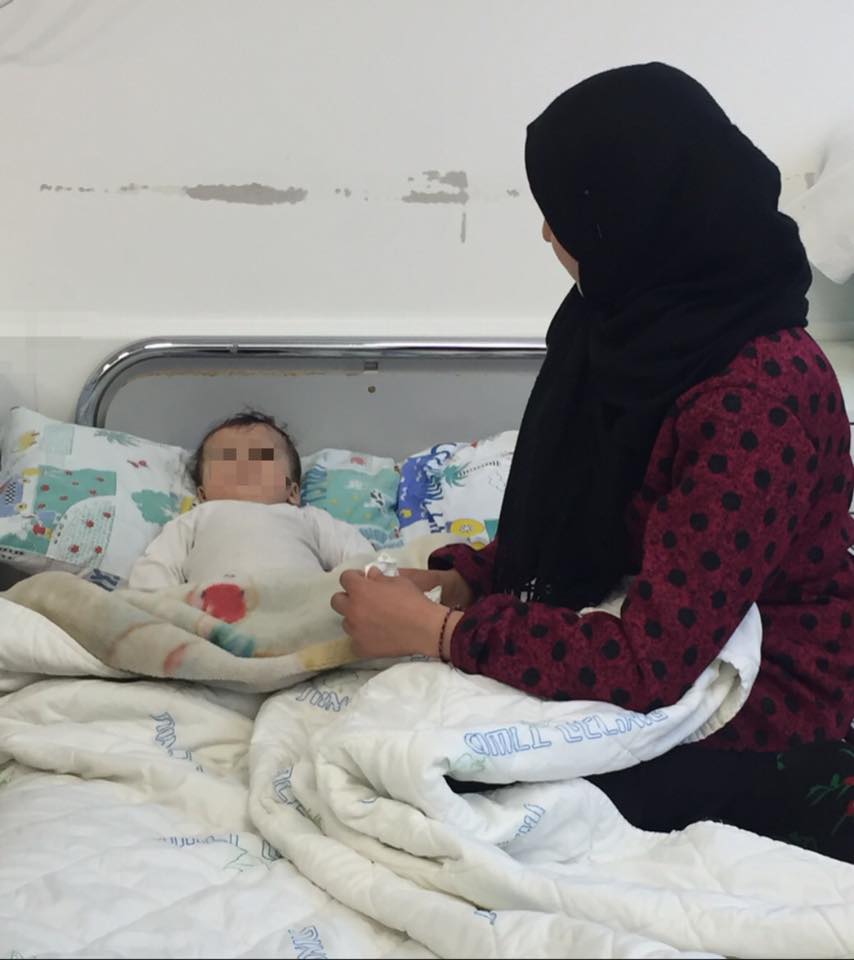 Syrian mother and her child at the Ziv Medical Centre.

The hospital has treated many people from Dera. Many of her acquaintances have returned to Syria and were able to tell her that Israel would treat her son. The woman may not leave her son’s ward. The hospital wants to protect her from potential Israeli backlash against Syrians. The woman wants to return to her family in Syria once her son’s condition improves. She currently has no connection with her family. Still, she is fearful. The Syrian government hates Israelis and could potentially kill her son. When her son is older, the woman plans to tell him that he was treated in an Israeli hospital.

Daniel Gordis succinctly summed it up when he stated that, in addition to striving for the benefit our own citizens;

“This country has become a country, with all of its imperfections, that sees as part of its purpose as looking out for other people.”

Israel will continue to provide aid and assistance to all those who need help, because it is the right thing to do. It’s in our genes. Together, we will overcome the darkness, and rebuild for a brighter future.