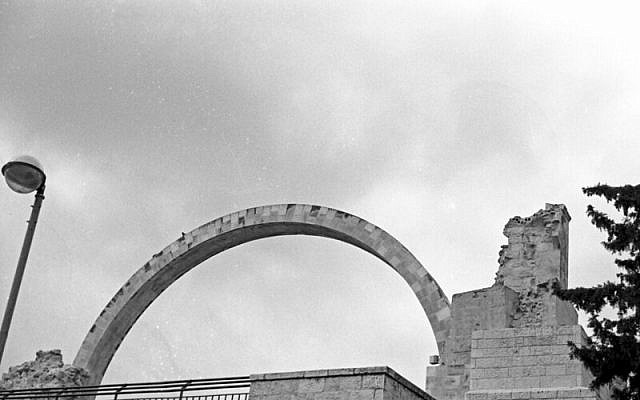 Remains of the Hurva Synagogue in Jerusalem, destroyed in 1948. Rebuilt in 2010

As I was reading the letters in the Washington Post between Sam Bahour and Nadav Eyal, I saw in the letters a similar train of thought I have seen in my conversations with my Palestinian MBA classmates and between many Palestinians and Jews online over the years. I have noticed the same arguments from both sides and the usual reliance on “Jewish truth and facts” that meet the impenetrable wall of Palestinian beliefs about Jews, Zionism, and occupation.

I’ve often tried to understand the divide, but it was an episode of the Hidden Brain and these letters that suddenly snapped the picture in place and made me realize the reason for the intractable inability of the meeting of the minds. The two camps are using similar words but they operate completely different modalities.

Palestinian beliefs dictate that Jews are but a religion, that they are Europeans, that they have no right to the land, that the 3000-year history means nothing, and that Zionism and the Israeli government want nothing more than occupation and denigration of all Palestinians. They dictate that no matter how far you go back, Palestinians are rightful indigenous citizens who are victims regardless of what they do and everything they do is a reaction to the occupation. Any and all facts that Jews and Israelis bring into this discussion to counter these principles and beliefs do not work.

The arguments and figures do not penetrate the armor, they are shot down by the Palestinian iron dome of beliefs and its accuracy is 100% not some paltry 90%.  In all the conversations, I have seen again and again that nothing about Jewish history in Israel, in the Middle East or Europe matters, nothing about conflicts matters, causality ends up mattering to the Palestinian side. There is a narrative that is impossible to battle because in the end, what we have is not a matter of facts, but a matter of an honor culture of the Arab Middle East clashing with the dignity culture of the Jews. And this is impossible to understand for Jews and Israelis because they do not understand honor.

One cannot argue with honor. Once honor has been maligned, once honor has been in any way attacked, it does not matter who controls the conflict or who benefits from it. Corruption, Iran, Hamas, who started the war, who ended it, how many died, nothing matters. Once the honor of one party has been attacked, the result is that there are only two things that the person who attacked the honor can do to stop the fight: fight until everyone dies or say you’re sorry, even if you’re right.

This sounds simple, except it isn’t. It is not easy because to the dignity culture and “rational” minded Jewish people who are reliant on facts, it is common sense that there is nothing for them to be sorry for. From a Jewish perspective, Jews came back to their lands, they offered lands, they fought wars they did not start, they won wars they did not start, and they protect themselves and do what any country would do.

You see, when fighting an Arab country, one must show respect, even in loss. If one wants the conflict to end, one must give the enemy an honorable way out or they will forever seek a way to restore their honor through any means possible. This was the brilliance of the 1972 generals in the war that brought Israel peace with Egypt. By giving Sadat a symbolic “win” in spite of a military loss, Sadat was then able to come back to the bargaining table with honor restored from the 1967 loss and that restored honor gave the support of the country to create peace.

Sadly, today, Israeli politicians have far less wisdom than the brilliant minds of 1972. Israeli politicians for far too long have been Jewish Americans. They lost the touch with the region in the Middle East mentality as they traveled to Europe and America and ate in American restaurants with the “rational”  American and European leaders.

Israeli politicians forgot that to make peace in the Middle East, compromise is irrelevant, to win they must first lose. It is not a compromise until you win, it is lose to give the opponent a win, and then they will be able to come to you as a victor and have the power to compromise the world. But as long as they are “beaten” and “humiliated” and “under the boot of occupation”, they will fight until the last breath, even if you offer them the land, Jerusalem, and the world.