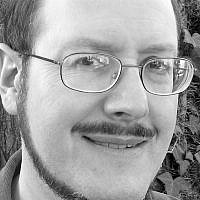 The Blogs
Michael Lesher
Apply for a Blog
Please note that the posts on The Blogs are contributed by third parties. The opinions, facts and any media content in them are presented solely by the authors, and neither The Times of Israel nor its partners assume any responsibility for them. Please contact us in case of abuse. In case of abuse,
Report this post.

In 1970, when I was 12 years old, I watched with a kind of horrified fascination as a sinister-looking, middle-aged man named J.B. Stoner delivered a stump speech in his campaign for governor of Georgia. Stoner would later go to prison for his role in the bombing of a black church — but his words that day, with their brutal derangement of the loftiest of human values, were enough to chill me to the bone.

“I am running,” Stoner said, “as the candidate of love: love of the white race!”

Stoner went on to enumerate some of the people excluded from that race: Jews and blacks (he called them “niggers”) headed the list. That was the J.B. Stoner version of “love.”

Being a Georgia native, I was not surprised to hear myself excluded, as a Jew, from Stoner’s sympathies. (My mother remembers that a neighbor of ours, when I was a baby, hesitated to eat something my mother had cooked, until being assured that there was no blood in it.) What did surprise me that day was the reaction of Georgia’s former governor, Lester Maddox, who after a minute or two of Stoner’s ranting walked off the candidates’ platform.

“It got to be nauseating,” Maddox told reporters. Bear in mind that Maddox himself was no stranger to race-baiting: his entry into Georgia politics came when, in violation of the newly-signed Civil Rights Act, he chased three prospective black customers out of his Pickrick Restaurant with a pistol, calling them “no-good dirty devils.” What so offended him about Stoner, Maddox explained, was the man’s hate speech: “People can’t help what they were born.”

For me, this repudiation of Stoner came as something of a revelation. It meant that even a hardened segregationist like Lester Maddox, a man whose ignorance and racism I had come to despise, understood that the protestation of “love” — when that love is pointedly offered only to one’s own kind, excluding others — doesn’t mean love at all. It means the opposite of love. It means hate.

If even Lester Maddox could see that — so I thought at the time — everyone should be able to see it.

Yet, evidently, there are still Jews who don’t — and that appalls me, because when Jews descend to the moral level of a church-bombing racist, it’s hard to see how even the finest words of our tradition can bring them back again, once the noblest of them all — love — has been corrupted into its antonym.

That’s what happened at the bizarre love-in just staged between two exceptionally hateful heads of state, Donald Trump and Benjamin Netanyahu. Trump, who still peddles the slander that American Muslims celebrated the September 11 attacks, is a natural ally of Netanyahu, who (to mention only a recent offense) has never apologized for falsely accusing a Palestinian killed by Israeli police last month of a “ramming attack” against an Israeli. But why isn’t the Jewish world outraged at the spectacle of Trump, between bursts of invective, dodging a question about his administration’s use of “xenophobia and maybe racist tones” with talk about “love”? For anyone who doesn’t remember, here’s what the president said:

“As far as people, Jewish people, so many friends; a daughter who happens to be here right now; a son-in-law, and three beautiful grandchildren…I think a lot of good things are happening. And you’re going to see a lot of love.”

Get it? Racism and xenophobia are okay, because President Trump has a “lot of love” for Jews. The fact that Trump’s answer was a non sequitur was widely noted in the news media. But the deeper point — the outrageous point — is that his answer turned on the same perversion of language coined by Stoner: racism and xenophobia, twin species of hate, really don’t add up to hate at all; they mean “love” — that is, love of the master class the speaker happens to deem worthy of it, in this case Jews.

I no more admired the late Ariel Sharon than I admired Lester Maddox. But the old terrorist at least seldom pretended, when he killed Palestinians, that he was acting out of love. He knew what violence was, and men who know that much tend to set some limits to their evil. It’s when people call destruction “love” that their violence knows no bounds.

Not so long ago, such doublethink occupied a fringe position in Israeli politics. It was the domain of the late Rabbi Meir Kahane, a Palestinian-hater of such intensity that even the Israeli government ultimately booted him from the Knesset. His favorite trope was, “I don’t hate Arabs, I love Jews” — the two phrases having identical meanings in Kahane’s moral universe. Evidently, Trump has mastered the same sickening rhetoric, as he wraps in the language of “love” a man (Jared Kushner) whose family foundation helps finance radical Jewish settlements which, in turn, launch frequent attacks on neighboring Palestinian villages.

But Kahane at least was controversial. Where is the Jewish public’s disgust at the American president’s embrace of Stonerism?

Alas, I’m afraid it’s nowhere: today the “hate is love” rhetoric that made Stoner repellent in 1970, and Kahane just as repellent in the 1980s, is practically taken for granted. The Jewish public has been nurtured too long on the bromide that Jews are somehow superior to other people. According to Philip Roth, Jewish children receive from their parents “no body of law, no body of learning…but a kind of psychology,” which translates as “Jews are better.” Most Orthodox Jews accept this on the strength of talmudic law’s systematic discrimination against non-Jews; Israel-supporting Jews seem to bask in the reflected spectacle of discriminatory Jewish power. Either way, the shock of being told that lording it over other people means “love” has just about worn off.

So when a Netanyahu talks about loving Jews, meaning that he hates everyone else, or a Trump claims it’s an antidote to xenophobia to encourage bigotry against Muslims and other minorities, the perverse language can marry things that — described in plain terms — would stand revealed as grotesquely incompatible. As Suzanne Schneider recently pointed out in Forward, there are strong affinities between the white supremacists and the Israel-firsters who supported Donald Trump’s campaign; but neither movement’s “love” will tolerate diversity or dissent in any place where the group holds sway. And Jews should have learned long ago to fear any political movement so intolerant.

Even as simple a lesson as that will be lost on us as long as we pervert the love of humanity into the love of Jews. When “love” becomes another word for “hate,” every act of religious or social solidarity only attaches us more strongly to a world governed by the things hate engenders – violence, fear, chaos. Only when we give the word its proper scope can we hope to combat today’s true terrors.

About the Author
Michael Lesher is an author, lawyer and Orthodox Jew who lives in Passaic, NJ. His most recent book is Sexual Abuse, Shonda and Concealment in Orthodox Jewish Communities (McFarland & Co., 2014).
Related Topics
Related Posts
Comments