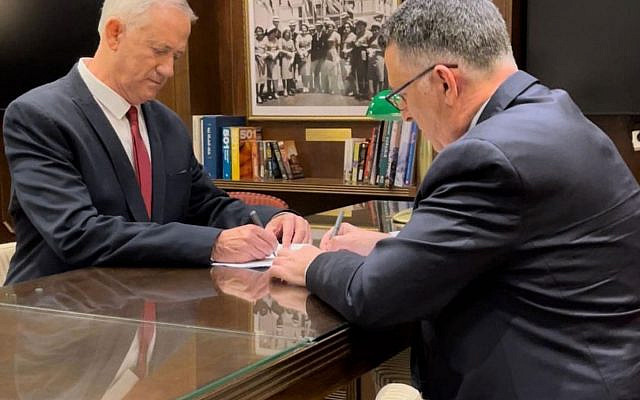 This week’s political merger between Benny Gantz and the Blue and White party with Gidon Sa’ar’s New Hope party has some folks shaking their head. There’s surely no shortage of criticism. The cynics argue that Blue and White made a bad deal and stands to lose stature and votes. Leftists claim it’s a sure sign of Blue and White’s reactionary DNA. Likud politicians are dismissive, lambasting another leftist scam to steal control from the country’s right-wing majority. Even ingenuous individuals may wonder about the motivation. Speaking as someone who has discussed this move with Gantz for some time, here’s why I believe this new political partnership makes sense for Israel:

For far too many years now, this country has suffered from a false dichotomy. People are forced to identify as “left” or as “right.” These two groups, presumably, have nothing in common. This polarization process did not happen by chance. For years, Bibi Netanyahu’s “right wing” block of Likud/Orthodox/Haredi parties served his political interest well. It allowed him to demonize anyone affiliated with a perspective not under his direct control as a “leftist.” with all the hateful nihilistic, anti-Zionist anti-patriotic implications. But the truth is that such a bifurcated political paradigm is a fundamentally imprecise basis for ideological classification in Israel.

After a year in the Knesset, I have come to believe that the vast majority of citizens are centrists. We actually agree on most matters. Israelis understand that a free-market economy is essential, but that it also leaves too many people behind. So, we support greater government interventions to provide a denser safety-net. We all see that Israel’s environment has suffered from rapid development and demographic growth and needs to be better protected. We know that Israel has an excellent system of justice, effective in protecting the rights of all minorities, which needs to be strengthened rather than scorned. And we understand that we need to be more proactive in working with moderate Palestinians to mitigate our century-old conflict.

Of course, there are extremists on the “right” and on the “left” who pull our country in other directions – both leading us down dangerous paths for the country’s future. But opinion polls show, time and again, that most Israeli citizens hold moderate positions. Perhaps the single greatest tragedy in the recent collapse of the “Change Government” is that as time went on, the centrist majority voice, which was the basis for the coalition agreement, ceased being heard. It was the extremists on the right and left fringes who ended up making demands, undermining commitments, and ultimately, tearing the sensitive package apart.

In retrospect, Benny Gantz and Gidon Sa’ar, along with their now-united factions, served as a muscular middle in the Change Government, fully committed to making governance by consensus work. In the final hours prior to the vote that disbanded the 24th Knesset, the Likud offered each of them the chance to become prime minister in a rotation with Netanyahu and each refused. This reflects their disqualification of indicted politicians. But it is also an expression of their unwillingness to play into the dynamics of toxic polarization. Gantz and Sa’ar turned down the highest office in the land because they are idealistic leaders who do not want to be a part of Bibi’s extreme, right-wing assault on Israeli democracy.

This explains best why the decision to unite the Blue and White and New Hope parties creates a unique opportunity for the Israeli public – an opportunity to opt out of the pernicious dichotomy between right and left that has incapacitated our government and left so many local communities alienated from each other. It allows us to redraw the political map and let the center lead for the common good.

Perhaps the greatest threat to such a critical political transformation happening at the ballot box is the mistaken notion that a centrist position lacks principles, vision or passion. After decades of being manipulated by politicians on both ends, too many Israelis feel that a serious political identity requires disdain for the other side. Extremist leaders naturally like to infer that political moderates lack conviction. Nothing could be further from the truth.

While everyone on the right and left pays lip service to strengthening the periphery – the new Blue and White/New Hope centrist party includes a minister of education whose home is Kiriyat Shmoneh, a Druze and Kibbutznik from the Lebanese border, along with highly effective former mayors from Eilat and Yeruham – the deep south. They are all about reducing the geographical gaps that still afflict the country. The vast majority of Israelis favor decriminalization of cannabis. New Hope’s Sharren Haskel is as passionate about this issue as I am about preserving open spaces and biodiversity, as part of Blue and White’s green agenda. Kibbutznik and past agricultural minister Alon Shuster knows more about food security, and cares more about farmers than any politician in years. Pnina Tamano-Shata’s commitment to absorbing Ethiopian and Ukrainian immigrants is unrivaled. Benny Gantz and Gidon Sa’ar don’t just talk the talk; they have put all their personal and political prestige on the line to preserve the independence of Israeli courts and strengthen our besieged judicial system.

So, my answer to cynics is simple. After working together in the government and the Knesset for a year, our two parties discovered that we like each other. More importantly, we found that we agree about most policy issues. Yes, we in Blue and White are fully committed, in the long run, to a two-state resolution of our conflict with the Palestinians and New Hope is not. But in the short term, we can absolutely agree on what can be done to reduce the friction, and launch confidence-building measures to improve the Palestinian economy and quality of life. We can start doing these things tomorrow.

By joining forces, and immediately becoming Israel’s third largest party, we are able to offer a real alternative for building a new political calculus – one in which the majority in the middle leads. It also makes room for other partners on the left and right, Jewish and Arab, religious and secular, to cooperate in addressing 80 percent of the challenges about which all Israelis agree. The merger already gives us the critical mass to be a ruling party.

It is always easy to feel self-righteous and remain safe inside a homogeneous political bubble where everyone agrees about everything. But such a small “niche” party will only speak to a fraction of the population. That is not what the country needs. Israel desperately needs a broad, stable, unity government.

Being part of a large party with the capacity to take on the responsibility of running a country means embracing diversity and knowing how to work out differences. Look at the Democrats in the US. There are enormous disparities between Bernie Sanders’ and Joe Biden’s supporters. But as a ruling party, they found ways to work together. Of course, there are disagreements between Blue and White and New Hope. But they are probably relevant for 10% of the country’s present policy challenges. We decided that these differences should not define us.

If people truly think about the country’s future, I believe that more and more will choose to leave their comfort zones on the “right” bloc with Bibi’s Likud or on the “leftist” bloc with Lapid’s Yesh Atid, to support the newly created Blue and White – New Hope centrist alternative that can bring Israelis together. That’s because we all know that the present deadlock is a very unhealthy place for our country.

In order to move beyond the present political paralysis, we need to break down psychological and ideological walls. I believe that Benny Gantz is the only Israeli leader capable of breaking down these walls who enjoys the confidence and affection of all of Israel’s tribes. When he speaks of heading a government led by a strong center, with room to integrate other perspectives, it is not just rhetoric. Anyone who accepts Israel as a Jewish and democratic state, and who eschews racism has a place.

It is high time to leave the polarizing dynamics of the past behind and pursue a more harmonious, stable political reality. As Israelis compare the alternative created by this week‘s political merger with that of a right-wing or left-wing government that leaves half the country angry and displaced, I believe many more will join us as the best way forward.