The Blogs
Kovi Skier
Apply for a Blog
Advertisement
Please note that the posts on The Blogs are contributed by third parties. The opinions, facts and any media content in them are presented solely by the authors, and neither The Times of Israel nor its partners assume any responsibility for them. Please contact us in case of abuse. In case of abuse,
Report this post. 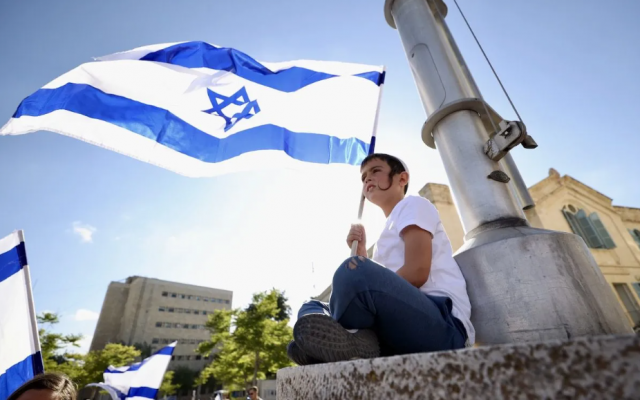 I’ve spent a long time thinking about what I could say that could possibly have a real impact on people planning to vote for the far-Right in this election.

I could warn about the dangers of Fascism, racism, incitement, or the creeping infiltration of religious coercion in state institutions. Those are arguments that resonate strongly with me, so it’s natural to think that they would resonate with others as well. But of course, to indulge this instinct would be to fall victim to the classic survivor fallacy: the people I want to reach the most are not the people these arguments will reach.

It’s not because my friends on the far-Right embrace these concepts as values – and yes, I say my “friends,” in spite of it all, because a meaningful exchange can only stem from a place of mutual respect and appreciation. And so, rather than stew in my feelings of disbelief and betrayal at the course my nation seems to be taking, I am forced to reckon with the far more intimidating question of why.

A lifetime ago, I lived on the other side of that divide, where the Right were the noble defenders of our country, and the Left were all saboteurs and collaborators. I wasn’t evil or cruel then – I certainly didn’t think of myself as such – so it would be a mistake to think my political opponents today are evil or cruel, either. Why, then? If the Right love democracy, why vote for a strongman? If the Right are not racist, why vote for parties that will seek to persecute Arabs? If the Right believes in equality, why partner with actors that will seek to curtail the rights of women and minorities?

The answer is that the Right perceives reality differently than I do today. The Right does not see any of the above statements to be true. And to appeal to the Right to walk back from the national mistake that seems all but certain to unfold in the next 24 hours, I must appeal from within that reality, not my own.

In the reality of the Right, a strongman is not antithetical to democracy at all – because the right embraces a narrower, bare-bones picture of democracy that is simply the rule of the majority. Indeed, a strongman might sometimes be needed to protect democracy from the forces of evil. After all, wasn’t it dithering Neville Chamberlain who surrendered democratic Europe to Hitler? Couldn’t a strong, impassioned leader – elected, of course – steer us away from the mistakes of past appeasers? The Right, more than anything, remembers Oslo and the Intifada. To the Right, the repeated wars in the South and the numbing reality of Occupation are not exercises in futility; rather, they are evidence of the futility of engagement with an enemy who, they believe, wills nothing less than to annihilate us, and cannot be trusted.

To this argument, I would submit that democracy is a bit more complicated than that, and we would do well not to forget it. It is important to remember that the murderous maniac who confronted Chamberlain at the negotiating table was also democratically elected. Pure rule by majority is not sustainable, and never has been, because ultimately and inevitably, the majority will one day place such faith in a strongman that it surrenders its own agency and terminates the democracy that ushered it in. The founding fathers of the United States – the petri dish of modern democracy – understood the latent threat of democracy itself giving rise to autocracy, which is why they codified the Constitution – a document whose sole purpose is to protect democracy by imposing limitations on it. Without ensuring certain inalienable rights to the populace, the people cannot be prevented from forfeiting their freedom.

So how do we distinguish when a strongman is “our man” – a bullish but faithful defender of democracy – from those instances where he may be, in fact, bent on its demise?  By watching to see who he targets: the autocratic enemies of democracy without? Or the institutions and limitations of democracy itself?

Ben Gvir is not the strongman who will protect our democracy, because he flouts its defenders and institutions. He offers confrontation with Israel’s enemies, but no assurances as to what part of Israel could actually endure in the absence of the norms and institutions he would dismantle in this pursuit. After all, if the rights and citizenship of Arabs are not safe, whose are? Cannot the same administrative detentions that were once used to persecute Arabs also be used to persecute Jews? To be clear, I find any encroachments on the rights of Arab citizens, or even Palestinians, to be indefensible. But it must nonetheless be noted that even if one were to deem such encroachment necessary to protect the majority, it would still be a self-defeating and utterly futile endeavor.

Ushering in the age of strongmen in Israel would not make us safer or bolder in the face of our enemies. Indeed, as our enemies have gradually shrunken and melted away one by one, one cannot help but question why such a brutish show of strength is even necessary now? But one outcome is certain: it will erode our institutions and rights, ultimately making each one of us more vulnerable to the potential overreaches of an autocratic regime. It behooves the Right to consider if this is not a likely outcome of the coming elections, and if there might not be more moderate means to achieve their ends.

Similarly, there are many among the Religious right, in particular, who fear the loss of Jewish religious identity implied by granting full equality under the law to women, the LGBTQ community, and religious and ethnic minorities. Growing up in a small ultra-Orthodox community in Milwaukee, I remember well how we were taught to view anything contrary to our way of life as not only different, but an existential threat; how allowing any outside influence into our homes or exposing ourselves to ulterior viewpoints would inevitably and hopelessly corrupt us. It is difficult to argue with such an entrenched and internalized sense of fear and persecution.

Even so, I urge my religious friends to ask themselves: have we not all been exposed, as it were? Anyone reading this article has access to the internet, at the least. Anyone engaged in politics at all, for that matter, has been exposed to alternative viewpoints. And what does it say to you, that you remain so steadfast in your religious and conservative convictions, notwithstanding this exposure? Perhaps your belief system is more steadfast than you give it credit for. Perhaps the Jewish and religious character of Israel can similarly survive coexistence with its secular and democratic aspects, rather than living in a constant struggle for dominance of one over the other. There is a deep and irredeemable cost to compelling others to participate in our religious choices – a cost paid in human suffering, and mutual loathing and fear. Is this the future in our Homeland that we prayed for? Was this not the downfall of the ancient Jewish state?

When the previous government came to power, the leaders of the Right – the same ones running for office tomorrow – cried doom and gloom from the mountaintops. They said a Leftist government will surrender land. They said the Arab parties will undermine and betray us. They said Lapid will shutter the yeshivot and draft the students. But did any of these prophesies come to fruition?

The Ben Gvir calculus depends on a minimum threshold of fear and grievance among its constituents. I implore each of us to question if this fear is justified. Israel is stronger than it has ever been. We are a regional superpower. We face no serious internal or external threats. Religious freedom is guaranteed to all Jews. We have a strong army. We can continue to have all those things without a strongman at the helm, slowly depriving us of control over our shared destiny.

If you are planning on voting for a strongman tomorrow, I ask that you reconsider. Vote for Benny Gantz, a patriot who led our army through periods of uncertainty and served our country with dignity. Vote for Yair Lapid, a leader who has never hesitated to reach across the aisle and work hand in hand with religious and conservative alike. Vote for Liberman, who has stood on his principles and championed fairness and equality in the face of religious extremism. There are many, many ways to be a patriotic Zionist in these elections – even if you fundamentally disagree with the Left – without giving in to proponents of fear.

You can believe in a strong Israel without a strongman. Tomorrow, lets keep our country strong, by rejecting the fear and suspicion for our neighbors that has driven us to the edge of the abyss, and remembering the shared future that we are fighting for.

About the Author
I was raised in a small Ultra-Orthodox community in Milwaukee, and made Aliya at the age of 18. I volunteered in the IDF and continue to serve in the reserves. Today I work and research in the field of law, while enthusiastically pursuing my hobbies of historical and political research and discourse. I am a husband and father of three.
Related Topics
Related Posts