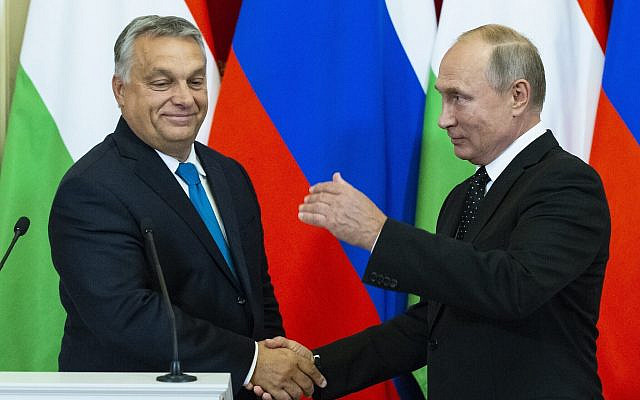 The re-election of a prime minister in a European country with a population not much bigger than Israel’s is not usually of great import for the wider world. But Viktor Orban’s success in the Hungarian elections on Sunday is hugely significant in a global war of ideas, with implications for the politics of the US, Europe and Israel.

Like many countries freed from the yoke of communism as the Soviet Union teetered and then collapsed, Hungary became a democracy in 1989. Viktor Orban’s Fidesz party was elected in 2010 as a mainstream right-wing party. But in the first few years of Orban’s tenure, he changed the rules on amending the constitution, packed the Supreme Court with supporters, dismissed members of the Election Commission and replaced them with party loyalists. He established a ‘Media Council’ with the authority to fine outlets whose coverage the government did not deem ‘balanced’

Since then opposition figures have been arrested in front of television cameras. Previously neutral public radio and TV stations have been converted into government propaganda stations.

The election result proved right those who had warned that Orban’s ‘reforms’ made a fair election impossible. As Yascha Mounk, the writer and pro-democracy activist tweeted:

Populists can use their control over the press and the voting system to stay in power through unfair elections. If they ever grow so unpopular that they lose anyway, they can ignore the results. I increasingly doubt that Orban will ever leave office because he loses an election.

The independent organization Freedom House, which monitors the state of democracy in the world no longer ranks Hungary as a functioning democracy.

This is bad news of course for Hungarians – but not only for them. Orban has become the role model for a loose network of illiberal nationalists and wannabe authoritarians across the globe. A group united not by an overarching ideology like communism or fascism, but by a hostility to the secular liberalism of the age and its manifold sins – real, exaggerated and imagined. Populist far-right parties in western Europe, with their roots in fascism, like Marine Le Pen’s National Rally in France or Austria’s Freedom Party, admire Orban’s hostility to immigration and railing at the European Union. Poland’s ruling Law & Justice Party has expressly cited Fidesz as a model.

But it’s in the US where support for Orban is most dangerous, and most disturbing. The election of Donald Trump emboldened and encouraged a previously marginal trend in American conservatism, hostile not just to ‘liberalism’ in the partisan sense of the word (“liberals vs. conservatives”) but in the much broader, historical sense; liberalism as the very basis of Western democracies. Values such as freedom of speech, an independent judiciary, the rule of law, free and fair elections and the peaceful transition of power.

Most are associated with an intellectual movement called National Conservatism (“NatCons”), which stresses the importance of conservative family values and preserving distinct national cultural and religious traditions. In this they share much with European right-wing nationalists. They don’t have the same historical baggage of fascism and antisemitism, but some are certainly sympathetic to racism and White Nationalism (Fox News anchor Tucker Carlson is a high-profile example). Without exception however, they see Orban as a hero for standing up to the EU, feminism and the Gay rights lobby, seemingly untroubled by his dismantling of a free press, an independent judiciary and the possibility of fair elections. On the contrary, his election was greeted with celebratory Tweets by NatCon writers like Sohrab Ahmari and Rod Dreher.

These Western supporters of Orban resemble nothing so much as Western Marxists during the Cold War who praised the new utopia in the Soviet Union. Orban’s Hungary is not the USSR, but his “useful idiots” in the West, like those of Lenin and Stalin, are similarly eager to parrot the Party line while never mentioning the inconvenient facts about the regime, which would make many of their readers recoil. And just as the Soviet Union (and Mao’s China, Cambodia etc.) proved that communism in practice was a horror show, so Orban’s Hungary should at least hint to American National Conservatives that, however legitimate their concerns might be at the excesses of ‘progessivism’, attempting to counter them by effectively abandoning liberal democracy, leads to something far worse. At the very least they should appreciate the irony that the freedom they have in “woke” America to write and publish widely against the government, would not be possible if the US were more like Hungary.

If you still need convincing that the NatCons should be given a wide berth, consider that almost all of the most prominent members of this group are, at best, neutral on the Russia-Ukraine conflict, others are out-and-out Putin apologists. (Orban himself is a long-time Putin admirer and took a verbal swing at Volodymyr Zelensky in his victory speech on Sunday.)

But what of Israel? Simply this: It’s not a coincidence that Orban is admired by many of Netanyahu’s acolytes today – and is positively adored by Netanyahu’s son, Yair. Nor that a senior aide to Orban said that his boss and Netanyahu “belong to the same political family.” Israel is not Hungary, but if Netanyahu had won the last election, he would have acted to prevent his possible conviction on corruption charges, aided by ultra-Orthodox and far-right coalition partners entirely willing to subvert democracy and the rule of law.

They would have passed a law granting him immunity, and then a subsequent ‘override clause’ preventing the Supreme Court from intervening. Israel would have started to look a lot more like Orban’s “illiberal democracy”.

And it still might. If the lesson of Orban’s election win for Americans is to be more aware of the misguided agenda of the NatCons, and the misinformation they are peddling about what a ‘National Conservative’ regime looks like in practice; in Israel it brings a more urgent warning. Given today’s political events, new Knesset elections are once again a not unlikely scenario. As current events in Eastern Europe are bringing home to us more sharply than ever, the post-Cold War holiday from history is over. If we want democracy to triumph over autocracy, we had better be able to recognize the threat when we see it.