The Blogs
Abraham Cooper
Apply for a Blog
Please note that the posts on The Blogs are contributed by third parties. The opinions, facts and any media content in them are presented solely by the authors, and neither The Times of Israel nor its partners assume any responsibility for them. Please contact us in case of abuse. In case of abuse,
Report this post. 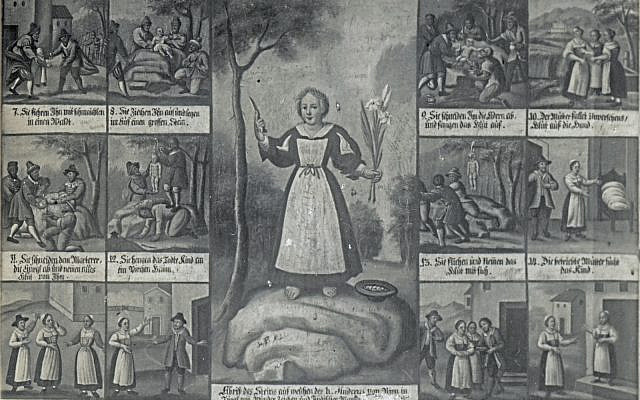 Detail of a postcard depicting and early 19th century painting of a Jewish ritual murder story as depicted in the Church of Judenstein, Austria (PD)

On May 5, 1945, American troops liberated from Austria’s Mauthausen concentration camp a 37-year-old, 97-pound survivor of six million murdered Jews. Simon Wiesenthal could have remained paralyzed by grief for the 89 relatives lost by him and for his wife, Cyla, whom he did not yet know had also survived. But within days of his freedom, he found the strength to begin compiling from memory an 8-page list of almost 150 Nazi criminals whose crimes he knew firsthand.

Thus, began Simon Wiesenthal’s lonely and thankless task to track down the mass murderers of his people, first in Linz, then in Vienna, seeking justice from a largely apathetic world.

In 1951, Wiesenthal visited Judenstein, a picturesque town in Austria’s Tyrol, famed for miracles performed by the local child martyr, Andrew of Rinn. For hundreds of years it was a pilgrimage site for the faithful who came to worship this beatified child, venerated as a victim of alleged Jewish ritual murder in 1462.

Wiesenthal found a village church whose nave, near the altar and in front of a tapestry, featured menacing Jewish figures with knives drawn, ready to dismember an infant, swaddled in white, laid out for slaughter on “the Jews’ Stone.” Postcards could be purchased. Busloads of children would visit annually with their parents and teachers. A type of passion play was performed to inspire the youth.

Wiesenthal wrote a newspaper article, “Tiroler Ritualmord Marchen,” and a protest letter to the local Bishop. Six years after Auschwitz, this was the initial reaction of Bishop Paul Rusch (who later relented): “This Jewish writer goes much too far if he meant to claim that Jews never did such things.” Only in 1961 did Pope John XXIII secretly order the suppression of the child martyr cult and that a plaque be installed exonerating the Jews. But local clergy threatened a rebellion if the statue of infant Andrele (as he was called) was removed. The pilgrimages continued, with the statue surrounded by flowers and candles.

By 1994, due to the efforts of Bishop Reinhold Stecher, the blood libel story was officially disowned by the Church which reversed the beatification of little Anderle. The shrine was turned into a memorial to the victims of anti-Semitism, although local residents continued to complain about the loss of “their saint.”

The Judenstein blood libel occurred soon after the printing press was invented, giving a whole new lease on life to ritual murder accusations that featured in such illustrated books as The Nuremberg Chronicles. The Judenstein blood libel was the first but not the most infamous such accusation in the Italian-Austrian border region. That was the Martyrdom of Simon of Trent in 1475 involving lurid, baseless charges by local prelates intent on creating a tourist attraction. The Pope tried to intervene, but of little avail. Eight Jewish men, accused of murdering little Simon two days after Passover “to the accompaniment of Hebrew curses and bells.”  They were savagely tortured and then executed.

In the 1600s in Frankfurt under the Bridge Tower, there was a mural of the bleeding child Simon of Trent, punctured by awls. Local Jews protested, with the result that the painting was not removed but renovated by the city council.

You might think that—except perhaps in Middle Eastern dens of Muslim fanaticism—unfortunate Simon of Trent (who drowned because of his parent’s neglect) and Andrew of Rinn (who may never even have existed) would by now have been relegated to the status of pathetic historical curiosities. Think again.

The ultimate Big Lie, despite the protestation of a Holocaust survivor and the intervention of a sainted Pope lives on.

In the minds and hearts of two twenty-first century mass murderers:

Robert Bowers, who murdered 11 at Pittsburgh Tree of Life Synagogue in November, 2018, mocked his victims by comparing his crimes to payback for the “jewish [sic] Ritual Murder . . . also known as Blood Libel”, actually committed by ISIS! Echoing Bowers was John T. Earnest, who murdered one and maimed others at San Diego County’s Poway Synagogue on Passover, 2019. He wrote in his online manifesto: “You are not forgotten Simon of Trent, the horror that you and countless children have endured at the hands of the Jews will never be forgiven.”

In our time, the Blood Libel and other conspiracies are alive and well, infecting young people in the virtual world of social media with real-world anti-Semitism. In the new age of social media, in an era of resurgent anti-Semitism, it is up to us to continue Mr. Wiesenthal’s quest for truth and justice.

This post was co-authored by historian Dr. Harold Brackman, who is a consultant for the Simon Wiesenthal Center.