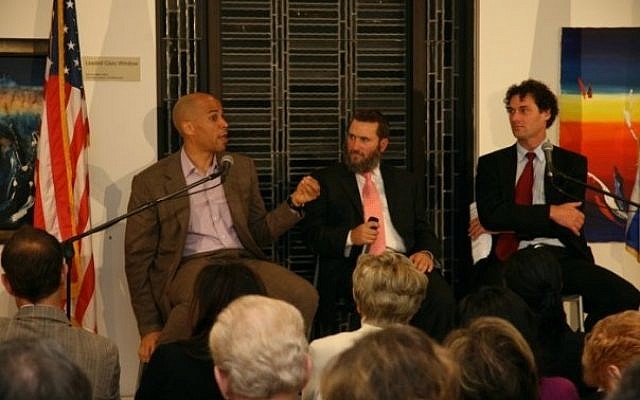 Cory Booker and Shmuley Boteach at happier times. (Courtesy shmuley.com, via The TImes of Israel)

Ever since junior United States Senator from New Jersey Cory Anthony Booker ended his Oxford bromance with Rabbi Shmuley Boteach, the latter is been left hurting and confused. Was Cory an anti-Semite after all, you hear him think at every sentence he publicly mourns his loss. He’s asking himself ever since: Why?

Since he has a habit of giving celebrities advice through the media and is telling us about his broken heart about Cory all the time, I’ll now take a leaf from his book and tell him why.

Funny as that may sound, Cory got sick and tired of you. That’s the reason, unimaginable as that may seem to you. He disconnected because he obviously can’t take you any longer. The reasons for that lie in every column you write, including your last one.

But first, let me thank you for bringing Torah to so many people, including Gentiles. And for not giving up when Chabad Lubavitch dumped you. And for giving prominence to fighting genocide. And for not letting humble upbringings and sneers of well-to-do Jews stop you.

Every one of these things is enormous and you should only be treated with respect for it. Having stated this, back to how you are impossible.

1. You use arguments as proofs and guns. You are right because you have the best arguments and therefore others must agree with you.

No, they don’t. Even the best arguments become insufferable when they are used as weapons. Give an opponent in a discussion respect for their viewpoint and person. You may be righty but by demanding people to agree, you become wrong after all.

Most bullies abuse to become top dog. You try to control by proving that you are more right. Most others don’t like this. And since they couldn’t explain it to you – because you are always right – they just walk away.

Also, you don’t let him be him. He must be your student, your friend, yours. He has to stand inside the frame that you give him. Maybe instead, call yourself his friend, his teacher for some time? Surely, he needs to honor his teachers, but that’s not for you to claim. That’s his mitzvah. Your task in friendship is to meekly mind your own obligations.

One thing that gives this away is that frankly, he seems more humble than you. He comes across as proud but not arrogant. He’s a student of yours you could be proud of.

Humility is the answer. Surely, you had to use chutzpah and force to get there, but you got there and now you need to stack up on this most precious character trait. Being famous only gets better with modesty.

2. You act as if you trust Gentiles but you don’t really. Deep down, you believe that Jews are terrible and that Gentiles must be crazy to love us.

Why this checking all the time if you can spot some anti-Semitism in him? It becomes oppressive after some time. Yes, we find it harder to trust than to love but we must. While the Goyim, no doubt, caused our tremendously enlarged talent for being suspicious, not every non-Jew you meet is responsible for that. While trust must be earned, the obligation to give others the benefit of the doubt is on us, not them.

The solution is to trust and love him. That’s what G^d does with us and that’s what we should do with our friends. Unconditional love. It’s much stronger than “I love you because I believe that I can trust you.”

Now, when you repeatedly, humbly and lovingly apologize to Cory for being obnoxious, too-full-of-yourself and mistrustful and he still doesn’t renew your friendship, then I must be wrong. Please try.

Full disclosure: I once made a big effort to see you, to talk to you. I had carefully written out the gist of what I wanted to tell you, not to take of your precious time at a possibly inconvenient moment. But you handed the sheet to an assistant and I never heard from you. Not even a meek: No thank you. Your full right but not fitting your standards, I’m sure.