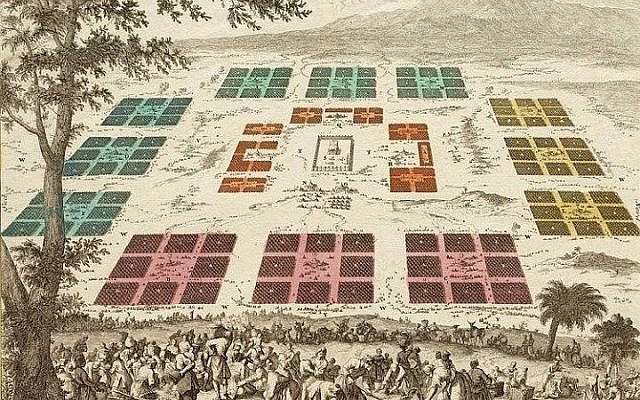 The order of the Israelite camp in the wilderness. (Jan Luyken,1700 Amsterdam Museum cc 1.0, public domain)

“The ultimate answer to life, the universe, and everything is… 42!”
― Douglas Adams, The Hitchhiker’s Guide to the Galaxy

Parshat Masai begins with list of the 42 different stops at which the Jews encamped during the 40 years in the desert. Most readers just skip these verses or run through them quickly. Maimonides writes in his Guide to the Perplexed (3:50):

Know that every story that we find recorded in the Torah is there for a reason. It is essential, whether it is intended to affirm a principle that is one of the foundations of the Torah, or whether its purpose is to [help us] correct some or other action, so that there will be no injustice and cruelty among people. And I shall arrange this in order for you… Hence, the order of the record of the “journeys” would appear – on the surface – to serve no purpose at all.

On the one hand, every word in Torah is there for us to learn from, yet this list in our parsha presents us a challenge to unveil its deeper meanings.

According to Rashi, the list teaches the great compassion that God has for His people. Even though they were punished with 40 years of wandering, they were not actually always on the move: in 38 years, there were a total of 20 Israelite encampments. Taking Rashi’s interpretation several steps further, R. Yitzchak Arama explained that every one of the places listed was a place that God did a very specific kindness for the people, usually in the form of a miracle. Rambam (Maimonides) similarly noted the miracles in the wilderness, maintaining that people may well underestimate the miraculous nature of the Jews’ stay there.

In order to remove all these doubts and to firmly establish the accuracy of the account of these miracles, Scripture enumerates all the stations, so that coming generations may see them, and learn the greatness of the miracle which enabled human beings to live in those places 40 years.

But even without moving around a tremendous amount, life in the desert was difficult for the Children of Israel, not the least because they never knew when they would be moving along. Their camping experiences varied – from a week to a month or a year or even 19 years. Instead of focusing on the mercy of the Divine, R. Ovadiah Seforno explained that this list of encampments highlights the greatness of the people — that they had followed God in the wilderness blindly, never knowing if the next place would be better or worse than the one they were departing, never knowing when the next call to pack up and move out would come. Their residence was totally instable and unpredictable, yet they threw their lot in with God and developed a deep-rooted faith.

Yet another understanding of why the Torah lists all the encampments is found by the medieval Tosafists. They explain that the list is necessary for halakhic reasons. Namely, one is required to make a blessing in every place a miracle happened to one’s forefathers. The Torah therefore gives you the names of the locations so that you can fulfill this obligation.

The kabbalists see no coincidence in the fact that there are 42 stops. After all, one of the many names of God consists of 42 letters. (Hence, it is customary when reading these verses not to have any break-to reflect God’s unity).

The Baal Shem Tov, the father of the Hasidic movement, is quoted as saying that every individual Jew in each generation has to take a 42-step journey from birth to death. All human beings have to know where they came from and where they are going. Don Yitzhak Abarbanel says that this idea hearkens back to the 42 stations that the nation passed through on its way to redemption. Making that real, the Hida (Rabbi Chaim Yosef David Azulai) observed that the first letter of the first four words of the parsha represent the four exiles of the Jewish people: Eileh — These are: Edom (Rome); Masai — the journeys: Madai (Media-Persia); B’nei – children: Bavel (Babylonia); Yisrael – Israel: Yavan (Greece).

The list also highlights four events; the sweet water in Elim, the lack of water in Refidim, the death of Aaron, and the war with the Canaanites. Rabbanit Sharon Rimon has suggested that the list of travels represent the process that the nation must undergo to transform from a group of slaves to a nation that will be able to fight for the land of Israel. The events in the two water stories identified here helped develop the special mutual love relationship between God and the Children of Israel. As that dynamic deepened, Aaron died, and his death came to represent the demise of the entire generation that left Egypt. And finally, the war is the first successful battle of the new generation. Thus, these four events summarize the entire period of wandering and the significance of the trip.

Life is a journey, not a destination. It may be cliché, but it is also true — namely, we should always be moving. There are no shortcuts. Each individual and the nation as a whole must take the long trip, sometimes difficult sometimes unstable and unpredictable and maybe even appearing meaningless, but the challenge of the journey is perhaps necessary, as it ultimately leads to redemption.

A postscript: One of the reasons that progressing toward success can feel particularly difficult is that our role models generally achieve their own success over many years. We often encounter our leadership as role models, especially religious leadership, in their shadow years. They have achieved greatness over the full period of their lives, through many years, and a myriad of experiences. We are remiss when we default into concluding that they were born great — we often know nothing of the road traversed by those who are successful prior to their states as the great ones, and rabbis and rabbinic scholars are no exception to that. How many failings and back-slidings did those who emerged as great Jewish leaders experience before they could hold their own? The chapters of growth in their lives are generally hidden from the eyes of spectators, and we who find them to be leaders miss out when we cannot identity the travail that built up each great individual. If nothing else, this parsha makes sure we know exactly how important is every step of the way.