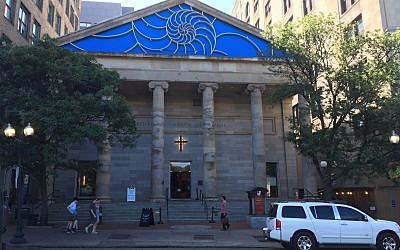 The entrance to the Cathedral Church of St. Paul in Boston, Mass. (Photo: Dexter Van Zile)

By now you’d have to be living under a rock not to know that Episcopal Bishop Gayle Harris from Massachusetts has apologized for broadcasting unverified atrocity stories about Israel to her fellow bishops at her church’s General Convention in July. Reasonable people are unhappy with her apology because she did not admit that the stories she told were false, but only said they were unsubstantiated.

I see it differently. Bishop Harris is one of the very few Christians that I have written about over the past decade or so to take any responsibility for bearing false witness against Israel. Someone of Harris’s stature offering an apology of any sort, even if it’s not perfect, is cause for at least some degree of celebration.

For the past 13 years, I’ve written about a lot of Christians who have said and written things similar to what Bishop Gayle Harris said during the July 13, 2018 session of the House of Bishops, but they’ve never apologized, at least not publicly. By apologizing, she showed strength of character that so many others have not.

So while I am happy to see a Christian leader take responsibility for her statements regarding Israel, I’ve been afflicted by nagging feelings of uncertainty. I’ve written dozens — if not hundreds — of articles about other Christians defaming Israel and the first person to publicly walk the plank for broadcasting misinformation like this is an African American woman. Lots of white men (and a few women) in the progressive mainline community have done the same or worse as Bishop Harris and they haven’t apologized. What’s that about?

The last person to walk the plank the way Gayle Harris did was John Strugnell, a scholar who resigned from his position in the group investigating the Dead Sea Scrolls after he made a slur against Judaism in 1990.

Former Anglican Priest Stephen Sizer has apologized — many times — for saying mean, hurtful, untrue things about Israel and Jews, but I simply can’t include him in the data set in good conscience. His apologies seem shallow and insincere (in part because he keeps making the same mistakes). Gayle Harris’s, as imperfect as it is, seems to be made in good faith. Maybe she will prove me wrong in the future, but until then, I am going to take her at her word. “The fault is solely mine,” she said.

But when it comes to Christians broadcasting falsehoods about Israel, Bishop Harris has lots of company. Offering up anti-Israel propaganda without any regard to whether it was true has been the thing to do in the circles of progressive Christianity, mainline churches especially. Weighing the facts of the matter, trying to discern the wheat from the chaff when Palestinians say something to you about how evil Israel is? That’s not part of the drill.

Talking smack about the Jewish homeland is a privilege that comes from belonging to the progressive branch of Christianity. Maybe it’s just random happenstance, an accident, but it’s hard not to ask if Harris’s gender and race somehow disqualified her from enjoying the privilege of defaming Israel accorded to so many other white progressives (and Palestinian Christians). But it seems the progressive Christian privilege of defaming Israel without consequence is not equally shared across all people groups within the anti-Zionist country club of progressive mainline Christianity.

Maybe there is nothing to the fact that the first person that I’ve seen apologize for offering up anti-Israel calumnies is an African American woman. Maybe it’s all in my head. The things she said were pretty shocking and she does support BDS. But Bishop Harris is not alone on either of these counts.

This not an argument to prevent Bishop Harris from being held accountable for her statements. No one should have the privilege of promoting dishonest propaganda against Israel. Fortunately, Bishop Harris seems to know this. That’s why she apologized.

But the dichotomy is pretty stark and undeniable. When Anglican Priest Naim Ateek was called out for using crucifixion imagery to demonize Israel during the Second Intifada, Episcopal Church staffer Brian Grieves came to his defense, declaring that Ateek’s critics had engaged in “slander and demonizing tactics.” Where is Brian Grieves now?

Maybe I should think the best of what’s happened and conclude that now that Bishop Harris has apologized for broadcasting misinformation, there is a new regime under which progressive Christians are no longer given leave to defame Israel with misinformation — unless of course, offering up dishonest anti-Israel propaganda is a privileged reserved for white progressive Christians. Perish the thought!

Fortunately, something can be done to alleviate my nagging suspicion that Bishop Harris has, by virtue of her status as an African American woman, been left holding the bag and made to walk the plank to atone for the sins of everyone in the American mainline who has broadcast misinformation about the Jewish state.

There is a way to alleviate my fears. Below are a few people who can follow Bishop Harris’s example, do the right thing, and apologize like she did.

Jeff Fager, a member of St. Mark’s Episcopal Church in New Canaan, Connecticut can apologize. Fager, who is executive producer of 60 Minutes, can apologize for his show’s failure to correct the record when it falsely reported in 2012 that an Israeli-built security barrier completely surrounds Bethlehem “turning the city of Christ’s birth into an open air prison.” He repeated this falsehood in his church the following year and was again challenged to correct the record. No correction, no apology.

James M. Wall, former editor of Christian Century — and a pastor in the United Methodist Church — can apologize. Wall, one of the most prominent mainline intellectuals in the latter half of the 20th Century, became (after his retirement from Christian Century) assistant editor of Veterans News Now, a website that promoted The Illustrated Protocols of Zion by David Duke.

Instead of being publicly rebuked for his decision to openly affiliate with a website that promoted antisemitism, Wall was allowed to quietly have his name taken off of VNN’s masthead. The United Methodist Church gave Wall a pass — at least publicly. A few years later, Christian Century took his name off their masthead — quietly and without fanfare. There was no public reckoning. In other words, no correction. No apology.

Gary Burge, a Presbyterian Minister and author of Whose Land? Whose Promise? What Christians Aren’t Being Told About Israel and the Palestinians can apologize too. The United Church of Christ published two editions of this book, which is filled with misinformation and a theological attack on the notion of Jewish sovereignty. The UCC’s publishing house, Pilgrim Press, publishes this book to this day. Some corrections were made in the second edition, but otherwise, no apology.

Then there’s Margaret Payne, former Bishop for the Evangelical Lutheran Church in New England. In 2009, she gave an interview that included some falsehoods about Israel and when CAMERA pointed them out, she told us, in not so many words, to take a hike. No correction. No apology.

For all those folks who are unhappy with Bishop Harris’s apology, I get it. She enlisted in the propaganda war against the Jewish state, uttering egregious falsehoods that demonized Israel. But she apologized. Was it a perfect apology? Nope. But the question remains: Why have so many other Christians failed to do what Bishop Harris has done?