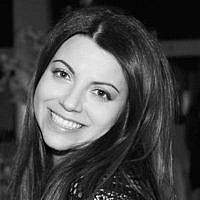 The Blogs
Masha Pearl
Apply for a Blog
Advertisement
Please note that the posts on The Blogs are contributed by third parties. The opinions, facts and any media content in them are presented solely by the authors, and neither The Times of Israel nor its partners assume any responsibility for them. Please contact us in case of abuse. In case of abuse,
Report this post.

As the world rides the recovery tailwinds from the COVID-19 pandemic and grapples with the current crisis in Ukraine, The Blue Card has been hard at work to ensure that needs of Holocaust survivors are met with dignity.

The Blue Card will be participating in this year’s Jerusalem Marathon along with 10 runners who will be representing the organization. There are many reasons why members of team Blue Card are running. Participants race to raise awareness about Holocaust education and to support vital assistance programs for remaining survivors.

As a grandchild of Holocaust survivors and the Executive Director of The Blue Card, a 90-year organization with the sole mission of aiding Holocaust survivors, this cause is incredibly close to my heart and has a significant impact as more than half of US survivors fall 200% below the federal poverty line.

Participating in the Jerusalem Marathon along with our team, not only raises critical funds to meet basic needs of Holocaust survivors such as food, medical care, mental healthcare, and living assistance, but also raises awareness of the need for this time sensitive work.

As we look overseas at the humanitarian crisis in Ukraine, we have been reminded that the history of the Holocaust continues to be ignored and distorted for personal gain as we have seen false claims that Ukraine is being run by neo-Nazis, the bombing of the site of the Babin Yar Holocaust memorial, and essential resources have been harder to obtain for Holocaust survivors living in the country. This week alone we learned of the harrowing story of 96-year-old Holocaust survivor, Borys Romanchenko, who was murdered by a Russian strike in Kharkiv.

In addition to running in the 2022 Jerusalem Marathon, we will be attending a private tour of Yad Vashem and will be meeting with Ukrainian refugees to hear their stories firsthand and develop a strategy to provide solidarity in action to those suffering at the hands of this senseless war.

Blue Card supporter and KISS front man Gene Simmons has said that The Blue Card’s work “is important… my mother was a survivor of Nazi Germany’s concentration camps, and we need you to help the 65,000 [remaining] survivors [in the United States] be able to feed themselves and have a decent life.”

As we head toward the Passover season, we must remember the words of the Haggadah and our sages as we confront the scourge of anti-Semitism and the destitution of war with acts of humanity. “Anyone who is famished should come and eat, anyone who is in need should come and partake…Now we are here, next year we will be in the land of Israel; this year we are slaves, next year we will be free people.”

This is more than just a race for us, this trip is about education, awareness, and supporting the survivor community.

We run for the living, the memories of the past, and the yearning for a better future.

About the Author
Masha Pearl was named Executive Director of The Blue Card, a national non-profit that has been aiding needy Holocaust survivors since 1934, in January 2013 at the age of 28. As Executive Director, she is responsible for a staff of 28 full/part-time and volunteers and oversees an annual budget of $2.2 million.
Related Topics
Related Posts
Comments