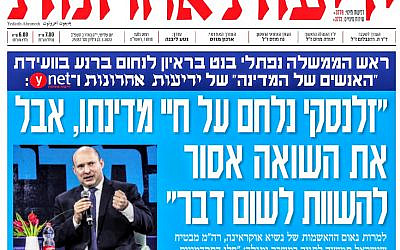 The screaming headlines from Israel’s newspapers said it all, quoting Prime Minister Naftali Bennett: “Zelensky is fighting for his nation’s survival, but it is forbidden to compare the Holocaust to anything else.”

Volodymyr Zelensky was crying for help from his bunker when he addressed the Knesset on Sunday. Yet while Kyiv literally burned, Israelis fiddled with the Ukrainian president’s misguided use of the term, “Final Solution.” How is it that this icon of democratic values and steadfast self-determination, who would have been the envy of Israel’s founders, felt the wrath of Israel over a couple of misplaced words of an otherwise galvanizing speech?

Something is happening here, and it has little to do with the Holocaust.

This overreaction demonstrates that Israelis have no idea what to do with a man who has turned Zionism on its head. Zelensky is the antithesis of what was supposed to happen in a dying diaspora – and in Ukraine of all places, the deadest of the dying diasporas. He represents a new form of Jewish hero, more Mordechai than Maccabee, combining the courage and battlefield prowess of the IDF with the chutzpah and street smarts of Ukrainian-born Golda Meir, whom he quoted in his Knesset speech, along with the transformational, earth-moving faith of another Ukrainian Jew, Reb Nachman of Bratzlav, whom he also referenced. Diaspora Jews are supposed to be disheveled shlemiels and good fundraisers and maybe occasionally smart politicians and media stars. This guy is all of the above and more.

He’s a hero, in the way that Israelis used to be heroes. He’s Moshe Dayan and Yoni Netanyahu – and he’s Jon Stewart too. And, to top it off, he’s a political leader who isn’t standing trial for corruption. Who knew?

Here’s the perfect partner that your child brings home, and the parents are complaining, “Yes, but he’s not a doctor!” And to top it off, they refuse to give Iron Dome as a wedding present, and they want to invite Putin to the wedding.

Zelensky has been pitch-perfect in addressing government gatherings throughout the world. But when he addressed the Knesset last Sunday, he touched that third rail when he compared Russia’s actions against his country to the Holocaust. Specifically, he appealed that Russians are aiming for a “final solution” for his people.

Zelensky was not totally wrong about that. But “genocide” is the word he should have used. There was only one “Final Solution.” For decades, we’ve all had to navigate verbal minefields to avoid using that term. Israeli-Palestinian peace plans always include provisions for a “Final Status” agreement; never a “Final Solution.” Synonyms like “end result” or “ultimate consequence” have found their way into the vernacular to replace the Holocaust expression that rolls so effortlessly off the tongue.

So Zelensky, who lost family members during the Holocaust and who successfully compared this conflict to 9/11 and Pearl Harbor when addressing Congress, and to Dunkirk when speaking to the British Parliament, slipped up here. It was an unforced error but give the guy a break! The energy with which Israeli politicians pounced on this modern Jewish hero who has done more to save democracy than anyone since Churchill, was even more tone deaf than Zelensky’s remark.

It’s even greater chutzpah for the Israeli government to act so offended when the state is now aligning itself squarely on the side of neutrality, at a time when even Switzerland – Switzerland! – has taken a side. They are choosing the way of Kissinger realpolitik when a strong Wiesel-like moral stance would be both morally right and politically prudent, at a time when Congress is voting on a 4.8-billion-dollar security package for Israel.

Neutrality in the face of evil is itself evil; and to Putin, it reeks of weakness. Perhaps a month ago neutrality might have made sense – perhaps. But now, who cares if Israel is the peace broker? Others can take up that mantle. Ukrainians and the world need to see Israel being a true beacon of justice here – precisely because of the Holocaust. Because of the Final Solution.

Zelensky’s analogy was spot on; he just used the wrong words. This battle between good and evil is every bit as fateful as the one fought 80 years ago. Call it what you want, but Putin is aiming to annihilate the Ukrainian people, which incidentally, includes tens of thousands of Jews. This enemy has proven himself to be every bit as craven as the one the allies defeated in World War Two.

Zelensky should be absolutely embraced by his fellow Jews, not relegated to a Hollywood Squares Zoom session with nit-picky Knesset members looking for gotcha quotes. He is the ultimate Jewish hero envisioned by Herzl and the founders of Zionism. He’s the ghetto fighter who survives in the bunker. But they can’t stomach that he’s a product of the exile, a diaspora Jew who has stolen their mojo.

When hundreds of thousands of Jews left for Israel after the Soviet Union fell, Zelensky’s family stayed behind in the land of Golda and Reb Nachman and Bialik. He chose to continue to identify proudly as a Jew and yet won a national election by a landslide. He reduced corruption and antisemitism in his country. His army could give the IDF a run for its money.

And he’s not afraid to take on Putin alone.

All of this makes Israel look like the diaspora weakling begging the Russian bully to return their lunch money in Syria.

Zelensky has turned Zionism on its head, and that’s why Israeli politicians are treating him with such disdain, when they should in fact be embracing him, as everyone else in the free world is, including American Jews across the political spectrum. He got a standing O in Washington. He got a muted Zoom wave in Jerusalem.

There is still time to change that. Ukraine still needs what Israel has to offer. And this war has not yet reached its final…resolution.